After catching nothing last weekend a torrid week at work was the last thing I needed, our new computer system was not working well in all areas and very long days ensued, by the last day of the month we'd not been able to invoice all our sales and I reckon £400K+ was stuck. I needed a a break and a good weekend. Got bait from Thatchers on Saturday, sorted a few bits and bobs out and then pegged out Jack Whites, and I wrote in Polish as well as English on the signs to say water closed. I was chuffed later that the Gas won away from home and a nice bottle of red to celebrate set me up and the first part of the weekend was good.

I woke up Sunday and the heating had kicked in, it was a proper autumn morning cold misty and the sun shining through, no matter how tired I feel on days like this I just feel alive. Had to take a picture later when on the bank. 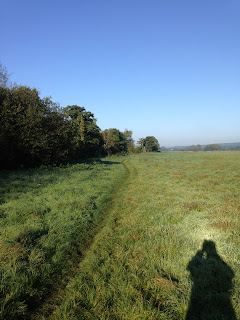 This year we have 5 teams of 8, and that makes pegging fairly easy, with 15 at Swineford, 15 at the Crane and 10 at Jackies. Liam was drawing for our team and I hoped he'd do me a favour and keep me away from the Crane for a change. Fair play he did, and I was end peg at Swineford, one below the beach where Paul Purchase had taken 25lb on the Commercial House. Paul told me he had a lot of fish but caught 3 bream in the last 3 run throughs on the pole that day. I drove to Saltford and met up with Glenn Bailey and Shaun Townsend who were also in my section. We took the long, but flat walk along the cycle track and after getting across the bridge and kissing gate I had a few more hundred yards to go. Glenn was on the famous Bitton Brook, a peg known for chub normally, Shaun was on on the Beach peg and I was below him. Later we were also joined by Craig Fletcher below Glenn and then Mark Williams was below Craig. This is how my peg looked. 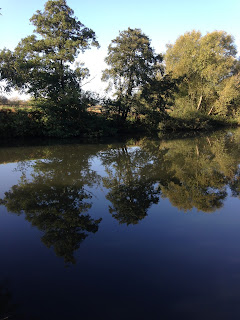 The river had a tinge of colour from the storms of yesterday, and with bream coming from here before I was going to make sure I gave myself a chance of catching one. I set up a gbait feeder first, then two pole rigs, a 2g with 20 to 0.10, and a 4g with 18 to 0.12. That was it today. The water in front of me was dead and I had to go 11m to find a bit of flow, and I opted to fish 13m. It was not straight forward as the flow goes slightly away from you and the river got slightly deeper the further you went down. For that reason I decided I would ball it and probably not loose feed but just top up with gbait. On the whistle I threw in 14 balls containing plenty of caster, hemp and a small amount of worm. Starting on the 2g rig with caster I had about 8 trots without a bite, onto a single maggot and started to get the odd small dace, fish which were at the most an ounce. After an hour I might have had 1 1/2lb of these little dace, I was certainly not bagging and when Glenn told me had had 5lb of dace I was already well behind. I topped up with the odd ball of gbit packed with hemp, caster and worm and the second hour produced a few more dace, plus a few roach and little perch but again the fish were small. After a few top ups the peg just went really hard and I chucked the feeder out for a bit, but the tip never moved.

Back on the pole and the rest had done no good, it was dead. It was now 2 hours to go and I was well down the section. Time for a gamble, and I reballed the peg and put plenty of caster and worm in the balls in the hope of some bream. Straight out over them with the pole looking for some early small fish,  but nothing no bites, I shouted to Shaun I've blown this big time! I tried the tip again and as before it was no good, so I decided to drop it in over the pole line. I had a couple of small raps indicating small fish, so I went out with the 2g rig and as soon as the float settled it went under, a 3/4 oz roach. For the the next hour I had a bite every chuck from small roach, dace and the odd better roach. It was my best catching spell of the match by far. It then started to go iffy, and I tried my 4g rig again fishing over depth with double red. I had a few small roach and perch on this, and then with 15 mins left I finally had a better fish on, turned out to be a hard fighting 2lb skimmer. With 5 mins left the float went under again and 1lb skimmer was my last fish of the match. Shame they turned up so late, but a nice way to end and I thought I had 12lb.

I had the board and we weighed from Glenn first, he had a busy day on the pole with just an ounce under 18lb which was 200 dace. Craig Fletcher had 2 nice chub on the waggler and with his bits had 14lb+, Mark 8lb and then Shaun next to me had 13lb 9oz. I was last of course to weigh, and was happy that my net went 13lb 10oz, although it would be fair to say that Shaun wasn't lol! Alas only 3 points from 5 and I needed the skimmers to show up earlier. Everyone in this section had a hell of a lot of fish, but they were very small. I guess after we get a bit colder weather this small fish will disappear, but it is fair to say that the river is full of small dace at present.

Another nice long walk back, by the end I was a ball of sweat and had drunk all my drink, I couldn't wait to get back to the rugby club and grab a cider, which Glenn kindly bought. Lots of small fish had come out and very few better fish it transpired, there were plenty of good weights though.

1st Graham Hunt with 18lb 14oz, dace on the whip from the steps at Jackies
2nd Glenn Bailey 17lb 15oz, dace on the pole.
3rd Liam Braddell 16lb+ dace on the whip below Graham (Liam is still drawing his wotsits off)
4th Andy Ottaway 16lb 4oz dace and some roach on the pole peg 18 Swineford.
5th Warren Bates 16lb 1oz next peg to Andy on 17 (with no one on 15 as he told Mike Withey he was on 14 the wrong peg to fish on!)

Thatchers won the day, with Bathampton second. Swineford and Jackies fished well again, but the Crane was a bit of a struggle again it seems. Oh and pike were a problem for a lot of anglers today, I had 3 fish grabbed but got them all out.

Foot note, Shane Caswell is having a very consistent time on the winter leagues, and he has been last in section in three matches now, I'm sure his luck will change as he can catch fish if they're in front of him.
Posted by Tim Ford at 20:56