Another very hectic week at work meant I was looking forward to the weekend. I had to wave goodbye to the wife Friday as she headed up to Manchester to spend the weekend with my eldest daughter Lucy. Ian Pauley did me a big favour by picking up my bait from Thatchers on Friday, I was feeling pretty ill again so was glad I could rest up. Had a few ciders Saturday afternoon with Glenn, Mike Nicholls and Geoff Francis, we had a good laugh and I wobbled home.

I woke Sunday morning feeling a tad dry, and a couple of pints of water were downed and helped immensely. Onto the rugby club for a nice breakfast and talk was of how hard the match would be with a a low clear river and bright sunshine forecast. Lucky Liam Braddell did the team draw for us, he came back with a decent draw I thought. I was on peg 24 which is a few below the block house and a peg which I've had before and has options depending on the river condition. It is a bit of a cow drink so you can get in the peg nice and easy and set up close to the water. I was the first peg in C section and I was happy with that as I thought the pegs below would be tricky. The river was very slow, and on this peg more of the flow is across the peg and there is a chance of chub. Ivan Currie had this peg a while back and had some chub, and I was confident of catching a few. I set up a 2 1/2 swan waggler with a 20 to 0.12, a maggot feeder with 17 B711 to 0.148 exceed for the chub. I only set up two pole rigs, a 1grm pencil float with 0.09 to 20 and a 1grm float with 13B711 to 0.16 for chopped worm. I didn't see the point of other rigs as the river was so slow I could hold back on the pencil float!

In the section above me on the next peg was Nigel Wyatt, and below me was his travelling partner Geoff Surman, two avid river anglers and top men. I began the match balling in with gbait, 12 balls went in today with just a little bit of hemp, caster, pinkie and worm as I didn't want to over feed the peg. I fed maggots to the far side with a catapult and kept that up all day. Out with the pencil float and with a single red maggot on the float buried as son as it settled, a 1oz roach was the culprit. Next drop in I had a bite I thought but hit nothing, but I was really struggling to see the float due to bad light. I did get another little roach, and then another was on but a pike grabbed it, I held tight and eventually the pike let go. A couple of small dace followed and then another pike grabbed a fish and bit me off. New hook length on and out again for a little perch and a dace and then a pike again. Another hook on and then a few more little fish before the 5th pike hit on the hour and this killed the pole line. Nigel Evans called me and spookily he had also been hit 5 times by pike, but he was still getting bites. My pole line was dead not a sign. I was thinking about the waggler / feeder across, but on the boat just below the tree a couple turned up and started up a generator and began working on it, great! A little later as the relaxed they started to get a little lovey dovey, which Darren Gillman spotted, but it came to nothing lol!

Time to try the waggler which I had set at 5ft deep, I had a 30 minute spell on it which yielded 2 bleak and a few missed bites from tiny bleak. I fed a chopped worm line down the peg on the pole and then tried the maggot feeder. I tried this for about an hour and had a few little knocks which resulted in a 2oz perch and a roach which a pike grabbed but let go of. Then I had a little rattle on the tip followed by a massive wrap round, got to be a chub, it felt like a very good fish but halfway back it came off, but as I wound the feeder in I saw I had a roach, well 3/4 of a roach, another bloody pike had struck! I thought I'd give the feeder one last chuck but had nothing, until I wound it back in and the poxy pike grabbed it, but I gave it some severe tooth ache as I pulled the feeder free! Ian Pauley was on peg 22 and he rang me to say he had taken 5lb of roach early but his peg had gone stone dead, as he put the phone down on me I had a pike take another fish and he told me after I heard you say "effing pike". However, in the top pegs in his section they were catching big roach, hybrids and skimmers,

The middle of my match was woeful, and the pole was dead, 1 tiny perch from the worm line, and a few bleak and a bonus 4oz chublet on the wag were all I managed. I thought I had 2lb in the net and was probably last in the section and I just didn't know what to do. With 90 mins to go I tried the pole with the pencil float again, I was now on a 22 to 0.09 (hook changed earlier after a few pike strikes) and had a couple of dips on the float but nothing was hooked, I took the maggot off and put a pinkie on....Bingo! The float went under properly and a 3/4oz roach was swung out, next drop in the same result, and the next and the next. Basically for the last 90 mins I had a small roach every cast, I even managed to get a few on the maggot and although the biggest was no more than 2oz I was flying and amazingly I had no pike! I did try the waggler quickly as I thought I might have fed the bleak off, but as soon as a bleak took the bait I gave it up and went back to the pole to carry on catching the little roach.

When the match ended I was left thinking what could I have caught if it hadn't been for the pike, I reckoned I had to have now 5 to 6lb but wasn't to sure as the fish were small. Only Warren Bates in my section was admitting to 4lb so it looked like I was going to do OK today. Ivan Currie and Derek Coles weighed me in and I was quite surprised when they called 7lb 6oz. Ivan took this picture for me. 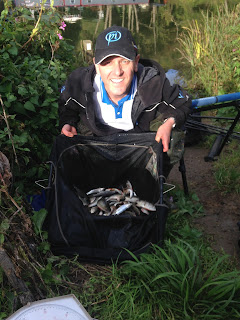 As it turned out I did win the section comfortably as Warren was 2nd with 4lb 14oz. I think he may have said something to me as I told him I only had 4lb, well it was another wind up after my wind up about him on my blog last week lol! The section above me was much better and it saw some proper quality fish caught in a couple of pegs with first and second in the match coming from there.

1st Andrew Trudgian 26lb of skimmers, hybrids and roach to 1 1/2lb on the pole from peg 16. Well done and well deserved as Andrew has put a lot of effort in the last few years to get to grips with the river.
2nd Shaun Townsend 19lb of quality roach on the crowquill on peg 14. You can't put this bloke on fish as he will always do well, though he did get his ass cut by Andrew!

3rd Liam Braddell 15lb of mainly skimmers and bream from peg 107 on pole and feeder.

On the team front Bathampton won the day beating Thatchers by 1 point, so we are tied at the top after two matches.

I was pleased picking up £50 for winning the section and pleased that Liam bought the beers! It turned out that I was in the lowest weight section today, with I think all other sections being won with double figures of mainly roach. Glenn was on 78 and he had a perch of close to 3lb today, a bonus on the day. We really need to get some rain I feel to get the bigger fish to have a go, but you cannot complain getting plenty of bites from small roach, and other than the bloody pike the river goes from strength to strength. Did I mention Ian Pauley in my blog today, he did ask that I mention him as he said he is an avid reader of it. I had to mention Ian as he and Nigel both endured severe pike trouble, I thought I had it bad but they both went through 20 hooks, and Nige had pike swimming around his swim just under the surface. bad luck chaps!
Posted by Tim Ford at 20:45