There was no blog last weekend as I had a week away with the wife in Cape Verde, and what a great week it was. It came at the best time as I was feeling quite stressed and a tad unwell after a lot of work and other issues, a week on a sunbed or drinking or eating sorted me out and I really felt great. The place is lovely and I would go again. Nice sunsets too, but I'm no David Bailey lol! 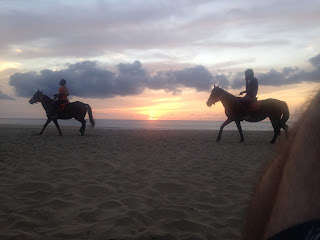 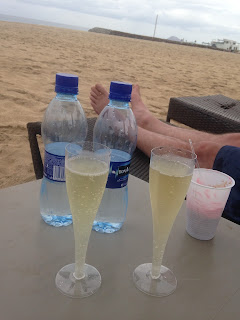 Back to this Sunday and the match, and after not a lot of sleep after a late return I was woken up by one of my cats that had shit on the door mat, nice start to the day. Got to the rugby club and grabbed a bacon and egg roll and caught up with the lads and Lee Trivett gave me my bait which was handy. Lucky Liam was doing the draw again, but I had kept away from him as I always seem to get dross pegs from him. Not today though! Liam came back with the pegs, which in the main I didn't think were that great, but I was on B2 which meant peg 16. Three weeks ago on the commercial house Andrew Trudgian had 26lb of big roach, skimmers and hybrids off this peg to win the match. I had to be happy, but in the back of mind I was worried that the fish had a) moved or b) not taken kindly to being caught. I have seen this before up Newbridge where one week these fish show then disappear.

I got to the river and parked behind my peg, nice, on peg 14 was long time friend Darren Gillman, this peg had 19lb last time out. On peg 18 was Steve Hutchinson who had forgotten his bait and scrounged what he could from all of us in section. Lee Warden on 20 and Alan Jones on 22 made up my section. The river looked very clear and had little flow, but it was also covered in leaves and whilst I did set up a crowquill I couldn't see much else other than a pole approach working today. This picture shows what leaves there were, and believe me it was at times a lot worse than this. 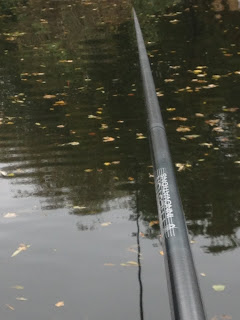 The team had bloodworm and joker this week, and although I did not realise we had this and didn't really want it, but I decided to put some joker into my original balling in mix as it might help. Twelve balls went in, and I decided to start on the 2g rig straight away. Not quite sure how but I managed to tangle to hook length badly on the first cast, so I put that up the bank and picked up the pencil rig and stuck a caster on the 22! The float settled and buried, roach on! Pike on! FFS!!! New hook length required already and not the start I wanted. Back out on the pencil and two 4oz roach in two drops had me upbeat, but after these the fish no bites, on maggot it was 1oz specimens. I could get a bite every chuck on a single maggot from roach or hybrids but I was not going to do a big weight with these. For ninety minutes I had caught these fish and despite trying the 2g rig over depth I could not change the size of fish. The pike then came back and after following a few fish in struck again and did me. Bites then went right off, and I cupped 2 balls of gbait in to try to revive things. It wasn't any better but then on the pencil I had a 8oz hybrid and I thought time to go positive. I went on the 2g with double caster and lowered the rig in and held it still, after no more than 5 seconds the float buried and elastic came out a fair way. It was a skimmer of about 1lb, next chuck a 12oz hybrid, next a 14oz roach and then a 1 1/2lb hybrid, oooherrrr! Of course after 4 in 4 drops the fish backed off, but I stayed positive and 10 minutes later another 12oz hybrid graced the net before the bites stopped so I fed  couple more balls of feed.

The peg didn't respond to the feed as I hoped it would, and so I went back on to the pencil with a caster, it was a bite a chuck but only from the 1oz roach. I decided I had to go back to the 2g rig, trying with double red maggot this time I had a 12oz skimmer but then just a couple of small perch and a roach which a pike grabbed. I spent most of the remaining match on the 2g rig thinking that I was doing well in the section and that catching the odd better fish was better than a 1oz fish every few runs down. It was the right thing as I did get the odd hybrid but also hooked a large fish which I pulled out of after it tore off. About thirty mins from the end in almost the same place I hooked another big fish which stayed deep until I had it in close, I was thinking bream, then all of a sudden the float shot out and the rig went horizontal as a big fish jumped clear of the water and shed the hook. I am convinced it was a sea trout about 4lb, and that seemed to kill the peg. I finished the match on the pencil rig and took two 6oz hybrids on the drop and a 2oz roach on the whistle.  I had a busy day, some lovely stamp fish which I think would have had a proper munch had there been some flow and a bit of colour. I enjoyed it and had to work at feeding and presentation as the fish did not give themselves up easily. I thought I had 15lb.

I had the scales and Darren the board, so we set off to Alan and he weighed 4lb 1oz. Lee Warden had 5lb 1oz (but had bumped two decent fish on the tip), Steve below me had 4lb 14oz and all tight between them guys. My fish took the scales round to over 17lb, and Darren called it at 17lb 7 1/2oz. That's 9lb less than Andrew had 3 weeks ago, a nice net none the less,. 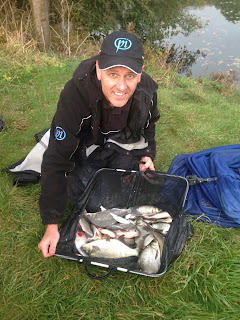 Just Darren left to weigh in my section who was admitting to "6lb and I've looked at them possibly 7lb" (PMSL) Darren had a nice net of roach for 10lb 8oz, that's also 9lb less than Shaun Townsend had off this peg 3 weeks ago! 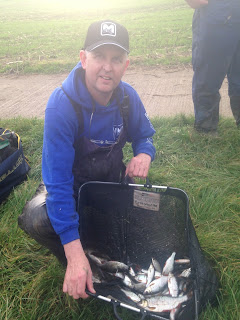 Section win bagged for the team I was keeping fingers crossed I would make the frame, there were two 17lb+ weights up in the little field but I was told less than me. However, one of the weights was exactly the same as mine, and it was caught by Ivan Currie on consistently good peg 7.

Back at the rugby club and it was soon apparent the river had fished tougher than last time but there were still some decent nets.

Bathampton did amazingly well on the day and had 35 points out of 40 to win the day, my Thatchers came 2nd. After 4 matches Thatchers and Bathampton are tied on 6 points and only 1 section win seperates us!

Pike were once again a problem for many anglers (unless your name is Glenn Bailey and he seems to draw pegs with no pike all the time lol!) and today my heart goes out to Shane "Kenny" Caswell. Shane was on peg 56, and whilst Glenn on 54 caught small fish regularly and Mark Harper on 52 caught nice roach Shane had 1 perch after an hour and had lost every other fish to pike. By the end of the match Shane had landed 12 pike!!!!!! To rub salt in the wounds Shane hooked a 6lb bream on the feeder with 30 mins left, but this fish shed the hook before he could land it. Gutted for you mate, but your luck simply has to change, but it might be helped if you stop putting chopped herring in your gbait lol!

I'm dropped for next match which is on the canal, so they can shove it, only joking lads! I need to get the garden tided up so no fishing for me week. Next match for me the newly named "Bill Milton Memorial" for the Poppy fund, otherwise known as the Poppy Match, would be nice to get my name on the new trophy, but I may have used my luck up on that match.
Posted by Tim Ford at 20:00