A weekend not on the bank, and looking at the frost this morning and speaking to Glenn who after an hour on the canal had 4 fry I was happy with my decision! Funny as last week I was sat fishing in my T shirt at Newbridge, seems summer went straight to winter.

Finishing off the diary from 1997 now, I had the Silver Dace Xmas match on Sunday 30th Nov, it was on the K&A canal. I drew on the newly concreted stretch at Warleigh and struggled for just 14oz. The place to be was Darlington and in the town, not much changes there then. The following day after a lot of rain the river was only just inside its banks, then we had a few nights of hard frosts. It was not conducive conditions to be on the river, at Frys, for the Commercial House Xmas match on the Saturday and we all knew it! I drew the lone tree peg, and all I could fish was a feeder, I fished a gbait feeder about 1/3 across with a 16 to 2lb maxima hook length. Trying varying hook bait combos I eventually had a bite on 2 worms and 2 casters, a chub of 14oz was landed and that was all I had. One other fish was caught in the section, so it was as tough as expected.

Glutton for punishment I fished the next day on the Bristol & West Xmas match. I drew a peg on Chequers straight just past the cow drink and below the last tree. It put me off a bend and the water despite being shallow was float fishable. I fished a stick float with a 20 to 0.10 and fed maggots, I just kept running the float through and out of the blue I got the odd small fish, a bonus 2lb chub doubled my weight, but then in the last 2 hours I never had a bite. This match was fished at Swineford and Crane too, so it was a decent turnout, but many had really struggled to catch anything. My lowly 4lb 4oz won me the section and got me 6th overall.

Sunday 14th December, the Bathampton Xmas match and the one you really wanted to win. I didn't think I drew that well getting peg 176, and I finished up with just 1 bleak and 1 roach. However, I got battered by the angler on peg 175 who had 5 bream! I went home with my tail between my legs lol.

On Wednesday 17th December I recorded that we had 4 inches of snow, but it must of cleared away as by Sunday I was back out again hoping for a better day on the Docks Xmas match. I didn't record the peg / area I drew, but I had 3 skimmers on the feeder for 6lb 13oz. Pegs at the bottom of Welsh Back were the best (Dockers Club) and those anglers caught a lot on worm.

Jerry Pocock ran the King Billy Xmas match (he still does) this year on the 28th Dec, and it was on the Docks. I was hoping for a better draw, and as nearly all the pegs were in decent areas I got my wish by drawing the peg that had won the Docks Xmas match at Welsh Back. I did set up a pole but never had a bite on that, and concentrated on the gbait feeder fishing an 18 to 0.10. It was very hard going and was fishing much harder than the last match. I cast the feeder about 2/3 across and had to wait over an hour to get my first bite from a little roach. The fish were very reluctant to feed, and the only bites I had came to double red maggot. Going into the last hour I had 5 skimmers and was going to get a decent prize, but then another bite and this time a big skimmer and that was crucial. I ended with 7lb 9oz to win the match. 2nd that day was Shane Caswell and 3rd was the late Bob Warden. I know that because I still have a cutting from the evening post which was written by Roy Garland, and here it is with the photo he took. 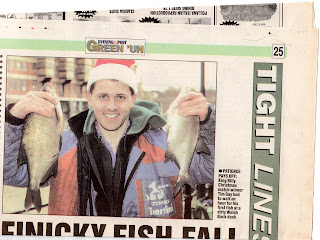 One more match to finish 1997, and that was on New Years Eve, it was at Newbridge in the Veals Classic League. River was up and came up a foot during the match. I drew peg 2 in the little field and was cursing my luck thinking I had no chance from this shallow peg. I fished a gbait feeder 1/3 the way out and had 4 roach and a small skimmer here, but half way through the match this line was no longer fishable. I had to come in close and drop the feeder off the end of the rod using a 16 to 1.5lb maxima. Two white maggots or a small worm seemed the best and I had 11 eels in close as the river got badly coloured. My final weight was 4lb 4oz, and I was placed 5th on the day and with one match left in the league I was lying in second place, could I hold on or go one better?

Back to today and my next match is next Sunday, the Bill Milton Memorial Match (Poppy Match). Sadly there appears to be no rain in the forecast and with a low clear river the draw will be very important. Pike usually count in this match, and with the amount we have been hooking I can see a few of them helping anglers make the frame!
Posted by Tim Ford at 11:49