Getting anything prepared for this match was going to be pretty much impossible, I had a full on week and left work early Friday to take a train to Chesterfield. I was travelling with the wife and met up with my eldest daughter. Nice place Chesterfield, the town was full of bars and places to eat. Saturday we met up with Mark Jefferies and his son Mitch, had a few ciders and watched Rovers lose again. A few more ciders to drown the sorrows and then I caught the train back with a few more cans. By the time I was home I was tired and a tad wobbly.

Sunday morning alarm at 6:15 was a shock, and I felt a bit dehydrated, not sure why.... Grabbed all my gear and some gbait and got to the draw in time to have a breakfast. Glenn had picked up some bait for me so I paid him and my pools and waited to see what peg would be coming my way. B2 didn't tell me much, mainly because the pegging sheet (if you can call it that) was just one peg in every section, so had to wait to get to the bank to find the exact spot. I drove down and passes Mike Withey on peg 16, Rich Lacey on peg 18, both could throw up bream today I thought. The river had some extra pace and just a bit of colour, not sure how it would fish like this. On peg 20 was Vincent Lunn and he was the first peg in my section, I was next peg and behind the pumphouse. I've drawn this peg a few times and I've never done amazing off it, would rather not draw it if I had the choice.

My feeling was that this was going to be a day when bream would be needed, and so the feeder rod was first out. I know this peg can be snaggy, but today I didn't get any problem fishing just past halfway. I set up with 15 B711 to 0.165 exceed. The next rod out of the bag was a 13 foot Normark Microlite to which I attached a 3 1/2BB stick float for fishing about 2 rods out, a 20 to 0.117 exceed was used on this rod. I had to get my box in the water to fish this peg as there are reeds growing out, as soon as I got in I noticed how cold the water was, not a good sign. I finally got the box set up and got as much as I could next to me. 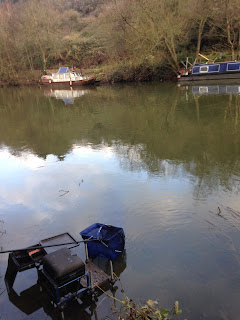 Rich Lacey walked down just before the start and asked me how I thought the river would fish, and I said I just didn't know, but I was concerned at not seeing any fish top. As Rich walked back I shouted out we should have a pound on who caught the first fish, he said yes but lets make it buy a drink, sorted!

I began the match casting the feeder out with 3 red maggots on the hook, all the while I was throwing hemp, maggots and casters to prime the stick float line. Third chuck on the feeder and a decent rattle on the tip, when I struck I was connected to a small fish, it turned out to be a 4oz roach. A quick call to Rich and I was a getting a free pint later lol! Sadly that was not the start of more bites, and in fact after an hour all I had added was a 1oz perch. With plenty of bait put through the feeder I thought it was worth looking on the stick float line. A couple of roach and two perch on the stick in about a dozen casts wasn't that bad, but another 20 mins without a bite  meant it was time to go back to the feeder. My first cast back on it and I had a bit of sharp tap, I struck but there was nothing and the bait was still OK. I cast again and after about a ten minute wait I had a good bite, a good fish was hooked but I soon realised it was not a bream and was a chub. I gave it no quarter to keep it away from the reeds and soon had a 2lb chub in the net. It was about midday this happened and still 3 hours left.

Unfortunately there is nothing more I can write about my day as I never had another bite, all hook baits were ignored and the stick was also dead. Meanwhile above me Vinny connected with 4 bream and a few skimmers and won the section with 22lb, the lad below me had 1 roach and was last in the section, hmmm winter fishing.  Further down the section there were odd bream and some decent roach and small chub all caught on the feeder, with Jeff Surman coming 2nd in the section with just under 10lb. Andy Britt had a nice 6lb bream to get him out of jail, hooked in the the fin I believe. I only beat 2 people in the whole section and was last in the A div, oops.

Winner today was Rob Manns who was helping out my team, he drew peg 58 on the gas pipe, the deepest peg on the river. Rob had 11 bream for 60lb, Rich Lacey came 2nd with 7 bream for 35lb, I think Paul Purchase was 3rd with 30lb from peg 36.

Well it was a disaster on the team front today, as we were one short we needed good results, but didn't get them, we are now bottom with 2 matches left to go in the New Year.

No fishing for me next weekend, and that's probably it for river fishing for a while now.
Posted by Tim Ford at 20:07