After yet another hectic week in which I forgot to order bait but Mat Challenger sorted me out late on Friday, cheers. I also had just a couple of hours to tie up some rigs, and I used my top sets from last year, elastic seemed OK after pulling it a bit. Loading the car up Sunday morning it raining heavy and only 4C so my hands were froze as I set off to the draw in my car.

The match had been pegged with some sections int he town and the rest out at Bathampton, A draw in the town would most likely be needed to get in the frame, or an end peg. Team draw done and I was over the moon to find myself on A4 in the Long Pond in the town. I hoped that I would be on a few fish today. On the end peg A5 was Nige Evans, On A3 was Darren Gillman, no mugs here then.

I fed all my lines at the start of the match and began short on the bread punch, Nige was already catching 2-3oz fish on this, and I had 3 roach but then a boat came along. It didn't really affect my peg but it went through Niges, but Nige carried on catching and I didn't. I had to feed more bread to try to make something happen. I took another 3 roach then it went quiet again, after a while a positive bite was met with a lot of elastic coming out. I landed a near 1 1/2lb skimmer. By the end of the first hour I had taken a couple more smaller skimmers and some more roach, the bread line died soon after. Trying my 9m line with a pinkie I took four 6oz skimmer / hybrids, then a little fish. Then as Hughie Evans was watching me I struck and my elastic snapped, doh. It was only a little fish and I managed to retrieve the rig minus the fish. This line died soon after and only gave 1 roach during the rest of the match.

My first look out to 13m was with 3 bloodworm on and the float soon buried, skimmer, and two more soon followed. Bubbles started rising now, and there were lots of blows showing me there were feeding skimmers still in the swim. I took another two in the next 30 mins but the next 30 mins despite the blows and me trying different hook baits I had nothing! I wondered if the skimmers were off the bottom so I fed another ball of joker on the 13m line. I tried the waggler out about 20m where I had been loose feeding casters, I took 3 small roach and though it wasn't great I was encouraged.

Nige had now taken some skimmers but he was still catching small fish which I was not. Back on 13m and I persevered as the blows were back. After a couple of smaller skimmers on 3 bloodworm I tried just 2 on the hook, this seemed better and I had another 5 skimmers a perch and decent roach. With 30 mins left the blows stopped and the fish were gone, I fed some more joker and went on the waggler again. I took some roach and hybrids on this, up to 4oz, and with 15 mins left a very finicky indication had me thinking it might be a small fish so I struck, but the rod bent nicely! I very carefully played the fish in, and it came in easy until it was under the rod tip, but I finally slipped the net under a 2lb skimmer. A few more small fish and then the match ended, the 13m line never did show life in the last 30 mins which is why I stuck to the wag.

It was going to be close between me and Nige, but he kept saying I had hammered in. The scales came up with Darren having a nice net for 10lb 1oz. My turn next and they went 15lb 12oz.  Nige was last to weigh and I thought he would beat Darren, but he was closer to me than I thought with 14lb 12oz, Nice fishing, especially considering the weather over the last 3 or 4 days.

Back to the results and the canal had fished well overall with 5 of the 10 sections won with double figures and 7lb was the lowest section winning weight. It turned out I had done enough for the match win and I was chuffed with that, Nige was 2nd, Mark Harper 3rd 12lb and Tony Gilbert 4th with 11lb. 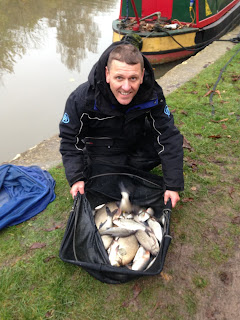 Bathampton won the match today, but Thatchers came 2nd and as a result won the league by just 1 point from Bathampton. A very tightly contested series indeed.

A nice way for me to end the league, I had to miss two matches, but was very happy to get in amongst the fish on the canal, drew a dolly today but really enjoyed it and felt like I fished a good match catching on all lines and only losing a couple of better fish which can happen on a peg full of skimmers lol!
Posted by Tim Ford at 20:56