Middle of the week I had not decided whether to fish the weekend, but with a few mild days forecast I decided to give this match a go. I of course went with the choice to fish the river at Newbridge, and expected to fish for bream.

The draw was at the Crown in Saltford, this pub / restaurant has recently been taken over and it seems it has gone a bit more up market, i.e. prices are higher. Managed to get a breakfast which was not bad but not worth £7.50. Whilst I was eating it the draw was taking place and so I shouted to Dean Harvey to draw a peg for me, he did and pulled 61 on the Norfolk Reeds. This can be a brilliant peg but this season it has not shown its usual bream form, with just odd fish coming from it. However, last match on the river peg 59 just above had 60lb of lids so I hoped they might have dropped down, Callum Dicks had drawn peg 59 today.

I drove to the river and saw Shane Caswell on peg 16, Derek Coles on 18 (a good bream peg) and then there was a gap till Lewis Walker on peg 30.  Warren Bates was on form peg 36 and on the end of the straight Dean Harvey, both their pegs had been fished on Weds and lots of bream were caught.

I had the longest walk of the day but don't mind that as I like to keep fit, I arrived at the peg and got
my waders on as you have to get in the water, and got my box in nice and comfortable. The picture below was taken after the match when I had dragged my box up to the edge. 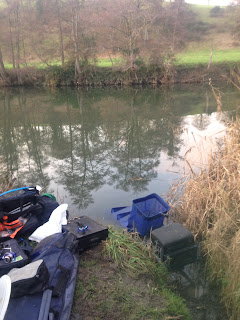 I set up my feeder rod first with a 14 B611 to 0.148 exceed, I also set up a 4gm pole rig with 16 to 0.12 to fish 13m out, but rather than ball it I was going to feed balls of crumb and try punch bread. That was it nothing else was set up. Chris Ollis came for a chat before the start, he was in the bream hole on peg 54 and was trying to remember the last time he had drawn it.

When the match began I had about 10 chucks with a feeder about 2/3 the way over, I had intended to to feed chopped worm and caster in the feeder, but.... when I opened my worms they were all dead, oh dear. I had about 15 lobworms with me and for what it was worth chopped them up. After feeding that line I threw 3 balls of crumb on the pole line and tried a 10mm punch, a few run downs were fruitless, so I tried a 6mm punch and had a couple of 4oz roach. It didn't seem right though and I put 2 maggots on, I took another three roach and a chublet but that was it and it was now an hour gone. I picked up the feeder rod and put 3 dead reds on, the feeder was only in 20 seconds when the tip rattled and jagged about. Missed it, and missed the next, but then a little roach. I was surprised by this and it seemed the feeder line was full of small roach and perch, although hitting the bites was tricky. Of course I was never going to do any good catching these fish, but I just had to hope I could feed them off / the bream would move in.

I tried the feeder on the pole line a couple of times but it never worked, and I spent most of the match fishing on the far line. As well as little fish I had 2 chub about 1lb each on this, a 12oz roach and a 12oz perch, not really good signs for bream. I knew bream had been caught by Dean and Warren, Derek and Mike Goodhind and so I had to keep going for slabs. At 2:15pm nearly 4 hours after we started I had a proper bite and a 3lb bream was the culprit. It would have been nice if the tip went round again next chuck but it didn't, in fact at 3pm I had my next decent bite, a classic steady drop back and bream number two was on. At nearly 3:15 I had another slab, but that last 15 mins I was plagued by small fish bites again.

Dean Harvey came up with the scales and I had 18lb 12oz, happy enough as I had more bites than I 'd expected. Callum above me had 1 bream in his 11lb, and then Chris Ollis on 54 had 5 bream for 21lb, most of those came in the last hour. I didn't see the guys weigh but Dean Harvey had about 11 bream for 62lb, a good weight, but Warren then beat him with 66lb. However, the fish that won it for Warren was a spectacular 10lb 6oz barbel!

Back at the Crown Warren and Dean were clearly the top two, Derek managed 3rd with 27lb of bream but he and Shane Caswell on 16 were plagued with boats. I was in stitches as Shane told me of his day, watching 100 Santa's racing in boats, sat on his pole line, listening to the same songs played all day, oh and drone buzzing about overhead.  On the canal Ivan Currie had the top weight with 11lb (read his blog for details) and Darren Gillman was 2nd with 8lb.

After the prize giving we had the raffle, and no surprise I won nothing again, neither did Shane to make his day complete lol. Funniest part was the last prize, it was won by Darren, a chocolate santa. As he made his way to pick it up someone threw their raffle tickets at Kev Dicks and caught him in the face. Kev assumed it was Darren and smashed Santa into a mess. Darren responded by tipping up all the undrawn raffle tickets over Kevins head and they were everywhere! 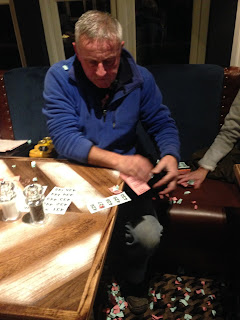 One more match before Xmas, I'm going to give the Viaduct Xmas match a go, not been for ages and will have to find those barbless hooks out and hope for a bunghole draw.