I fancied a change this weekend on what would be my last match before Christmas, and fishing the Saturday suited me and so I chose to fish the Viaduct Xmas match. My preparation was slightly hindered on the Friday, this was mainly due to me having a very late night Thursday (3am) at a industry awards dinner. I found some barbless hooks, and threw in some pole rigs which I had used before.

It was a foggy start in Bristol Saturday morning, and about 4 Celsius, there was not much chance of seeing the sun today so 8 or 9 degrees at most and a few layers required. The drive down was easy and I got to see a few thousand starlings flying overhead from their roost to their feeding ground. I arrived at the fishery with 20 mins to spare and parked up near the bottom of Carey lake, as I got out I saw a carp roll in between peg 105 and 74, and then another. You could see carp moving just below the surface, but the talk was they showed the same last match and didn't feed. I picked up some bait from the shop, paid my dues and said hello to my fellow anglers. A number of anglers told me the pegs that would win would be at the bottom of Campbell, i.e. 110 and 132. I got in the draw queue and those pegs were still in there when I drew, but alas I missed them. Peg 96 on Carey was to be my home, one that can be very good as there is a lot of water to go at. Steve Long said the carp had not really been showing there but they might have moved. Adrian Jeffery told me it did not produce a carp on the Thursday, not really selling it to me then lol, but I was still happy with the draw.

As I walked to my peg I passed Dan White on 105 where the carp were still showing themselves, I tied to video them but I cocked that up it seems. Setting up on my peg was simple, a straight lead with 0.16 to 16 PR36 for hair rigged baits, a waggler with a 18 PR456 to 0.14, and a couple of pole rigs one for gbait at 14.5m and one for for fishing 16m off to my right where I fed positive with caster and corn and never had a bite lol.

At 10:30 the match began and I fed 3 balls of gbait on the pole, and then decided to chuck the lead out to see if there were any carp signs. I started with meat and chucked about half the maximum distance. 15 mins nothing, so I chucked further, 15 mins nothing so I chucked further. After 30 mins Chris Fox on 100 had a carp on the waggler, and not long after Roland Lucas on 99 had 2 on the lead. No bites or liners for me, and it was very quiet around the lake.

After an hour of nothing I chucked the waggler out casting to various parts of the lake with double red maggot, just hoping I might drop the hook bait on the nose of a carp. It didn't happen but I did catch a small roach to break the blank. Back on the lead and trying bread, corn and meat it was still dead. At 12:50 I was on the lead on corn and the tip went round and a carp was on. I was surprised how hard it charged off and it gave a good account of itself. I finally netted it, a Carey mirror around 9lb. Next chuck and I had a slow liner which did not turn into a bite, but that was a good sign I thought Then the angler on my right, Paddy, had a double figure carp on the waggler, then Roland had another. The angler on my left Pete Denslow had been on the pole for a while but chucked the lead as it seemed the carp were waking up, he had liner as soon as he put the rod down. Next cast he had a carp on, but lost it halfway back. Unfortunately this was the end of the action as far as the carp went.

The only fish I caught for the remainder of the match were the odd little 2oz skimmers from the gbait line. It was fizzing most of the day but I never had a sign of a bigger skimmer, and although I kept topping it up I never spent aged on it. The last hour the light was poor and I was struggling to see the float on the pole, knowing that I needed more weight I sat on the lead, but I just had a couple of the same tiny skimmers.

The match over and it was clear this lake had fished hard, pegs 85, 86 and 88 had no carp, Bob Gullick on 90 managed one with 15mins to go. The scales soon arrived, the carp had swam off in Dan's peg and he only had one, Roland Lucas was clear winner on Carey with 5 carp and a few silvers for 49lb 7oz. Phil next to me had 2lb and my carp was 9lb 9oz and my silvers were 1lb 11oz. My 11lb 4oz was 3rd in the 8 peg section, it was tough! Paddy took the section by default with 18lb which included a 12lb carp.

As was predicted at the start Campbell bottom bank was the place to be, with Jamie Bowden winning the match with 109lb 11oz. On peg 132 the second weight was recorded at 91lb 7oz, not sure of the name. Winning the silvers with a great performance of waggler fishing was Matt Parsons, he had 28lb 3oz of tench and skimmers on corn.

I ended up 16th out of the 30, and picked up a nice big box of Becks beer. Whilst waiting for the prizes we were treated to home made mince pies and a can of beer, nice touch that.

Well that's it for me, not sure when I will be wetting a line next now, looking forward to finishing work this Friday and having a relaxing Christmas. Wishing everyone a happy Christmas, enjoy yourself and hope Santa brings you what you want ;-) 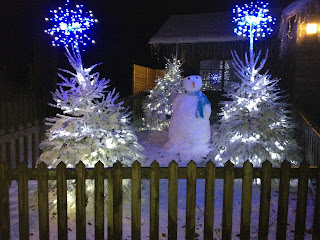