Contrary to popular belief I am still alive and well, lol, I had a nice break at Xmas and in the end wasn't able to get out fishing. I did walk up the crane one day to watch the last 90 mins of the King Billy Xmas match organised by Jerry Pocock. Warren Bates won that one with a great 18lb of roach, chub and a skimmer on stick and waggler. Martyn Reyat dragged his ass of the commercials for a day and caught nearly 10lb on a crowquill, plenty of bites for most anglers.

This weekend I was back in the saddle for Thatchers A for the commercial house, it was on the K&A canal from Bath Town to past Bathampton Bend. I was in a positive mood after watching Rovers win 5-0 yesterday, but was expecting the fish to be shaoled up after the cold weather. A good draw today like any venue in winter was required, so end peg or gap would be good, as well as a peg in A section int he town. Nobody in the team wanted to draw (well we are in relegation zone) so I stepped forward and said I would do it. Peg 1 or 9 would do, but I pulled out 4, I also managed to avoid drawing A section for myself, Tom Moretti was there in the long pond. Nathaniel was at Richardsons another good area, Dave Self just on the natural bank at Darlington (good peg), Colin Dance was past the wooden bridge, I was just past the flag pole at the George end (which has been dire), and Nige Evans just before the wires past Bathampton bend. On paper it was a good draw bar mine I had to hope for early skimmers on the bread.

Walking up to my peg Paul Elmes was on E1 but his peg was behind a boat so he had to move but he would be OK. On the flag pole was Maver's Sam Johnson a peg that can show skimmers but not much else. On the other side of me was Alan Jones, he was moaning about being next to me, we do draw next to each other a fair bit. Alan was just onto the brambles, then there was Kev Boltz, Mark Williams, Darren Gillman and lastly Tony Gilbert. I was not hopeful of doing well, and as I said skimmers would be important. My peg in the gloom and mist no brambles.... 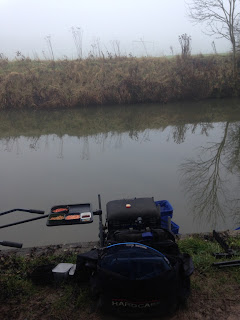 There was a large boat moored to my left (another to my right) and the owner of the large boat advised his toilet was full of shit and he needed to pump it out. To do this he had to move off and said he would be back by 11am, and that he would be reversing his way down the canal, oh shit indeed! I took this photo after he had moved off and left my peg a swirling mass of coco. 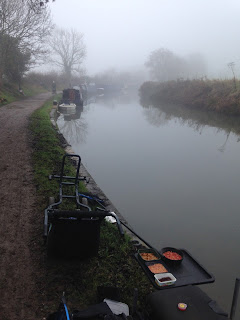 I guessed if he was coming back at 11 (an hour into the match) I would get my head down on the bread and not feed elsewhere to save it all being washed away at 11. This was my cunning plan.....

10am soon arrived, I gave it a positive apple ball of liquidized bread, put a 6mm punch on. 10 mins in and no bites, so put on a 4mm punch, 5 mins later and the float seemed to stop when it should be towing but did not go under, I struck and a lot of elastic came out. It was fighting well, I thought it was a big hybrid, but after a decent fight a roach of a pound was netted. Well well, don't get many of them on the canal. Another 10 mins past without a bite, then I had 3 roach in the next 10 mins. This was all I had on punch. Sam below had 2 gudgeon, it was looking poor for us. With the bread not working I had to feed some other bait, but was mindful of the boat coming back. I went with a small of joker in two spots and some worms.

At midday, 2 hours in, I had the grand total of 11 fish, it was dire. There was still no sign of the boat, so I went for a walk, Tony was winning the section with about 6lb of bread fish, but everyone above me was still getting bites on bread or whatever they put on the hook. I fed a bit heavier across with my joker as I couldn't wait for this boat anymore. All I had was a couple of small perch and tiny roach, and one 3oz perch over the worm line. Just before 1pm the boat returned, I could see he was really churning up Kev's peg and then Alan's, but when he got to me he seemed to drift in and made no disturbance what so ever (see video) and so my plan was completely wrong lol!  Not long after the coal boat came through...


It was obvious I was miles behind the leaders of the section, and I was probably beating Alan, Sam and Lee Warden below Sam. I fed heavier with joker and also fed a fair bit over my original bread line which was lifeless. Going across on double bloodworm I had a bite quite soon, and the elastic was out again. It turned out to be a roach of 12oz. A couple of more 2oz roach and then nothing. At this point Sam put the knife in, he dropped back on his bread line with bloodworm on the hook and had 3 skimmers. My "old" bread line in the last 90 mins gave up a gudgeon and a perch. Going back across I had another elastic stretcher, but after dodging a jogger shipping back the fish came off, bit of slime on the line too......  A 4oz skimmer next chuck, but after this no more better fish. The caster line was useless, but the joker swim was now full of small roach and I caught a lot on single bloodworm and even some on pinkie. As I said to Sam they were all to little to late.

The scales came from Tony where he was leading with 8lb 4oz, just behind was Kev who had 8lb 1oz then Darren with 5lb 15oz. My fish weighed 4lb 1oz which beat Alan and also Mark who had 4lb "ouch". Sam weighed 5lb 6oz and reckon he had 4lb in the last 2 hours. Paul Elms on the end peg had 7lb of roach.  I ended beating just 3 people in the section of 9 and only getting 2 points in the A div. I wasn't really surprised by this, and I needed those bonus skimmers.

Well despite the fish feeling bloody cold, and the water being cold the temperature must have risen a bit as the canal fished well in lots of places.

Tom Moretti won with 20lb of skimmers from the long pond
2nd Rob Randall from past the wires at Bathampton had 18lb of skimmers (I heard he had 10 in the first 10 chucks.)
3rd Mick Nowicki 15lb from next to Tony Gilbert (he had 7 skimmers in the first 7 chucks)

There were at least another 6 or 7 double figure weights, and in total 34 weights over 5lb. Not bad then. Thatchers A won the A div today (must have been my drawing arm lol) and so we have dragged ourselves just out of the relegation zone. Thatchers B are winning the league, Final round is in 2 weeks time, and I think other parts of the canal are being pegged. I'm not fishing again next weekend, so no blog.

Wanted to say well done to Edward Wiltshire for beating his chub PB, hope you beat again before the season ends. Here is a picture of young Tom with his winning catch, not long after he bought a round, good lad! 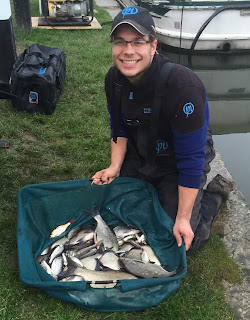