Last match of the series and one the Thatchers team was in top spot the other was hovering above the relegation places, I was in the lower placed side, lol. I spent a couple of hours Saturday morning making / replacing some rigs and tying some new hook lengths. Not long after I had a call from Martin Barrett telling me my side were two short, and that was with Stretch in as a sub. Well that was no good and I was a bit cheesed off, luckily I was up the pub for a few ciders with Mike Nicholls, Geoff Francis and Bath supremo Chris Ollis. We had a good chat and a laugh and Olly gave me a lift back in his red mean machine which is closer to being in the scrap yard than passing another MOT PMSL!

Sunday morning and though there was no frost on the car it was still very cold and everything that was frozen the day before was still frozen, it would be worse out in the sticks. When I got to the rugby club I found out we still had just 4 anglers in the team, myself Tom Morreti, Nigel Evans and Stretch. However, Stretch had fished for another team in the league so his points would not count, that meant as a team we would be starting with 3 blanks, relegation most likely then.

Young Tom asked me to do the draw but both end pegs had gone when I pulled out peg 5. Tom was at Meadow Farm, Nigel up past the George, Stretch by the swingbridge and for my sins I was at bast*rd Claverton. Why oh why this was pegged I don't know as it always crap in winter... I drove to the canal with Shane Caswell following me, at times it was like Wacky Races. I had little hope for a days fishing today, especially with two end pegs, by the bridge on 9 was Alan Jones and on the far end Andy Britt who was in a bay. At my peg I had On my left was Paul Elmes, and on my right Dean Harvey. The pegs had getting on for 50 metres between them, except Paul and myself who were pegged either end of a boat moored opposite. Initially I thought that it would be a good thing, a feature and maybe a bit warmer for the fish. The canal was very cold, ice on both banks but clear elsewhere. The canal though was covered with grass and brambles from a recent strim, meaning getting a bait in clean would be fun. All looking good so far then!  Not long after putting my box in place the owner of the boat appears on deck, he explained he was starting his engine to charge his battery. He kindly told me he thought I would do well as he chucks his food left overs in the canal at this end of the boat.... "Last night was left overs from steak & chips",  Well I had neither of those with me to try on the hook. He was though a thoroughly decent chap as were his two kids... As you can see it was very cold. 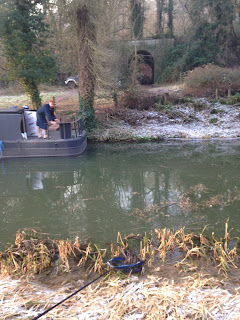 Rigs today were usual bread rig for 5m, a 4x12 Silvers for bloodworm which I could use by the boat and by the reeds to my right. A worm rig was also put up as I thought chopped worm might sneak a perch or two. Before the match started a boat came through, but it doesn't affect the canal too much here as there is not lots of silt. Onto the bread, nothing, not a bite. Early try over the joker fed swims, not a bite. Nicola Goodhind walks down and tells me it is rubbish with more blanks than catchers, when she walked back past me after about 90 mins only one person had caught in the section. I had to put up with the young lad on the boat keep coming out and looking at my float next to the boat, then he played football in the field using a gate as the goal. Later his sister enjoyed watching my float as she hand her brother chatted on the end of the boat.

Just before midday Paul next to me had his first bite, it came on the bread line, he had 6 little roach very quickly and that was it. I went for a walk, at this stage there were 4 blanks out of 9. I decided I was going to pack up at 12:30. The boat family left for a walk and whilst  I was trying one of my 5 fed joker spots I saw Paul catch a little perch over by the front of the boat. I went over to the back end and tried one of my lines by the boat, I looked up at Paul and saw him catch another although he did not see the bite, I looked back and couldn't see my float and struck. Flip me, a little perch, it stayed on and I swung it in. I tried for another 20 mins but it was a one off, then I had a call and nothing serious but I decided that was enough and I packed up. Dean Harvey below me also had 1 perch and said he was going to pack up too. I left my net in with the little perch. I really hope that this stretch is not pegged again next year, it simply should be off limits in the winter.

Sad end to what has been probably my most frustrating CH league for a long time, drawing some real dross and messing up on the first match. Not that I am complaining, you can't win them all and I had plenty of laughs along the way, well done to all those anglers who did well. .  As I did not go back to the results I do not know who won today, but I do know that it was a struggle for most. I found out that Thatchers B won on the day and so won the league, my lot finished the league in joint bottom position, we have though avoided relegation by virtue of a better weight! Well I didn't contribute much too that either really lol!

There is no chance of me fishing the canal again next week, although it is the Bob Warden Memorial so I will chuck in a fiver, but I'll not fish it. I will wait and see what the weather brings before deciding what to do, might be a few hours on the river depends.
Posted by Tim Ford at 17:42