Two weekends without fishing passed quite quickly, I had enjoyed some quality time with the family and even managed to get some sunburn by the sea.

This final round was a bit tense for my team, were in second place in the league just a few points ahead of Lobby's, and desperate to hang onto second place, winning was not possible as DGL had pissed it already. Saturday morning I spent preparing and checking I had everything ready, Saturday afternoon was spent with Glenn and Mike in the pub whilst keeping up with the Gas score.

It was a nice start to the day on Sunday weather wise although rain was forecast later. I decided to try the breakfast at the Riverside where the draw was, it was a help yourself affair today and so I had my fivers worth, and it was not bad I thought. Team member began arriving, some looking very tired after their exploits the day before on the National where Thatchers came 20th out of 49. It was decided that I should do the team draw, well that was not much of a change, and also it was no change when I drew the same peg the team had last week! They came 2nd off it last week, but there were some tough pegs I thought and no real fliers, at least given the conditions. I had put myself on peg 84, and that is an area that I would always say is useless, but last week that area fished well so I was happy enough.

I got to the rugby club and parked up and was soon on pushing my trolley up the path, I passed some nice pegs that I would have fancied, and some I would not. Lance Tucker was on 88 and his peg had won the section the week before ( a surprise to me as again I think its crap) then I guessed / worked out where 84 was, with the next peg number being 79 above me I had a lot of room. As you can see my view from the top of the bank, from where I had to fish, there was a nice willow tree right next to me on the left which I hoped would hold some fish. 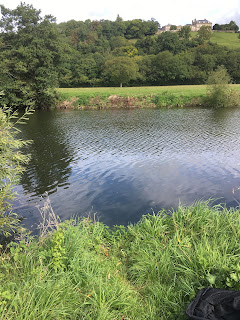 The match began at midday and I threw in 10 balls of gbait containing casters, hemp and pinkie. Picked up the 2g rig and tried a caster, first fish was an ounce at most, after a few minutes I had managed two similar ones and the float would not go under, not a good sign. Picked up the light rig with a caster and nothing, on with a maggot and bites began and I was catching the odd tiny roach and perch. I was gutted by the size of the fish, but there is not a lot you can do when you ball it as I firmly believe you catch what is there. After an hour bites reduced and it was time to try the worm line close to the tree, nothing, one missed bite and no second chance lol.

I gave the waggler a quick 15 mins for 1 bleak, hmmm where are all the chublets? Back on the pole and I could get the odd bite but was missing a lot, I thought I knew why, and when I put a pinkie on the hook I knew I was right, roach and pommies less than an ounce. Unfortunately I couldn't make bites on anything else so caught as many as I could, but even then presentation had to be worked at and varied to get these little blighters to take the pinkie.

I tried the worm several times and only had one 4oz perch, the waggler produced two roach, but they were at least 2oz! With an hour to go it started to rain and was quite heavy, I fed the pole line heavy with casters and hemp, hoping to get a decent roach or chub, sadly none appeared and I was left feeling the peg had been devoid of any quality, I had 104 fish but couldn't see them going much more than 6lb. As I turned round to pack up I was greeted by a host of slugs everywhere lol.

Lance below me had struggled, and Ian Stainer above me said he had too. However, as we went to weigh the lads in below us it was evident those pegs had all faired better. Winner of the section was Kev Abigail on peg 97 (this peg was last in section last week) he had 12lb 2oz and he had caught some big roach and a bream on the pole in the first 2 hours, one of the roach was well over a pound and a half. Here is the man and his bag of fish, well done Kev. 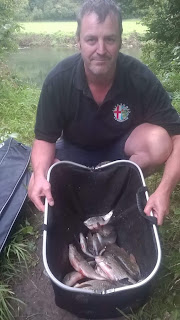 Above Kev, Dave Micklewright had just under 9lb of quality roach and chublets, and then on peg 90 Andy Jane had 10lb 12oz of roach. Lance managed 4lb+ for last in section, and then my fish went 6lb 3oz, and I only beat Lance as Ian had 6lb 9oz which included three large eels. A disaster for me and I hoped the rest of the team had done better. Here is my net of sprats, slightly smaller stamp than what Kev had PMSL... 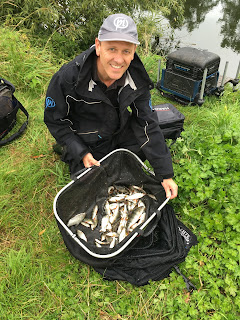 Back at the results and Mr Harper was no best pleased when I told him I only had 2 points as he was convinced Lobbys would beat us. However, he was wrong and the team had come second on the day and claimed second place overall. DGL won again to ram home their dominance, with Neil Richards man of the league fishing five rounds and winning his section every match, and he won the match today with 19lb 9oz. Neil drew peg 138 but had to move to 140 due to a boat in his peg, and that also happened to Darren Gillman who was supposed to be end peg but had to move above anglers, all annoying and bad luck for Darren.

Kev Abigail was second, then came Dave Clapton with 11lb 14oz of skimmers from peg 26, Matt Challenger 11lb 4oz, And Jayne 10lb 14oz and Charlie Valender 10lb 11oz. Not bad weights but nowhere as good as recently, pike are more of a problem, and bream are not feeding at the moment.

I've got to fish Viaduct this weekend, I'm filling in for Mike Nicholls in the last round of the Tony Rixon float only league. That's handy as I have to go back soon for the all winners final, but then it will really be about getting my head on for winter leagues and other river matches.