Not fishing related but I managed to cycle to and from work a couple times last week, I have done this because my weekly football has stopped due to the all weather pitch being destroyed as it was part of the old Grange school. I'm 49 next month and keeping relatively fit is something I try to do, it helps prepare me for the river walks too lol.

Mike Nicholls had asked me to stand in for him this round, and I was happy to help out although he was not doing any good in the league it would help Tony keep the numbers up. Glenn arrived about 7:25 and we proceeded to squeeze the gear into the car, and I managed to drop my mobile phone and watched slip through the slit in the drain in the road. Luckily the drain was full of dirt and not water and we managed to lift up the iron and retrieve it, phew! On to Canards Well for a breakfast which I enjoyed, there were a few other lads in there and Martin and Joe McMahon blocked most of their cars in with their van.

Arrived at the fishery and plenty of time to unload the car, once again I was without a shuttle as it won't fit in the car. It was good to see Robin Guy who I have not see for quite a while, he was fishing an open on Lodge. It wasn't long before we were queueing for the draw and I was fairly in the queue and soon into the coffee tin, I was disappointed to see peg 94 on Carey as I felt a draw on Campbell was required for framing. It is not a peg I have drawn before, but Glenn has three times and said he didn't like it. Glenn zoomed off to 115 on Campbell leaving me to stagger to my peg with my gear, though thanks to Bela and his young travelling partner Joe who also took some kit for me and I got there in one journey. The pegging was tight today but I had a bit of room as I have a corner to fish to, but it would probably be all or nothing depending if the carp were in the area or not. I though my section went to my left, where Dave Evans (I think I got the right one) was on 95. Mr Rixon was on 96 and Dan White on 97. However, my section went from Dave round to 86, where Craig Edmunds was sat, bugger.

It was going to be a hot and sunny day, and as you can see from the picture flat calm, opposite on 90 was Glenn Calvert, and young Joe was next to him on 88. 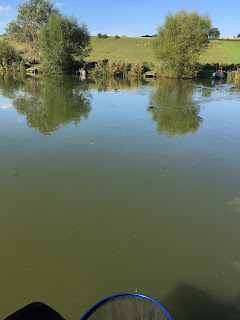 I decided I wasn't going to take on the 16m shallow anglers at there game, plus my arms won't take it as my tendons are still painful. I set up a paste rig for 5m and one for 13m, a shallow waggler for casting around the peg and over to the pallet on the end bank. I set up a mugging rig and a 4x12 rig for fishing hard pellet at 14m to might in the margin. It was very deep in the margin, 3 foot but I could not get in tight as there were lots of over hanging branches etc, but I thought with it being shady it could be good. See picture of the margin. 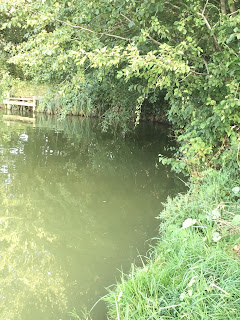 When the all in was shouted I fed my two paste lines and fed a few 8mm pellets in the margin and to the end bank for the wag. I dropped in at 5m with the paste looking for a mug fish, but there was no fizz and no sign and then I saw a carp so went out with mugging rig. I didn't get the carp I saw, but another came into view and I nailed this one, a nice start and 8lb in the net. I couldn't see any other carp after this and then noticed the 13m line was fizzing, so out with the paste rig. The rig sat motionless for 5 mins whilst there was a bit fizz going on, then a proper bite and carp on. It was a another mirror of around 7lb this time. Next drop and another wait then another carp hooked, but this one came off after a minute, it didn't feel fouled. A skimmer and then a wait and another carp hooked and it felt a good un.... But we shall never know as my elastic snapped, bad angling there as it was obviously weak but I did not check it. Sadly that was the end of my paste line for carp, never saw or hooked another carp here all day.

Next plan was to try the waggler, and I gave this 30 minutes, casting to the platform and to the open water. I had one bite next to the platform which I missed and that was it. I tried the paste, the margin and the waggler but all were rubbish, I had some skimmers on the paste line and that was it. With 2 hours to go and only two carp in the net things were not good and Trig was easily winning our section. I went into the margin again with an 8mm pellet, and I had an indication as soon as the rig was in position, and soon after had another bite and hooked a carp, got this one out without too much trouble as was only about 6lb. It was difficult to feed the swim due to all the branches and I had to lean out to feed with a catty, I did put a toss pot on too to try to get a few pellets close to the hook bait. Anyway next drop in and another carp on and this one was probably 10lb, a lovely looking fat common. I took another two carp in as many drops and all of a sudden I was thinking if this carries on I might be able to get a ton. Of course it slowed right down, and when I had a tench and a skimmer it was plain to see the carp were gone.

I tried all the other lines to rest the margin, but nothing was doing, so I decided to stick it out in the margin. I did manage two or three more carp, another tench, a lovely 2lb hybrid and a skimmer. I also managed to pull out 4 branches and carious twigs. I also pulled out of 3 carp, which I was sure had now come off bottom and were probably fouled. The last one swam out of the corner, and then despite my best effort swam back into the corner. It got round some snags but was still on, I managed to get it free and then it came off and a twig was attached to the hook instead. That was literally just before the all out and the rig was resembling a pigs tail and it was match over.

When the scales came up I saw that Tony had 75lb and Dave 28lb, my turn next, and my silvers went just under 15lb and my carp 69lb, so 84lb+. That was top in the section until Trig weighed in 140lb+ so no coin for me today.

Shawn Kitteridge won the silvers with about 34lb from peg 119.

Congratulations to Craig Edmunds for winning the league for the third year on the trot, and bad luck to Tom Magnall who came 2nd having 6 section wins but missing out on weight.

Full results are on Tony's blog.

A tough but enjoyable day, and Glenn managed to win his section on Campbell. Not sure what I am doing next Sunday, might be on the Thames.
Posted by Tim Ford at 21:37