Another busy week (so what I hear you say) but I give my gear a good going over Friday night and Saturday (between watching the Gas lose again) to  get it right for the canal. I feel like I have come down with another cold and have a cold sore, and just felt run down since Friday.

The draw was back at the Crown Pub in Keynsham, and I was a little late arriving having some issues where the toilet was concerned. Still I had time for a breakfast and said goodbye to the landlady who was off to another job she said. The first match on the canal at Bath is usually a good one as the fish have not been caught for a long time, the match was pegged from Meadow Farm out to just past the swing bridge at Bathampton. The town stretch was not pegged as ponds there are empty due to some work going on. However, if anyone is looking for a good day on the canal I suggest go to the Malthouse as I heard the fish from below were moved into there!

Draw done and I was off to Meadow Farm, not on the flyers either side of the bridge sadly but up towards the old lock. I managed to find a parking space very near to Meadow Farm lane, and was soon walking down the lane to the canal. Rich Lacey walked along with me and he was on the next peg and we struck a pound side bet up. By the bridge the canal was alive with fish and I couldn't believe the fish that were topping and blowing all on this side of the canal.

Got to my peg and it was just past where the little stream comes in, Vic Abbot was on that peg. It kind of looks the same through here, and the canal is a good depth with nearly 5ft down the middle and at least 3 feet over. Although it looks like there is a lot of cover over all of this is growing up just back from the concrete wall, so the features are above the water if you get what I mean. 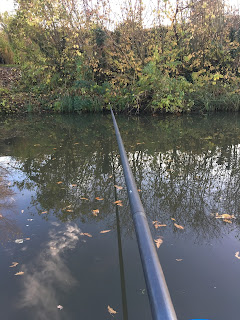 Ready on time today, and I called the all in, I potted in a ball of bread at 4m, and some joker on my two bloodworm lines, I also fed some casters across by catty.  I picked up the bagging bread rig and dropped it in with a big piece of punch, straight under, small roach, same next drop in, same next drop in, then a 4oz roach. I was getting a bite as soon as the float was settling, I couldn't really catch any quicker, but the fish were less than an ounce and other than that 4oz roach I was slightly disappointed at the size of roach. I was of course hoping for a skimmer or two, but they never showed, and I was kept busy catching small roach. After about 30 mins I switched to the lighter bread rig as I had been missing a few bites, and by fishing off the bottom I carried on catching small roach. Eventually of course this line came to a grinding halt, but I was happy enough, and felt I was doing as well as anyone else, although Rich told me he had a couple of skimmers and a decent roach but not much else.

I went across to look for an early caster fish, but I never had a bite, so onto the bloodworm where I would carry on catching roach I thought, ummm no! I caught one see through perch and that was it, I could not get a bite, I was shocked. Eventually I had enough and went for a walk, and when I came back and sat down down wondering what to try next I went with the bloodworm right over. Well the float buried and I had a roach on it, then I had another, and another 6 or 7 before it went dead again. Strange since I had not fed it again or done anything different.

The last two hours I managed to pick off odd roach and ruffe from my bloodworm lines, I did get two little hybrids on my caster line but on a maggot hook bait, sadly the chopped worm line never gave me a single bite. Lots of bites but I knew I didn't have enough to win any money today, and Rich gave me a lesson winning the section with 8lb 8oz, take away his three bonus fish and he probably had similar to my weight of 5lb 6oz, but that's fishing and I paid over my £1. Walking back we had to face the long walk up the lane, it is a steep lane, which gets steeper towards the end. I started walking up with Rich and Nathaniel Johnson, and I was determined to get to the top without stopping. I did manage this and celebrated like Rocky did in his first film, Rich got it and shouted "Adrienne!!" Lol I said I should have had a £1 with them on that.

Back at the pub and more lovely roast potatoes and a couple of pints before the results were read out.

Rich Whitmarsh was the top individual over the series.

On the day Bathampton won, Sensas were 2nd and Thatchers 3rd.

Overall Thatchers and Bathampton tied on points, but with 4 match wins to two Thatchers won the league.

Well done to everyone who took part, well done to Mark Harper for running the league. The fishing was as ever good overall and I enjoyed it immensely, and I enjoyed the banter back at the pub.

Next week it is the 4th round of the Commercial House and that is at Newbridge which will be the last match on the river for a long while.
Posted by Tim Ford at 20:21