I am going to have to pad this blog out a bit, hope that doesn't deter you or give to much away. Early part of the week I was working in Munich, can't beat a Weiss beer in Bavaria. Work was full on from there on in...

Wednesday night I was playing football and at 49 you might say I'm too old, but with lads from 20 to 60 playing in this I felt middle aged. I scored two goals so happy with that, but mostly happy running around keeping fit. It absolutely pissed down after we played and when I woke up Thursday and saw the puddles I knew the river would be up. However, with no more rain the river would drop before the match.

I decided Saturday to get some more exercise and I walked to see the river at the Crane, it was well coloured but not that pacey. I got home and had walked nearly 10km and would look forward to having a nice glass of Amarone wine later. 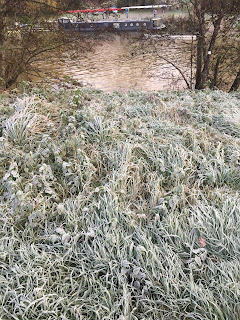 Nice breakfast at the Crown pub again, time for the draw and I was asked to draw for my lot, we were way down the list as we had two stand ins who were coming late. I wasn't overly impressed by the draw I got for the team if I'm honest, but fingers crossed we'd be alright. I was heading to peg 26 which was not on my list of go to pegs.

Got to my peg and my first thought was I'm going to get beat up, I'll explain. My section started on peg 22 and I hoped I'd beat Rich Whitmarsh on that peg, Andy Britt on 22A I should beat, Man of the moment Mat Challenger on 24 I thought might get some chub and he could beat me. From 28 to 36 I thought all had a chance of bream and could beat me. I wasn't being negative, just realistic, and I considered that I had to catch a couple of chub and a lucky bream to do well. Setting up was a easy, a gbait feeder with 16 PR355 to 0.14, and half heartedly a 3g pole rig and 4gm flat float.  The picture shows my minimal set up and the colour of the river. 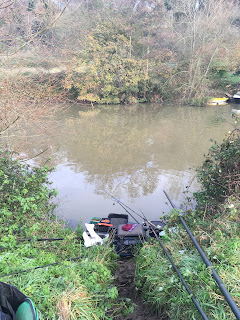 Start of the match and I threw 8 balls of gbait at 13m, I wasn't sure this was going to be any good but I thought there might be a few skimmers over it later. A quick 10 mins here on the pole was fruitless so I picked up the feeder. I threw this nearly 3/4 way over into the flow and slightly upstream. Reason for this was the flow was here and I though I might nick a chub or two on this line. First chuck and a tremble, I reeled in a 1/2 oz roach, next chuck a better bite but I did not connect. Then a long wait with no bites, I was trying different hook baits, and at 10:50 with 3 casters on I had a good pull round and struck into a good fish. I was sure quite quickly it was a chub, and when it came in close I gave it no quarter and up popped a reasonable chub.

I would like to wax lyrical about the rest of the match but I can't. The river had switched off and as I thought the frosts had chilled the water and the fish had gone into temporary suspension. I expected to get some more bites but it never happened, and my match was over, I did go up 5 levels on candy crush though lol!  Man of the moment Mat soon realised that drawing next to me was not a good idea and he came last in the section with a 1oz perch. Sorry Mat!

I did have a walk mid match and Dave Lewis on peg 34 was winning the section with an estimated 4lb. When the match ended I had to weigh in, and Dave did win the section with 4lb 14oz, other than 1 perch Dave caught everything in the first 40 mins. Mark Bromsgrove did really well on the peg above me to catch 3lb+  for 2nd in the section, and  Martin Barrett was 3rd in section with 2lb 12oz beating Jerry Pocock by 1oz! My chub and tint roach scraped a level 2lb, and much like last week I was beaten by four and I beat four.  Middle for diddle and thanks Dave Lewis for the photo. 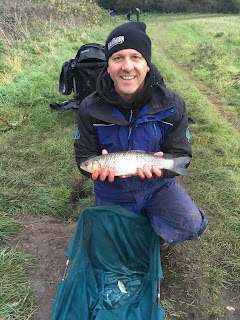 I think the top anglers were...

Thatchers B pissed it today, and DW builders were second despite being 1 short, well done lads! John Rowlands fishes for DW and he was struggling, but with 6 mins left on a tiny feeder and 22 to 0.08 he hooked and landed a 4lb bream to win his section, so well done John!

Well that was pants, back on the canal next week and hope I draw a flyer.
Posted by Tim Ford at 20:37