After last week's poor match on the river I was looking forward to this match on the canal and a few more bites! I ended up getting all the orders for bloodworm and joker and was indebted to Ian Pauley who on Saturday morning drove to Derby and back to my house with 15 packs of the highest quality bait I have seen wrapped up in Polish newspaper. 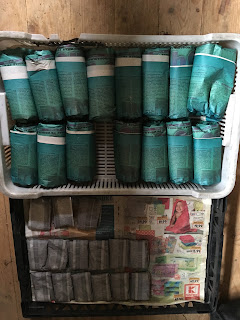 I did not have much prep to do as my rigs from the last match were intact as were my hook lengths. That meant I was able to get down to watch the Rovers, thanks to Glenn for the lift, and finally we saw them win after a terrible run. The red team are doing rather well and I have to say that since I know many of the lads I fish were are teds, lol. I did sort my bread out on Saturday, not too hard a day then. 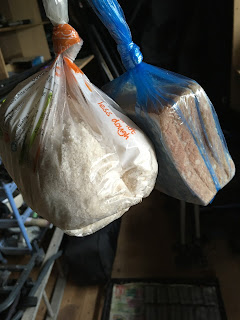 I got to the Crown pub in Keynsham for the draw and had a lovely breakfast (even had a few chips on it) and was soon collecting the money for the B+J and it all worked out just right, no money made I just sold it for what it was as I'm not a tackle shop and was just helping out. The canal had been pegged at the Malthouse and Richardsons for the first time this winter, and I really thought these would produce the top weights, there were also pegs either side of Meadow Farm bridge which have been great and then outside the George, so pegs 1 to about 17 for me, and not 18 to 26 as I expected those to produce just lots of small fish.  The draw got underway and Richard Chave was called upon to draw for the organisers, bloody hell he drew Vincent Lunn and Mike Goodhind in Malthouse and Andy Britt at Richardsons, Rich then put himself on the Meadow Farm bridge! I was not that happy when I pulled out 24, this was on the brambles up past the George, an OK area but I just did not see it competing today.

When I got to the canal I found out Andrew Cranston was on the peg outside the George, he had this peg last match out and came 3rd, this kid can draw! James Carty was in the bay and Glenn Bailey on the white post, both pegs can be good. There was a gap after this and then five of us were all in a row on the brambles, Paul Elms, Shaun Townsend, me, Tony Gilbert and then Martin Barrett on the end peg of the match. I was happy enough but thought I might struggle to beat the end pegs and Tony and Shaun are good canal anglers so it was certainly a challenge. Picture below of my peg as I was setting up, the canal was covered in leaves which were a pain all day. 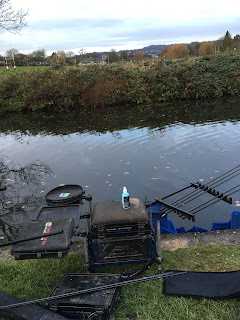 I set up the usual rigs for bread punch, bloodworm, caster and worms and would see how things went as to where I put my main attacks. When the match began I fed liquidized bread at 5m, some joker at 10m up to my left and across at 13m, I also fed a very small amount of chopped worm mixed with joker and bloodworm off to my right by the brambles. I dropped in over the liquidized bread with a decent size punch, 5 mins nothing, down a size punch, 5 mins nothing, down a size punch agin and 10 mins and nothing! By now the five of us up here were all asking who had caught, none of us had and this was a very bad sign indeed. After 30 mins I gave up and picked up my blooworm rig for across, the float settled and went under, I missed it, then the same but I hooked a little perch. Think I was the first one to catch. I had 2 roach and 2 more small perch on this line and then it died, oh dear.

After an hour everyone had had a fish bar Paul, and I decided to go over the chopped worm line with an inch of dendra. It wasn't a long wait for an indication and I had a 1/2 oz perch, back out and a bit of a wait and a positive bite, 1, 2, 3 strike. A bit of elastic came out and as I shipped back I saw a perch of about 4oz, then it came off grrrr, the worm had doubled over the hook. Back out again and Glenn rang me, it was shit for him too, I had another bite and hooked a perch again, shipped back to the top set and as I grabbed the landing net a 4oz perch fell off the hook, FFS. I was sure that would cost me, and of course getting another bite on the worm was now not likely.

The match was a struggle for everyone in my section, and soon Tony was packing up and going home. Shaun then had a 10oz perch which as he landed it he said would be the section winner! I tried everything, as did everyone, I stuck with worm more than bloodworm as I knew I needed a decent fish, and if the float ain't going under with bloodworm it's not worth sitting waiting for a tiny fish. I caught another roach, and a few more perch and ruffe, but all were small and come the end of the match I thought I had 8oz. It had been really tough.

My section was the worst, so I am drawing pants at the moment lol. Martin had 7oz, I had 11oz, Shaun 1lb 5oz, and Paul 9oz. Shite and the two lost perch hadn't really cost me it seemed.

Back at the results and I was happy when Chris Ollis bought me a pint in return for the B&J he picked up after, cheers Chris. The canal had been tough for most people and the cold water had certainly killed it.

Weights dropped off quick after this, with I think Shaun coming 11th with 1lb 5oz, and so I managed 10 cans of cider for my effort. The raffle was a strange affair, Andy Curry winning about 6 prizes and of course the Britt / Goodhind clan clearing up lol. I did manage to win a bottle of Pino Grigio and so I would at least be in the good books with my wife.

Well I was taken aback with how hard it fished today, not seen it fish like that for a long time, guess it will come right again once the fish get used to the cold water, but as it seems winter is here the fishing will be hard now unless you are luck enough to draw on a tight shoal of fish, feast or famine time.
Posted by Tim Ford at 20:15