I've not been fishing for a couple of weeks and this was planned due to a number of "social" engagements which would take precedence; hospitality at the Gas which once again ended late in the Essex and was quite simply a fantastic day out with friends and family. Then this week I got to watch the world darts at the Ally Pally, took my daughter along and we both were really pleased we went it was a great experience. Sadly I went down with a bit of man flu and am still trying to get rid of it today.

The min reason for this blog is that I have been asked many times how many times I have won the Poppy Match and framed etc, and this year when at the match I saw Brian Lloyd and he said he had the original Poppy Cup and he could let me have it to borrow. It was nice to see it again. 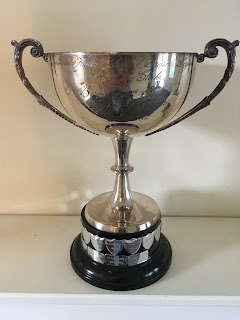 This cup was used from 1981 until 2005 and so I am going to list the winner of the competition and how I did each year, although in the early years I was not match fishing / don't have a record of how I did. I have vivid memories of Brian calling out dozens of raffle ticket numbers and gradually losing his voice as he did so. Brian also had regular message he shouted out at the results "no one has ever won this match twice"....

1989 Tony Rixon  - I was drawn two pegs above the New Fence up the Crane. I had 12lb which consisted of 3 chub, 2 hybrids and 5lb of decent roach on a feeder. I came 3rd overall

1991 M Shepperd  -  I drew the last peg in the first field at Swineford and had 12lb 4oz of chub and skimmers on the feeder to come 9th.

1997 Darren Brimble -  I had a poor day one below the cow drink at Chequers, and just less then 5lb of bits.

1998 Ian Pulsford  -  I believe this match was on the K&A canal and Ian won it from Limpley Stoke, I DNF

2000 Les Williams  -  Les was pegged near the bridge by the Bird in Hand at Saltford.  I was drawn one above the Danger Weir sign on Kelston Straight. The river was up and coloured and I had 1 bream, 1 roach and 16 eels for 9lb 10oz and came runner up.

2001 Tim Ford   -  I drew bang on the top of Chequers Straight and had one of my favourite day's fishing, catching 21lb 12oz of dace and roach on the stick float. I became the first person to win the Poppy twice, and I ruined Brian's "no one's won this twice " announcement lol.

2005 Mat Challenger  -  Mat is the last name on the original Cup. I drew the Steps at Jack Whites and the river was running off very fast and still coloured (angler below me didn't fish his peg due to this). I fished from the top of the bank and had 5 chub and a bream for 18lb and 4th overall.

2006 Dean Harvey  -  Dean was the first name on the new cup, and Brian Lloyd retired from running the match after nearly 25 years, Ray Bazeley and Paul Benson carried on the good work.  I drew peg 7 in the little field at Newbridge, 9lb 9oz won my section.

2007 Tim Ford  -  I drew peg 18 at Swineford and was sure I would catch chub and went all out on the waggler. In the first half I had 8lb of bits, then I had a run towards the end of the match of bream ending with 15. I weighed 61lb.  Third time winner

2008 Tim Ford  -  I was drawn on the first peg in the long ashtip field. The river was up and coloured and only feeder fishable. I had 4 bream, 4 skimmers and a few bits for 22lb 2oz. Fourth time winner

2009 Dave Stiff - I was at Rotork and chucked back 3 perch which, had I weighed them, I would have won my section lol.

2011 Paul Haines  -  I think Paul was on about peg 5 at Swineford and had bream. I struggled on peg 20 at Newbridge, giving up on the bream I caught late chub for 7lb 4oz and a section win.

2013 Jerry Pocock  -  Once again the river was flooded and I had no chance at the Crane, my 2lb 7oz won the section though.

2015 Jan Mazyk  -  I drew peg 77 a couple of pegs below Newton-St-Loe railway bridge. I had 5lb 7oz and lost the section by a couple of ounces after losing an eel out of my landing net. 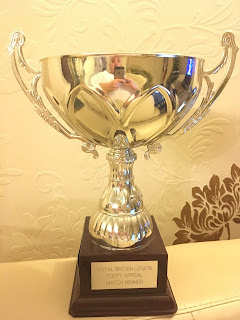 It has definitely been a lucky match for me, and I look forward to fishing it for many years to come and help to raise funds for the Poppy Appeal.