I had little chance of fishing over the Xmas holiday due to many family activities and also watching the Gas play three times. The weather has not been great and that has helped keep me from itching to be out on the bank as it were. However, I did get a few hours spare on Xmas Eve and it was a question of where to go in the hope of a few on the river, In the end I plumped for the Straight at Saltford which is free fishing and you can park behind your peg.

When I arrived at the river the wind was blowing hard downstream and worse the nearer you went to the Jolly Sailor, and for that reason I went for a upstream peg which is just below the old Kelston Point peg opposite. I had not fished here before so had no knowledge but having seen two cormorants in the area surface with roach I thought there might be a few fish here (I did manage to scare the birds away straight away). Picture below shows me looking downstream, the river had a nice flow but a bit of a funny colour. 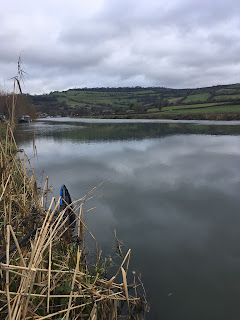 I plumbed up with the float and I was surprised to find the river shallow at 5m out and just getting gradually deeper until about short of halfway I had about 16 feet of water. Had I have set up a pole I may have plumbed more accurately / realised the bottom was worse than I thought.

I threw 3 balls of gbait containing hemp and caster out and well downstream and cast the float out, the first few runs down produced nothing and I deepened off a bit. I caught an ounce roach soon after doing this, and then a four ouncer, but then my troubles began. The wind got worse and affected me with it blowing into my bank. My mending the line of course would bring the float in a little closer to me and I started snagging up, in fact I soon came to the conclusion that a large tree or similar was in front of me. I caught a couple more roach but had to give it up as a bad job and I picked the feeder rod up.

I cast where I had taken bites on the float and I did not catch the snag, but had no bites at all. New line then, I cast right in front of me just past halfway which was well away from the other line. In the first four casts I had bites from roach, then it went dead again. A very tame robin kept me entertained during the dull moments, and I looked up once to see my tip dropped back, it was a chub of about a pound.

The feeder line went right off, and I tried the float again with no luck. I decided (as I had a lot of bait left) to throw 6 balls in and see if this would work. I had one bite and it was a chub of about 1 1/2lb.

Soon after my wife rang to say she was off to the Jolly Sailor with my two daughters, but not the one by me the one at Hanham! I fed the rest of my bait to a couple of swans and left plenty for the Robin. As I packed up an old couple walked past and asked if I caught any fish, so I showed them and they took a snap for me. Not a great deal but better than a blank. 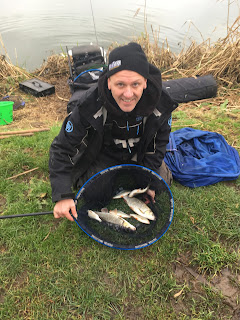 I got home, showered, changed and was on a bus within an hour and joined my family for a quick couple of drinks. 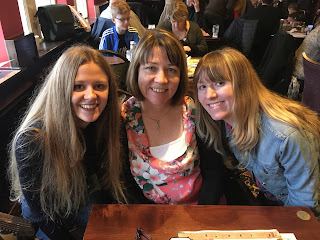 The snow, wind and rain have kept me off the bank since and I have been happy to read blogs and tales on Facebook, my next outing will be on the canal at Bath for the 5th round of the Commercial House 7th January. I have also been picked (last choice I think lol) to fish for a Thatchers team in the Viaduct Winter League. I have only stood in for people in this in the past, but decided to give it a go. I know it will be a bit of aquatic bingo but with it being a team match you have to do the best you can from the peg. I will be up against it and not expecting any great results, but fingers crossed I get drawn on a pile of carp one match PMSL.

All it remains for me to say to everyone is I hope you have a Happy New Year and that 2018 is a good one for you. I look upon 2017 with fond memories and many great days fishing as well as spending quality time with my family and friends too. Lots of laughs and lots of fun, and I hope 2018 will be too.
Posted by Tim Ford at 17:23