I was never planning on fishing this weekend as I was going to spend the weekend in Plymouth, my eldest daughter is at Uni there and we could see her and watch the Gas play. I'd been full of cold all week and so didn't feel great travelling down. Walking into the ground Saturday I was chatting and didn't see a football come flying my way, first I knew was when it caught me on my ear and jaw and nearly took my head off! Never did find out which Rovers striker hit, but my jaw is still aching. Of course we then lost the game (cheers Ref) and struggled to get out of the ground due to police keeping fans apart. Nearly managed to meet up with Andy Seery before the game, but the pub was simply far too packed. Drove home Sunday morning, through some nasty snow but I think I missed the worst of it so was lucky.

Back in June 1999 it was mostly about practising on the river Trent for the ATWL final. I read up as much as I could on how teams and individual winners had caught before. Bloodworm and Joker seemed to play a big part, not a strong point for our team, so we would be looking for feeder fish. The match was on the embankment, so in the centre of Nottingham, and as much as I was looking forward to practising I was looking forward to some good nights out too. First practice as a team was on Sunday 20th June. I went down the maggot feeder route to begin, and after 2 hours I was blanking having missed a bite and lost a fish. The only lads doing well were catching bream on the groundbait feeder, so after a walk I changed over to that. It saved the blank but I only had one roach. Ian Spriggs, Darren Gillman and Glenn Bailey all caught bream that day, so at least as a team we learnt something.

Thursday 24th June and I was off to a golf course near Dorking called Gatton Manor. One of my customers was having a golf and fishing day, with one of the lakes on the course being my home for the day. There were very few pegs available as the lakes were not normally fished, I found a spot in corner but would rather of been up the other end where large carp were cruising around. I struggled to catch for large parts of the day, but if I fed heavy I could get lots of fizzing but no indications. In the end I fished in the margin next to a little patch of lillies, I had 1 carp and 7 skimmers but lost 3 carp which snapped me.

Saturday and drove back up to the Trent, another practice for the team and this time I went straight down the gbait feeder route but also fed a pole line with gbait and joker. It was a very difficult day, and I ended up with just 2 hybrids on the feeder and 1 perch on the pole, although I did lose a better fish in the pole which snagged me. The river was fishing very poor and we all struggled.

Back up again for a weekend, and Saturday 3rd of July saw us fishing on pegs just below Trent Bridge. As a team we were being helped by a famous Trentman called Jim Meakin. Jim had been a friend of Frank Barlow and travelled with him a lot in the past, Frank nicknamed Jim "Butaine". I was fishing today with a little bit of fishmeal gbait mixed in and it did no harm as I had 8lb of skimmers and hybrids in 3 hours fishing. Everything was caught on the feeder with a 20 to 0.12 with single or double red maggot on the hook, then later I added some chopped worm and caught a few on bits of worm. It was a good session for me as I managed to make a few things work. The next day we fished an open match, the last chance to fish prior to the final. I was 12 pegs above Trent Bridge and as I was walking to my peg Jim asked if I could let him have some fishmeal gbait. I had a right struggle, the river coloured up badly and I scraped 2 perch and a skimmer, all that really fed were odd bream and skimmers, and Jim had a few and asked me to fetch him up some more fishmeal the following week.

We went out for a few beers and a curry, Jim invited us all to his club where there were many pool and snooker tables and cheap beer! We were sat talking and he said I think you will do well tomorrow Tim, I was taken aback, and then Mark Bailey said, yes I think you might win it! The beer was talking, but at the time I was amazed at what they said and I felt a bit pumped up.

The next morning there were a few lads with sore heads, we couldn't have looked that great when we arrived at the draw. The conditions could not have been worse for our team, we were well aware we needed to catch on the feeder but the river had gone clear and it was a bright sunny and hot day. I went to pay Billy Knot my individual bet, and it was then I realised I was skint! I'd spent all my money and had to borrow a few quid to get a bet on. The draw was done and off we went to our pegs dreaming and hoping of a special result.

As I began to set up it dawned on me that I was fishing in the area where we practiced on the first day, so I at least knew bream were in the area. All I set up was a gbait feeder and a pole. On the all in I balled in some bait on the pole line and then grabbed the feeder rod. The anglers around me all did the same and cast their feeders a very long way out. I cast out only about 35 metres where I would have that line all to myself and where the lads who caught bream in practice fished. Fifty minutes in and I had not had a bite, but neither had the lads around me, so I decided to start to add some chopped worm into the feeder and put an inch of worm on the 18 hook. Fifteen minutes later and a little rattle gave me a 2oz perch, phew not blanked. Then another little perch 10 mins later. Then I had an almighty bite, and I forgot the golden rule, don't strike. As I picked up the rod in haste I felt a knock and it was gone, snapped up. Damn, that was my chance gone, had to be a chub or barbel and the 0.12 stood no chance. Shortly after this to rub salt into the wounds the lad to my left landed a chub that was nearly 6lb! I was livid with myself.

I was desperate for a bite, a bit of luck, and as I had the 2 perch I saw no sense in trying the pole and kept on the feeder. Nick Lewis walked along with his camera and took a snap of me and said it was fishing really hard for all. 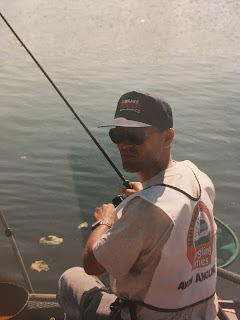 Not long after this I had a a lovely steady drop back bite, and as soon as I picked the rod up I knew I had a bream on. I think my heart rate went from 60 to 160 in about 2 seconds. As I played this fish back I was absolutely bricking it, my heart was exploding out of my cheat, never have I felt so much pressure. When eventually this bream surfaced a huge "wow" went up behind me, I glanced behind and about 150 people had assembled to watch, now I was really shitting myself! Thankfully the hook stuck and I landed a near 5lb bream to huge cheers and applause from the crowd, I think I may have shouted get in. I was so shocked I could hardly get bait back on the hook as my hands were shaking so much. A steward (who knew nothing about fishing) asked what I had caught, I said a bream about 4lb, " A preen?" he said, lol!  The team were soon to know what I had caught as the news of my fish was relayed via tannoy to all and sundry from the press tent, and of course that meant more visitors and interest. I tried my best to keep my concentration, and I did receive a lot of encouragement from Nick, Mark and Jim during the day.

I managed to land another bream later in the match, and pulled out of another when the worm had doubled over the hook. When the all out was called I'd had 6 bites in 5 hours, and that was a lot more than most. Talk was I was in with a chance of winning as the river was fishing really bad, and when the match finished photographers were staying close, and I got to talk to Mick Rouse a lot that day. It was all a bit of a blur if I am honest, packing up and waiting for the scales, then weighing in in front of a huge crowd, and the weight of 9lb 9oz being called out. I wanted to know how the rest of the section was doing but Mick said you've beat all of them and probably won the match and he took some photos for the Angling Times. Nick carried on taking snaps too. 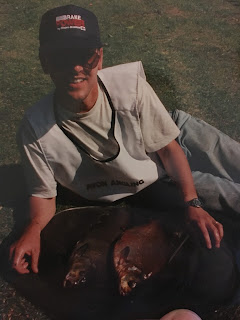 When I got back to the press area it was plain to see it had been a struggle for the lads, and we ended up 7th and got some money as a team. Dave Lewis lost a bream and blanked and that would have made a big difference, but such is life. I finally found out that I had won the match, and it was an amazing feeling, something I had always dreamed of, winning one of the very biggest events in match angling. I was heartily congratulated by the lads, and I think it gave them a buzz that we had the winner in our team. Jim Meakin and Mark Bailey's comments from the night before stuck in my mind, and they just simply said we knew you would win, weird!  Eventually it was presentation time and I was given a nice wad of cash by Billy Knott (over £500) and the trophies from the sponsor "weathercall". You can see Billy in the background of this photo, telling everyone I had a full bet and moaning about it, lol. 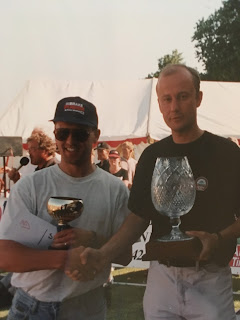 The drive back home that night was a sweet one, Darren was driving and we kept ourselves amused on the journey back. I said the TBI (Trent Bridge Inn) was a brilliant place to drink in, Darren later changing TBI to "Tims Bream Incident". I lived off the buzz of this match and congratulations from many anglers for weeks after.

Forgive me if I went into a lot of detail and bored you with this, but recalling this day still brings back special memories, not only of the win for myself, but of what was a great bunch of anglers and good mates I fished with, many of which I am happy to say are still good friends today.

Next week, the clocks go forward, British Summer Time begins, and weather permitting I will after a few weeks break be back on the bank! Tight lines.
Posted by Tim Ford at 17:27