First an update on my post on the ATWL final last week. One of the lads in the team, James Carty, had a feeling the results had been worked out incorrectly. With three teams tied for fourth place we had come 6th on weight, but the rules of the competition state in the event of a tie the team with most section winners, seconds etc are to be used. Martin Barrett mad an official objection to the result and a day later the Angling Trust came back and agreed and as a result Thatchers were promoted to 4th place and £800 as winnings. A shame the results were not done correctly, but at least the AT recognised the error and sorted it quickly.

This weekend the fishing has been curtailed thanks to the "beast from the east"! Steve Long had to cancel the last round of the Viaduct winter league as the snow was very bad and nobody would of been able to get in and out of the fishery. Of course today has been a beautiful day (at least in Bristol) and spring like, though I decided that attempting to fish anywhere was a bad idea as the water will be ice cold. The final round is now weekend, but that is bad news for me (and some other anglers I know) as I have other plans and cannot fish, a shame as I was doing well and had enjoyed the league. All to soon the river season will be over, and as is bloody typical I am sure it will be well fishable once the season ends, more on this later. Anyway picture below is one I'm sure shared by many people as the snow blanketed their garden, I managed to keep a number of birds alive with the food I put out, and a couple of apples cut in half attracted fieldfare for the first time ever. 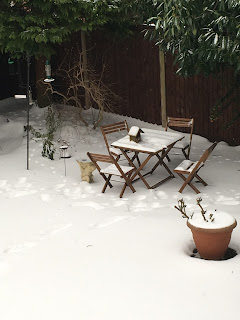 I went out Saturday to the Hollybush with Glenn Bailey and Mike Nicholls, it was nice to walk in the snow on the deserted cycle track. I had a lovely meal and more than a few beers, it took me a lot longer to walk home, and then as I was on my own had too much whiskey. Picture below of me part way though the delicious chicken pie. 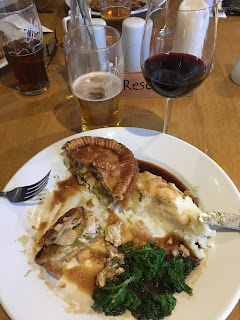 Back to March 1999 and on Sat 13th I fished a new lake at Hunstrete, I did not know it then but it was called bridge lake. I fished with punch bread on the pole to strt and had just three bites and three roach, but they were all 1lb+ I went onto the waggler with maggots and it was slow, but I had six more roach with the biggest being 1 1/2lb. Wish I had a camera back then.

A couple of weeks off then on Sunday 28th March half a dozen of my mates decided to go pleasure fishing. We went to the Sedges based on advice, but when we got there nobody fancied it and so we went off looking for another place. We ended up at a place called Langford Lakes which was near Lovelynch, I'd never seen it before, and I've never seen it again after this day. We were allowed to use keepnets so I think we all had a couple of quid on it. Everyone was on one bank but I had to traipse around the other side. It was well coloured and I decided to fish in closer in the shallower water a topset out left and right. I fed the two lines with caster and kept rotating as bites died on one line. I had a lovely day catching 20lb of roach and skimmers, plus three 1lb perch and five tench to 1 1/2lb. I think the rest of the lads struggled like hell.

Saturday 10th April and another new venue, Cuckoos rest, again just pleasure fishing. I think I went with Andy Floyd and we woke the owners up trying to pay them, when we should have just started fishing lol. I fished a waggler with caster and a 22 to 0.09 and all I fed during the day was 1/2 pint of caster. I caught roach to 12oz, skimmers, hybrids and small tench for 20lb+. I could only get bites on maggot, single or double, but in the last 30 minutes caster on the hook was the only way I could get bites.

It wasn't until the 24th of April that I fished a match, a small one on Century Pond run by Keynsham AA. It was a very hard match for me, I had one 3lb carp, 8 little uns fishing cubes of luncheon meat dusted with fishmeal groundbait. I also had 5 skimmers over a bit of groundbait, in total my weight of just 7lb 14oz got me 3rd and last in the money. The next match was 20th May and back at Century where I thought it would fish a lot better. Alas it was worse and it was hard to get a bite, in the end I caught a few fish by fishing in the margins, and I was 3rd again with just 3lb 10oz.

That was it for my close season in 1999, not much fishing as I had a very young family and I found myself travelling away from home with my job more. At the end of the day you've got to find the right balance and as someone once told me, your kids won't be young for long don't miss out on their childhood. I'm not sure if I will be able to get out on the river before the end of the season, it is going to be dirty and cold as the snow melts and salt goes in, I might consider a day off work if it looks ok and I can get the time off. It really is about time this close season was reviewed, I read a report which says the only fish that are likely to spawn early are Pike, Dace and Grayling. We miss fishing the river when the fish have to be at their fittest before they spawn, that means they need to feed hard. If we get a mild Feb / March the end of the season can be the best fishing, and that is because the fish are triggered into feeding up, bream especially figure in huge bags. Then when we are allowed to fish it in mid June the fish are in their worst condition, tired and damaged from the rigours of spawning. It doesn't make sense at all to me, I'd be happy for a close season of sorts if it is shown it is needed, but say one from Mid May to end of June. Just my opinion and formed from reading many views, but I truly believe it really is time to change this ancient rule.
Posted by Tim Ford at 16:36