The Angling Trust Winter League final this year was to be contended by 33 teams of 10 anglers which in reality is the top teams in the UK trying to win this. Five of the team are allocated to fish the drains and 5 on the lakes at Decoy. Our five on the drains were Lee Trevitt, Andy Ottaway, James Carty, Tom Morretti and Ian Paulley. These lads had all fished here before and were catching well in open matches.  the five on Decoy were Andy Cranston, Tony Gilbert, Luke Sorokin, Rob Jones and myself.

I spent Thursday night and Friday morning making rigs and hooklengths to cover all the eventualities I had been told I could be faced with. I was more than happy with the prep and popped into Scotts to get some maggot and pinkie and set off on the long drive to March. I got to the digs about 6pm and some of the lads were already there, I shared a room with young Tom. We had a really good night out some beers and a very good curry, bumped into a few other anglers including one lad who was right off his head and had lost all his mates lol.

Up early Saturday, not much sleep but no hangover, Tom took my advice and used the bathroom and left the room before I did my daily routine... Andy C and Tony had gone early to get to the draw, the rest of us had breakfast, Luke was the last one down, bit of a sore head for him but he was getting over his van and all his work tools being nicked by some thieving scum in the week. Went outside and we had to deice all the cars as there had been another hard frost, then Andy sent us the pegs we were on. The boys on the drain were happy that they had all avoided the real bad uns so were hopeful of doing OK. I drove then to Decoy to find out about our pegs on the lakes. We met up with a local lad who gave us a run down, he said none of us had drawn any good, and that I was on one of the worst pegs on the whole complex, his advice was just try to get a bite. I was disappointed that I would not be on a sensible peg.

I drove on to the parking by my lake, I was on ELM, peg 1. This is in the corner by the car park and is nowhere near the fish which we were told were on about peg 10 and opposite on 16. I didn't go to the peg in a piss, I am more philosophical about drawing poor pegs in team matches these days, and I thought to myself if you catch a fish you've done well and got my head round that.

I sat on the peg and surveyed my lot, on this lake as it is double banked you can only fish a limit of 14.5m of pole, and you can only fish the same distance on a straight lead. There was a feature with an aerator tethered to the bank about 14m, you may see it in the photo, but as this had been running for a couple of days to prevent the lake from freezing over I had bad vibes that the fish wouldn't want to be near this as it would have stirred up lots of cold water. 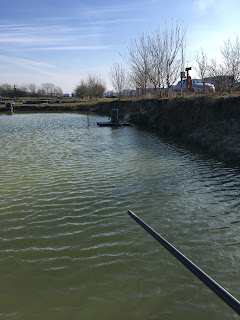 The biting Easterly wind was blowing straight at me and despite me having seven layers on and 2 pairs of gloves I knew this was going to get at me later. One of our anglers was more prepared than me for the weather, though being a Leeds fan I know why he dresses like this lol! We also wound a few people up the night before saying on Facebook he was arrested by Police, which was funny. 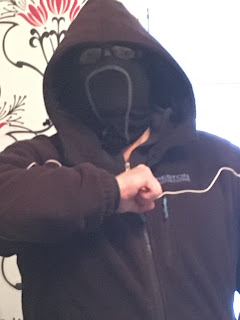 Back to the peg, and the peg opposite is not directly in front of you, but slightly to the left, so I was the nearest angler to the end bank. This lad told me he had fished this lake last week and our pegs blanked. To my left was an angler from Maver North West called Josh, we had a chat and he knew we were in trouble but he was happyish as he had an empty peg to his left.

I of course started the match dobbing maggots (bread is not allowed) up the end bank, it was an awful bottom, no ledge just a steep slope. After an hour trying various depths and distances I'd not had a sign. I fed a tiny amount of maggot by the aerator, and also at 14m straight in front. Another hour and not a sign, and neither had the guy opposite and next to me. I fed a small ball of gbait with 4 pinkies in it about 12m and as far to my right as I could, I was hoping for a little fish or a lucky skimmer over this.

Three hours in and nothing and I had fed a few micros with the maggots, Josh next door has his first  bite fishing way off to his left, a skimmer, about 15 mins later the lad opposite has one too. Josh said the lad below him had 2 skimmers. I now went out to 14.5m and fed again as far left as I could with some micro just hoping a skimmer might get lost and come up to my end of the lake. Sad to say it never happened, I never had a single bite all day, and spent best part of an hour fishing a single pinkie for a roach. Not one dip. The wind got worse and made my nose run all day and my eyes water, or maybe it was tears lol. Right on the all out Josh had another skimmer and fair play to him, the lad opposite had nothing more. I was totally gutted that I had blanked, but honestly rarely have I gone 5 hours without a single sign of a fish and my legs were freezing cold.

As anglers began to pack up and local lads with scales wandered around I was asked twice (I kid you not) "did you get a bite mate?" Not "what did you catch?" and one lad said your peg never gets a bite in winter. I don't want to sound bitter, but it makes no sense to me to put in pegs which are like this, when the winner of our lake (and match) weighs in 105kgs from peg 16 and has an empty peg one side of him, peg 15.  On peg 14 there was 17 kilo. Dan Ashington opposite the winner had 54kgs and also had an empty peg. I don't care what anyone says about leaving big gaps on a lake like this for the fish to move into, the fish were not moving anywhere. On those empty pegs it would still have been hard but fish would have been caught. My view of the lake looking down it. 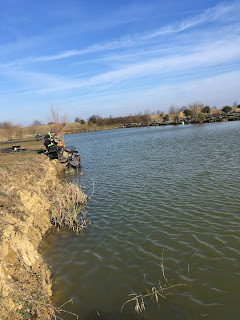 I was the only blank on my lake, one guy had 50g, lad opposite 350g, and Josh had 1kilo 350g. Lee Pesticcio was stand out performer from his peg, but still couldn't do no better than 7th in section of 17 with 7kilo.

The rest of the lads on the lakes had all struggled, and it seemed no one of us had got a draw, from that point of view it looked like we had bombed right out. Time to get in the car lick my wounds and drive home, making a stop for some grub on the way.  driving back I found out that on the drains the boys had excelled themselves. Andy O was 4th in section, James 2nd, Ian 2nd, Lee won his section and Tom won his section and the match on the drains with just under 12 kilos of roach. It was a good day for Tom on his last match for Thatchers as he now lives in Norfolk. well done young man you are going to do well for many years to come.  Amazingly that meant the team had just 11 penalty points on the drains and as a team won that side of the competition, quite simply awsome lads. However, as we were to find out we had 63 penalty points on Decoy and were not far off the bottom on that side of the competition. As someone said you lot are not any good at bingo lol.

Overall Maver North West won, so well done Josh and team! Barnsley Blacks were second and Starlets 3rd with 73 points.  Thatchers were agonisingly close, as we had 74 points tied 4th, but on weight we were 6th and picked up £600 for team funds. If I caught just one 1/2oz fish we would have come third, and that was hard to take I can tell you. The lake draw had really hurt us all, but on reflection to come 6th out of 33 of the best teams around is still a good achievement.

Writing this blog on Sunday I feel OK, not going to dwell on what happened because I know I tried my hardest and felt I couldn't do anymore. I've had my share of luck in the past on these finals as an individual, and many don't get that chance, so it is all about taking the rough with the smooth. Well done to everyone that fished, it was certainly done so in good spirits despite the weather, I reckon it took me an hour to get warm in the car going home!  Let's see what the weather brings this week, more freezing temps, and snow are forecast, so could be interesting for Viaduct final round next Sunday.
Posted by Tim Ford at 12:47