Start the blog off tonight with a mention of Charlie Barnes who I was told had passed away yesterday. If you knew Charlie then you know he had been in ill health for a few years, but despite that he kept himself active on social media and often sent me a message about my blog. I remember drawing next to Charlie a few times in matches, the first time was in Portadown on the Bann. I didn't know him but he asked me my name, and told me would struggle and we chatted all match. I managed to beat him on this day and congratulated and told me I had fished a good match. As a young lad that stuck in my mind and I was always pleased to see Charlie on or off the bank. RIP my old mate.

There was a little speech made at Viaduct by Nicky Collins for Charlie and we held a minutes silence, then it was time for the draw. Myself and travelling partner Ron Hardiman were on Campbell and both praying for peg 110. Tony Gilbert was drawing for my team, and when his turn came 110 was still in (peg 1 team draw) but Tony drew peg 10, oh shite.... This is probably the worst team draw, Tony Rixon's team were last off it first round with possibly a record low score! We had peg 1 on Spring, peg 11 on Spring, peg 60 on Lodge, peg 88 on Carey and I was on peg 123 on Campbell, so as far from peg 110 as possible lol!

I looked at the previous weights off the peg and wished I hadn't, last round John Moody had 1lb 12oz off it and yesterday the angler in the open packed up. I got myself settled in and surveyed the swim, straight in front of me were Dick Bull on 119, and Ron was on 118. 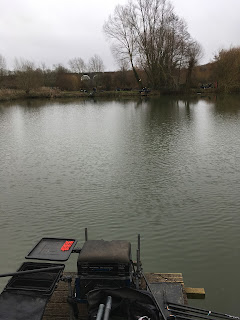 Of course I was in a corner so had a long margin and end bank to fish to where I was hoping that some carp may have considered taking up residence. 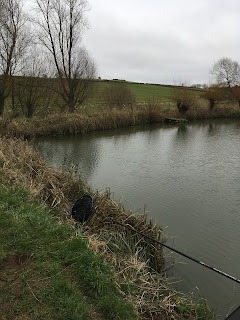 I started the match by feeding casters on 2 lines at 14,5m and at 13m in the margin. I then chucked the lead out towards the pallet in peg 122. By this stage Ron had already hooked a couple of carp in his margin but had lost them. I had bread on the lead and after about 10 mins the tip sort of twanged and dropped back a bit, I struck but nothing there. Cast out again and next chuck another indication of sorts, nothing on the end again. Was wondering now if it was liners or roach taking the bread, so I cast out with meat on. Never had a rap on this so wound in and went dobbing in the margin just past my caster feed and all down to 16m. Not a sign at all and so after an hour I went out on the long caster lines. At this stage not much had been caught by the anglers to my right, no carp, and most were now on the pole looking for silvers. Matty Toomes was next to me on 125, then Chris Fox, then Dan White, and on the spit on 128 was Craig Trigger Edmunds. 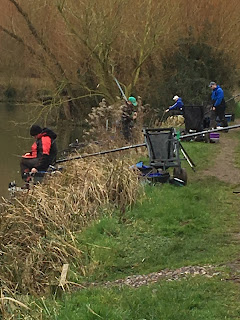 The long pole caster line to the left initially was a bite a chuck but only from tiny roach which were hard to hit on the caster. Going onto the right line the float sat there, good sign that there were no roach I thought. Then a proper slow bite and a little 6oz skimmer, next drop in and a 10oz skimmer, next drop in and I bumped something. Well I never had another skimmer all match! The pole lines were now just full of plippy roach so I fed more casters, I fed the roach off and that was the end of bites for a very long time.

Two hours in and about 1lb 4oz in the net, still nothing in the margin so time for the lead again with meat. I cast to the left of the platform again and again not a sign. I wondered if there had been a carp there it might have moved to the other side of the platform, I took the clip off and cast out and it landed just about where I wanted it to. I think it was only about 3 minutes before the tip took off and I was into a carp. I took this very carefully, and played the fish with care, it stayed on and I was bloody happy when I put it in the net, I estimated it at 9lb. I hoped that I might have found the carp but there were no more signs on the lead here, so I cast further to the right along the bank to search for them, but no signs.

Ron and Dick were doing well opposite and I thought surely there must be another carp on my side, but it seemed not. I hardly had a bite on anything for two hours, I did have an 8oz perch on caster in the margin, but really it was rancid. About an hour to go I had a few small roach on the long pole on maggot which might be useful to get me an extra point or two at the wrong end of the section lol. I went through the motions on the lead and in the margin on the pole, then about 20 mins to go I tried a single maggot over the caster margin line, stupid really as I should have used my dobbing rig, because yes I hooked a lump. Had it on for about 40 seconds before it snapped me as it plodded off to peg 121. That was the end of that.

It was obvious I was going to do poor but was not sure how bad. My carp was weighed in at 8lb 11oz, and the silvers just 2lb 4oz, so 10lb 15oz. This ended up giving me 8 points out of 18. The lost carp did not cost me much as Trig had 9 points with 18lb 14oz. I beat a couple of 10lbs so the few roach did help a bit. Mat struggled with just under 7lb, and it was generally poor int he middle of the lake.

No surprise that peg 110 won the lake and the match, but well done to Ben Broxon who had 186lb. Ron did well on 118 and his 13 carp weighed 99lb and he was second. There was a surprise though in the silvers, Thatchers team mate Luke Sorokin caught a brilliant 42lb of skimmers on peg 129 to win the silvers and his travelling partner Rob Jones was second in silvers with 27lb from peg 98 on Carey, skimmers on the wag and corn. Picture of Luke and his net... 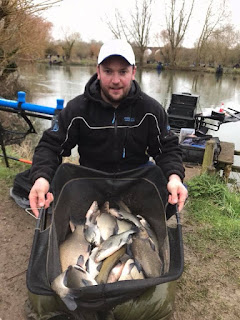 Well today I finally copped a bad one, and there was no get out of jail. I was 7th individual in the league after 3 rounds, but that will be gone for a burton now. I still can't complain, some anglers have had four bad draws and I always knew Campbell would be more or less decided at the drawbag and that's winter fishing.

Next weekend I am fishing the ATWL final, it is on Saturday but the blog won't be done till Sunday. Five of us on the drains, five of us on Decoy Lakes. I am on the lakes and fishing it for the first time, so a flyer would be very helpful, lol!
Posted by Tim Ford at 20:24