Having had a weekend off I was or should have been well prepared for the third round of this popular league. I was on Spring Lake this week and that meant fishing for some big carp, some skimmers, and if on a real shite peg trying to catch roach on caster. I tied a few hooks for silvers and redid those rigs as I needed deeper rigs than I used on Match Lake last time. I made a few rigs for fishing in the margins in case I drew one of the corner pegs, and mixed up my favourite gbait mix, Sonubaits F1 Dark and Worm Fishmeal, plus a little Supercrumb black. All done off to watch the Gas lose, balls...

6:40 and Ron Hardiman arrives to pick me up, and we were soon tucking in to large breakfasts at Cannards Well. I swapped beans for an extra hash brown as beans and me don't get on well, must say it was probably the best one so far. Ron is a great driver and great companion, the drive there and back goes quick as we discuss many topics, must say Ron is not having any luck at the draw in this league and today was no different as he was on 20 on Spring, crap. I was asked to pull for my team, but I think there were only 2 or 3 pegs left when it was my go, by this time Steve Long and Simon Hebditch were having a right old laugh as the last 6 pegs were all poor but each time it seemed the best of them came out! I could see only 8,9 and I think 10 on Spring when I drew the team peg, luckily I got the one with 8, definitely better than the others I think. We had a poor draw though, and the writing was on the wall for a bad un.

Got to my peg and started setting up, nobody on peg 7 yet, and they took a long time to arrive, should have guessed really as for the third time I was next to Dan White! People will start to think we are an item lol! I thought I had better include of pic of Dan sat like gnome, all he could do was fish a top set for carp on his peg for whole of the match. 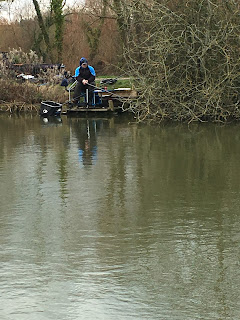 Not really any point of showing a view of my peg straight out in front as I was not planning on fishing there unless I really had to. My match was going to be all about fishing down to the right towards the corner under the branches. 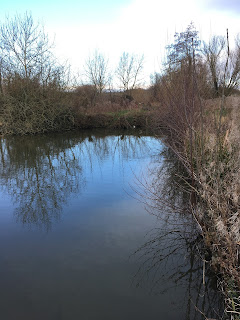 I set up a couple of silvers rigs for out in front, 4x14 silvers and a 4x12, but as I only had two tiny roach for 1oz not worth mentioning these. For the margin to my right I set a 4x12 Maggot Float (all floats from the Des Shipp range) with 0.17 Powerline direct to a size 16 PR456. I also set up a lead rod with a size 16 PR38 to 0.19 Powerline for hair rigging baits if I felt the need to chuck right to the end of the bank. Ready to start I checked the results sheet of the last two matches to see what my peg had produced, a blank and 12oz, ooer mother I said, or something similar.

On my left today was John Howell, another angler who has had an awful run at the drawbag, I didn't rate his chances at all. On the all in at 10:30 I fed 4 balls of gbait out to 14m, I think I had fed 2 of these when Dan hooked and landed a 10lb+ carp, good start Dan! OK my turn I thought, I stuck a piece of bread on the 16 PR456 and shipped out to 12m, I didn't want to go past any fish and so I thought this was a good place to start. Sadly the carp were not in residence, at least not here, so I gradually worked my way along the bank to 14.5m but not a sign. Undeterred I decided on a change of hookbait and went with 5 dead maggots, I did this as the lake was not clear, I guess the rain from the last week or two put a bit of colour in it. Anyway, I followed the same routine, and started at 12m, when I got to 14m I thought the float dipped, I struck but the float came up and out of the water 6" and I dropped it in again when it seemed to sink. Another lift and the float came up and didn't move, I pulled hard to the left and thought I was in a snag and then the pole jerked a bit and I felt the kick of a fish. Shipped back steady but the carp put up no fight and I soon scooped up a 8lb mirror, phew some points. An hour had gone.

It was another blank hour and I was on the maggot again and out at 14.5m when the float shot under, but when I struck nothing. A slight dip and nothing, so I shipped back and changed to bread. Ten minutes later and another bite and this was hooked, but bloody hell this fish ran to the corner, and a carp jumped out of the water, but not sure it was the one I hooked. I pulled as hard as I dared and the fish came out into the open water and kept going, luckily I managed to stop it and turn it and gradually got it back to about 8m of pole where I struggled to get my sections apart. I knew this was fouled, and when I got onto my topset it was all a bit tense as the fish came up tail / back first. After what seemed an age I got the next under a long common approaching 15lb. It was hooked up the arse, lucky me.

All signs of fish stopped after this, and I could simply not get an indication. Meanwhile Dan took two more carp from the bush and was beating me. I chucked the lead for a bit, to give my back a rest as much as anything, but no bites.

There was not much going on, Craig Edmunds had one carp on peg 4 on the lead, but he lost two, I couldn't see much more as I had my back to more than half the section.

I had fed a bit of meat at 13m, never had a bite hear, and with an hour to go decided to put a full toss pot of maggots in at 14.5m. Twenty minutes to go and still no signs, I went to 16m which I had done a number of times, with 5 maggots again, and I had indication, when I struck there was a bit of swirl as a carp spooked off, damn that was my chance gone I thought. However, with less than 3 minutes to go I had a proper fast bite, and fish on. Once again I pulled hard and this fish came out, and whilst heavy was not going mad and was clearly hooked properly. I was playing it when the all out was called and soon after got another big long common in the landing net, it was a struggle to keep it in and I was a but nervous lifting it out. All went well and it was another fish of around 15lb I thought. Another late carp, even later than last match, and I am sure Dan must have thought not again lol.

Packed up and thought would I win the lake and whole section. The scales were coming round from peg 20, and I squinted to see if any carp were caught. When the scales got to peg 13 I saw that Mash was winning from opposite on peg 15 with 35lb, 3 carp and some bits. The lad on on 13 (Ben Bronson I think) also had 3 carp, his were a good size and he went into the lead with 38lb 6oz and I thought it would be very close with me. A couple of double figure silver weights followed, and then John struggled to 3lb. My turn, and the three carp were weighed by Steve Long, I could not see the scales dial and hoped to be lucky, I was as they went 39lb 7oz. As Dan's carp were smaller, he weighed 30lb, I knew I had won the lake, happy days. Luke Sorokin took a picture for me, he was supposed to get the Viaduct in the picture for Steve, but alas David Bailey he ain't. 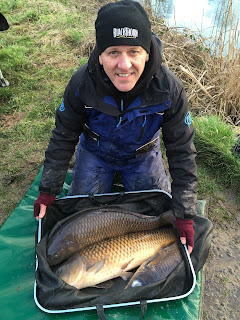 Back to the Lodge and the team had done badly again sadly, thought I thought everyone did well from their pegs, and in winter you cannot beat the draw. As for me, well that is three bullets dodged and three pick ups so definitely luck on my side.

The match was won by Clint Wojtyla on Carey 102 with 125lb, he was closely followed by Chris Davis with 123lb from Campbell peg 110.

That man, Des Shipp, won the silvers with 24lb from peg 61 on Lodge. I wish I knew how he does it, he is on a different level.

That's it then, no fishing for me next weekend, then round four here at Viaduct when I will be on Campbell, at present a peg nearest to the car park bank is where you have to be, what will be will be.

Oh one last thing, today is World Cancer Day, and so my thoughts go out to all those people who are affected by this shitty disease, I've now been 7 years free of it, and that is my luckiest thing of all. Tight lines everyone.
Posted by Tim Ford at 20:39