Hope everyone has had a good time since I did my last blog, I certainly did as I had a week away in Zante which was once again brilliant. I found a lovely little resort there last year and love it, will go back again for sure. My view from beach restaurant.. 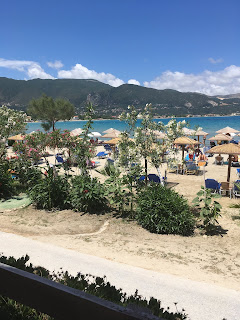 I got back on the Monday night, back to work Tuesday and Wednesday after work I drove to Somerton to meet up with the lads on the fishing holiday that I usually take part in. However, I was only staying for a curry and then back home. Fair to say they all looked knackered and a few of them a bit pissed, lol. I missed being with the lads, but Zante with my wife was always the first option for me this year.  Whilst on holiday I was asked if I wanted to fish the superleague round on the Bristol Avon up at Staverton and Bradford on Avon, I said yes and was booked in for the open match on Sunday 17th June.

I ordered some bait in the week and managed to make a few rigs and sort out some top sets on Friday evening, had no time Saturday as I had to drive to Plymouth and back, my eldest daughter has finished Uni now and so we had to empty her flat. Woke up 6:15am Sunday and was looking forward to being on the river again, even though I think the river is much better a month into the season, history shows me (certainly on the lower river) that a few bream weights dominate.

The draw was in McDonalds in Trowbridge where I met up with a few team mates, Andy Cranston, Jack Jones, Andy Ottoway, Lee Trivett and Martin Barrett. A quick bit of grub and the draw was underway, most locals said you needed to be at Staverton, and a few decent fish had been caught there yesterday. Of course I drew at Barton Farm, peg 4 which was about halfway down the path I guess. Not a clue about this area, all I know is usually further down past the gate is where the bream are. Martin and Mike Withy both told me I was on a chub peg, hmmm never keen on them having a feed this early, but I would give it a good go. The trees to left of the picture are in dead water and the only pace I could find was from 13m to about 10m off the far bank. 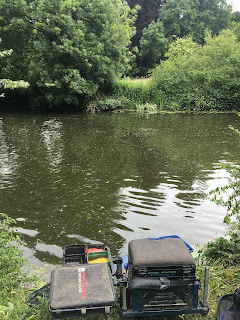 The match started at 10:30 and I was a couple of minutes late, I threw in 6 balls of gbait at 13m and began feeding maggots further across. I started on the 2g rig with caster hoping for a few better fish, but sadly it was not to be and I could not get a bite. On to the pencil float with a maggot and I began to get bites from tiny roach, it was a bad start and a bad sign I feared. I did manage a 6oz perch but everything else in the first hour was tiny, and I reckoned to have 1lb 4oz. Meanwhile below me Andy Cranston had caught perch to 8oz and roach to 4oz!

After 90 mins I was on the waggler, and it was a bite every cast with fish taking the bait within 5 seconds. Sadly it was chublets and bleak there were 1/2 to 1oz, although I did get a couple of 4oz chublets. I dropped back in on the pole which I had topped up a couple of times and I had 4 or 5 roach about 2oz to 3oz but then no more. It was cleat there were few fish in my swim of any quality, unless there were some bream and chub about. With half the match left I fed positively on the pole line hoping to get any big fish on the feed on the deck. I upped the feed on the waggler but was still catching tiny fish which were spewing up maggots.

About an hour to go the heavy feeding across had fed off the bits, but sadly no bigger chub put in an appearance. A few goes on the pole with bigger baits also didn't reap any success other than a 4oz perch. When the match finished I knew I was going to be an also ran  today.

The scales weighed from the bottom end where there were a few weights around double figures, perch roach and odd bream. Then just below the gate an angler had 7 bream for 41lb. Cranny below me had 7lb 12oz, then I had 6lb 10oz of snots, more than I thought. The next peg above me was about 80 yards away, he had 4 bream and weighed 23lb, and then next two anglers also had a bream each plus lots of perch. Gary Etheridge on the end peg only had 5lb+.

Up at Staverton I heard a lad had 16 bream for 78lb, and a couple of pegs below him Richard Chave had 4 bream and some roach for about 21lb.

Well it seemed the river fished a bit better than I thought, but gutted I never managed to hook any bonus fish today, such is life. No fishing for me next weekend, and then it will be back up here for the Superleague.
Posted by Tim Ford at 19:29