Life has been extremely hectic for me since my return from holiday, lots of business travel and little time to plan for fishing. I went to Munich Weds to Friday (it was a bit funny when Germany lost lol) and Saturday I drove to Manchester and back as my eldest daughter has moved there with a new job. Suffice to say when I woke up Sunday morning I was feeling tired, and lets face it this hot weather doesn't help either. A quick drive to Trowbridge for a McDonalds and met up with the rest of the team. Lee Trivett has done well on this venue recently and so we turned to him to draw the peg and give us any info he could on the pegs we got. Lee couldn't actually say anything about my peg, and the last match here I saw the results and it is was DNW.

The great thing about this place is that you can park your car behind your peg, and every peg has pole with the peg number on it like this. 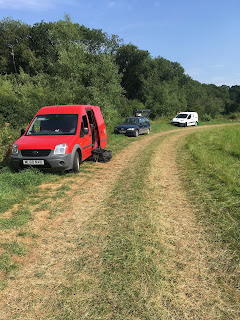 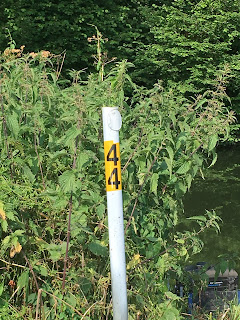 I have to say the peg had lots of features on the far bank, although, and I know this might sound daft, I was concerned there was too much of the trees in the water. Basically there was a jungle opposite that came out a good 6 metres from the bank and I could imagine with the sun and clear water the fish would be happy to sit under it all. It looked like this. 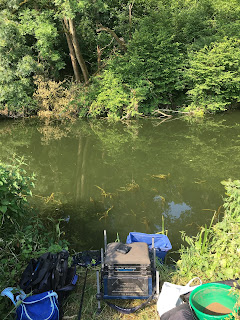 In my section were below me Mark Williams, above me Dave Micklewright, then Gary Etheridge, Steve Priddle and finally Jon Tocknell. No mugs there, and it seemed based on local knowledge Gary had a good peg. Dave, myself and Mark were pegged very close, it was not good at all, and were told we were on chub pegs and not good for roach. Another chub peg in the summer lol!

The match started at 11am, I cupped 4 balls of gbait containing a bit of loosefeed at 11m and a couple on the other line. I went straight out to 11m and hoped for an early bite, that did not happen, in fact I had 1 bleak and 1 roach on the pole in 15 mins and with Martin Barrett behind me egging me onto the wag I went with it, especially as I could see Dave and Mark had about the same as me, feck all! The wag started well for bites from very small chublets and bleak. It certainly wasn't hectic though, and soon bites tailed away, I had to cast in different areas to try to get a bite and way before the hour was up the bites had dried up. I thought I had about 10oz after an hour. Dave had followed me onto the wag and by casting a little upstream into a bay above a tree he caught some small fish and soon moved ahead of me.

I really struggled from this point on, I could not get a bite on the pole lines, and had to cast the shallow wag so close to the feature in the hope of a bite that I lost a few hooks, though mainly to underwater branches that I could not see. After 2 hours I hoped I had a pound, Dave had more than that for sure, and Gary had at least 2 1/2lb but had lost 3 chub and 2 perch! Mark below me was struggling badly and so I was at least beating one person. I kept rotating all the lines, but the pole was a complete waste, but I had to rest the waggler, I was surprised that I had not caught on the deep wag, and the strung out pole rig only held a couple of times with tiny bleak.

With about 2 hours to go Dave had two chub across, and he had lost one earlier, and now was a clear leader. I upped my feed as I was going nowhere and thought chub or bust. Dave hooked another but he could not get it out and it snapped him. With about an hour to go I had another go on the deep wag (trying another depth change) when the float dipped and I missed a bite towards the end of the peg. A few casts later another bite in the same spot and a 6oz chublet was landed. Next cast and the float disappeared with a bite on the drop, it was another chublet about 8oz to 10oz. Next cast a roach, maybe time for a few bites, sadly not! I managed another 4oz chublet , dace and 2 roach on the deep wag, and a couple of tiny fish to end the match. Those three casts were I hoped going to help me out overall, though I had no idea how the anglers above Gary had done, so my best chance was 3rd as I was sure Dave and Gary had beat me.

We weighed from Jon Tocknell, and he had struggled for 1lb 12oz, then a very grumpy Steve Priddle weighed in 2lb 7oz, Gary had 3lb 4oz and was cheesed off with the fish he had lost. Dave's chub and chublets went 5lb 12oz to easily win the section. My turn next and my meagre catch went 2lb 11oz, and with Mark only getting 12oz I was 3rd so 4 points out of 6.  I'd rather come 2nd as you get money for that, but quite frankly I only dropped of one 3oz chublet and lost nothing else.

Back at the Kings Arms for the results and the river had fished OK either end and hard in the middle. Sheet below shows the section 1st and 2nd.. 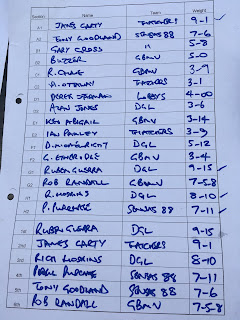 The winning team today was Garbolino Blackmore Vale, DGL were next and Thatchers 3rd. Overall there is nothing in it, with DGL 61 1/2 points, GBV 61, and Thatchers 59.

Not sure if I am fishing next weekend, it looks like it is staying hot for another week or two, so I might get out to the coast if possible.