to blog or not to blog

Well the last few weeks have been busy, and since the superleague at Staverton I have taken the opportunity to spend some time with my wife on Sunday's, watch the world cup games with Glenn Bailey and our friend Thatchers Gold (sometimes we got to know him too well lol). Had a lovely time last Sunday in Dartmouth, what a wonderful place, saw some huge mullet there, but the whole place was a joy to behold. 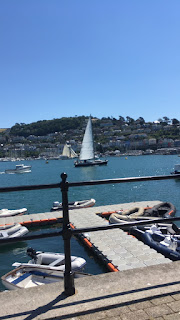 I was working in Munich when Germany were knocked out of the world cup, lol, and got back late Friday. Had a few nights out and a great one this Friday when I went to T20 cricket to see Glos v Somerset thanks to my daughter Lucy who my the ticket as a present. Ended up with 12 of us going and despite the rain, or maybe because of the rain we had a cracking time. 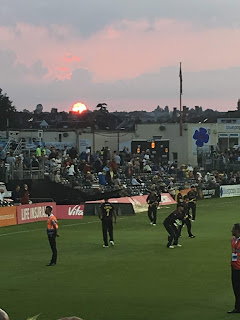 I could have gone pleasure fishing this Sunday, after a trip to Bristol bus station, but I couldn't get the enthusiasm up to do it, plus I had no bait ordered. Instead I decided I would take a walk up  Newbridge and see if anyone was fishing as I hope to be fishing this next week and again on the Riverfest the week after. I took my binoculars so I could also do a bit of wildlife spotting too. As it transpired there were some anglers fishing and it was some of the Fry's lads that I first saw. I was saddened to hear that the new development at Frys has forced the lads away from the venue they have fished for many years. A season ticket was priced OK, but they were being asked to pay for parking every time too, which was not in the original deal. Sure there will be plenty of anglers who will be happy to know Frys is off the fishing agenda, but for me it is the shape of things to come, the thin end of the wedge. Pressure on the Bristol Avon from pursuits other than fishing is increasing, and people living on boats moored on the banks is the biggest change we see. As less anglers want to fish rivers angling clubs lose tab sales and won't pay much for the river rents. Boat owners seem to be able to moor anywhere, and Farmers are in some areas clearing trees for boats to moor up, that means at best good swims are ruined, at worst it is a peg lost for good. I imagine a few boats pay the same as a club, and as money talks there is only going to be one result on the river local to me I fear. The river is currently full of fish, more chublets than I can ever remember, plenty of roach, perch and of course bream and pike. Not every peg can win, but that goes for any venue. We have a couple of super leagues, commercial house winter league, and ATWL on the river, I look forward to them, I will enjoy them even if I do no good, I'm beyond worrying about how I do these days, more about the enjoyment of life.

There was some amazing wildlife on the river today; a kingfisher, buzzard, raven, dragonflies, more birds, ladybirds (UK not Chinese imports) and so many crickets and grasshoppers. Sadly the young lads in motorised dinghys and various other inflatables no doubt had no clue what the river actually supported, nor that wildfowl have long since deserted the river because of the noise. Talking of wildlife I sat behind Derek Coles for a bit, he was on peg 20 catching bits and bobs on his favourite long rod, ending up with about 11lb. Mike was on peg 24 and had a decent bream and lots of roach and chublets for 16lb, and Dean on peg 30 had a virtually similar bag to Mike for 15lb. Bites all day.

I walked on downstream and came to a Spanish angler Rueben who fished for Diawa Gordon League, he was sat on peg 50, a peg that has a lot of form in the summer. He was getting a roach a bung on the pole, until a pike turned up, and then a short while later another heavy fish took his bait on a light hooklength, Perch, Pike, hmmm no bream! See Video, I had to edit it down as it took Rueben about 10 mins to land it.


Rueben tried to catch another bream but only succeeded in catching perch and more roach, it was solid. When he chucked the feeder out I looked at my watch, it was time to go home and get the BBQ going so I could eat before the footy final. Suffice to say the few lads on the river had fun, pleasure fishing is always easier than a match situation though and it will not be as good on every peg come match days. Still, plenty of food for thought, and the lack of rain does not seem to have affected the river too badly. Hopefully next week I will have something proper fishy to blog about!