This is not the blog I was expecting to write..... I was all ready to fish a match at Newbridge as a practice for the RiverFest qualifier there next Sunday. Got a call Tuesday from Martin Barrett to say the team was short and needed me to fish, I protested but Martin said I didn't need to practice for a match at Newbridge, and so I was fishing the Huntspill. I like the Huntspill, generally a few fish to go at but end pegs can dominate.

I had another very busy week and no time to prepare (much) for the Spill, primarily because I was in charge of a day out with 20 people at Donington Park watching Truck racing on Saturday. I organise a sponsorship of a driver, and he is currently winning the championship, go Ryan Smith! It was a very long but fun day out.

Up early again Sunday and grabbed all my bait and gear and stuffed the car, Mr Barrett was bringing my gbait for the feeder, ready mixed. I got to Laburnham House and had a couple of sausage / bacon sarnies and a cup of tea and paid my pools. Martin did the draw and told me I was on 37 on the North Bank, "spawny git", "You Jammy Bastard", etc, etc. were shouted at me, this peg had won the last match and another little knock up with bream. About time I had a flyer! Then I heard "redraw".... you effing bastards! Back comes Martin with peg 42 in the same section, that's OK they said it is the other end peg!

I drove towards Gold Corner and parked up in the little carp park, first person I saw was Mark Williams of Nomads, he said he had peg 43, ummm, so you're end peg not me then... f.. sake. Day was starting well, lol. Paul Purchase had drawn 37 and I could not see him messing that up. A steady walk up the bank and got to my peg, well I could not fish right in front of it because of reeds, so I had to fish 2 metres to the left. I told Charlie Valender who was next to me that I would cast to the right. 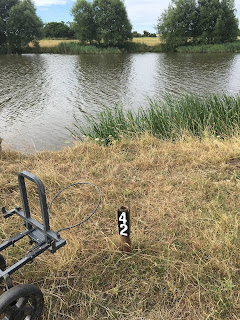 As far as I was concerned this section was going to be won with bream, and for me to do any good for the team I would have to catch some. I set up a feeder rod for chucking down the middle of the river, had 0.13 powerline to 16 PR355 on this. The only other thing I set up was a waggler, 4AAA with 0.104 Exceed to 18 PR333. That was all I set up! I had a couple of senior moments, left some gbait behind for the pole, but Dan Squires had brought a barrow full and he gave me some ready mix, cheers Dan! Then I thought I had left my had and sunglasses at the draw, Charlie got me a cap, just as I found them fallen in my bait bag!

On to the fishing, 11am start and I cast out seven big feeders with chopped worm, casters, dead pinkie and squatt in. Meanwhile I threw little balls of gbait out regularly about 18m ready for the waggler.  I started on the feeder, and second cast had a twitchy bite and swung in a 2oz rudd. Thirty mins in and Mark next to me has two bream in two casts on the feeder, so I stuck with it. On the hour I had nothing more, Charlie had one small fish on the tip and tried the pole, after a couple of roach he had a bream, and 20 mins later he had another bream! Roughly 90 mins in and I've got 2oz, two bream either side, Paul and Andy Ritchings next to him look to have a couple of bream and the lad next to Andy has one. Two hours in and still nothing, so I tried the waggler to try to get a little more in the net and "rest" the feeder. I had a few small roach and a little skimmer on this, I had to fish well overdepth to keep the bait still as the wind was blowing down the river and causing a tow. However, as the wind increased the tow went from being with the wind to against it. When I went back on the feeder the quiver tip was now bending round quite a bit due to the tow. Many people seemed to struggle to catch fish at this time, although Paul still had a few.

Two hours to go and I had still not had anything on the feeder, Mark had caught another bream and a skimmer, Charlie was catching the odd eel and roach on the pole, Paul and Andy were miles in front of everyone else. I took a few more small fish on the waggler and a bonus 12oz skimmer which meant it was tight between me and Dan Squires for last in the section lol! In reality I was only using the waggler for short spells, probably had three tries at it all day as I spent most time of the feeder. I had taken a few calls from team mates, Andy Ottoway was struggling at Gold Corner, Mark Harper was in a crap section, and Martin Barrett was last in his section, and I said this groundbait wasn't looking a good choice! (It was Sonubaits F1, and some Bloodworm fishmeal).  With about 45 mins to go Mark rang me again and I had to tell him I was still doing shite, as I put the phone down I saw the tip going round properly, struck and I was into a bream. I took my time and was soon putting the net under a 3 1/2lb bream, as I did Mat Parsons walked up. I cast out and within a few minutes had a drop back bite and another bream was on, it fought a bit harder and was probably 4lb. Mat said I would get 5 in 5 chucks now, I wish! I had a couple of casts with indications, maybe liners, but still I thought the bream were still there. Then another cast and I just had a little tap and nothing else, and I left it there, nothing happened, after a while I picked the rod up to wind in and a bream was on! This was a good fish and fought very hard all the way in, over 4lb. A couple more casts and iffy bites, and then Mat went to help Dan again, I wound in and noticed that the main line was tangled around the link swivel. I think this had been like this for a few casts and had prevented bites from developing, damn. The tangle was so bad I had to set up again, and when I got back out there the bream had gone and I had just 1 perch and the match ended.

I was of course gutted that the tangle had cost me a bream or two I think, but my main aim was to hope to finish third in the section, but not sure as I thought it was close between Charlie, Mark and I.

The scales started at Mark, his bream were on the small side, he weighed 9lb 4oz when I had him down for at least 13lb. My turn next, and thanks to the size of my bream I had 14lb 5oz. 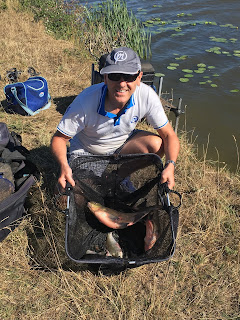 Charlie had 12lb and so I had managed to overturn the deficit on those two. Dan struggled for 2lb and the next lad had 6lb, Andy Ritchings then had about 38lb, but Paul put 66lb of bream on the scales, he had 17 bream in total. Paul told me that he missed lots of bites / liners and clearly had a lot of bream in front of him at times. Well done Paul. 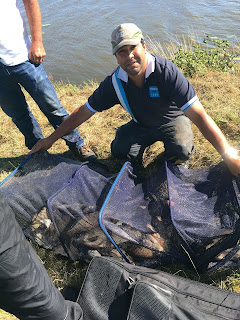 Back at the results and Paul had only come second, Tony Goodland in the next section up from us on the opposite bank had 70lb, wow!

On the team front my lot managed to the win on the day, thanks to section winners, Nick Ewers, Nick Chedzoy, and Martin Barrett who just like me had some late bream, so the gbait did OK. Mark Harper and Rob Jones were second in section and I was third which I was happy with. After three rounds the league is very tight and Thatchers lead by just 1/2 point! The team are back on the Spill next week for round 4, but I'm making way for Ian Pauley so I can have a crack at the Avon on the riverfest.
Posted by Tim Ford at 21:25