First of all an apology, last week in my blog I said the winner was on peg 49, sorry that was a typo, it was peg 59 which I knew, thank you Terry Ellis for alerting me to the mistake. If you went and fished peg 49 in the week, sorry!

Saturday was a right off as far as prep was concerned, as I went to Peterborough to watch Rovers, the best part of the day was seeing my daughter Lucy, as on the way the coach broke down and with Rovers letting in an early goal and losing, and then part of the motorway being shut on the way home it was a long day!

Woke up early Sunday to mix mt groundbait, then on to the Crown in Keynsham where eventually I had a breakfast as they seemed a little slow to begin. Wasn't sure where I wanted to draw today, but didn't think the bream would go today with the river now clearer, hardly moving and not to mention the sun and high temps... Neil Richards drew for match organiser Dave Micklewright and gave him peg 59, Neil then drew peg 7 in the little field for himself which is a peg I really like. I pulled out peg 22 but this was not the permanent peg, and I was told I was up by the bream hole. I got to the pumphouse and started pushing the trolley towards my home for the day. I found I was on peg 49, errr hope nobody had fished it in the week lol! I've wanted to draw this peg for years, though would like to be on it in winter with a bit of water on, last week this peg came 4th I think so a few bream about. 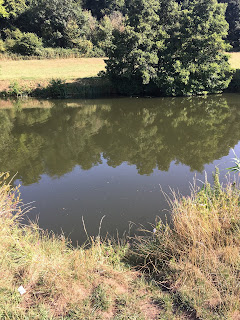 The match started at 11:30, I threw in 13 jaffas containing the usual casters, hemp and pinkie. I picked up the 2g rig and and dropped in with a caster on the hook, I was pleased when the float went straight under and a 2oz roach was swung to hand. I was even more pleased when for the first 30 mins the float went under every time with a roach a chuck. A pike then decided to grab a roach, I hung on and it snapped /bit me off. I put on another hook length and went back out but the pike had stopped the bites, I tried the pencil rig which was set a bit shallower but that never went under either. I fed another ball of gbait and starting feeding hemp.  Back on the 2g rig and bites came back, I started to catch roach again, plus a couple of little hand sized hybrids.

I was in quite a nice rhythm catching roach when the pike grabbed a fish again, I got to see it for a bit, probably about 8lb, and I pulled hard and it snapped me again, but I hoped I given it tooth ache. I decided to try the pencil float (deepened off) before putting another hook length on, and this time it worked as I had a couple of roach, and then I hit a better fish, but I was sure this was not a pike. On number 5 elastic it was a challenge, but I could see it was a bream, and after some 5 minutes managed to get it into the landing net, about 3lb I thought. I put the pencil rig down and grabbed the flat float, but I didn't get anything other than a perch and a roach. I fed another ball and went out on the 2g rig, I caught more roach and a few more perch, though only small. However, after about 2 hours I had a 1lb skimmer and not long after one about 8oz. I was more than happy with my catch rate and carried on catching roach, but then after 2 1/2 hours the peg came to a dead stop, and the pole line was gone. Nigel Wyatt came up for a walk as he was struggling, and as he arrived I had a bite out of the blue, it was a roach that was close to a pound.  I tried and tried to make the pole work but nothing worked and it was dead.

I tried the feeder over the pole line, no good, I cast it down the peg a couple of roach and a chublet and that was it. I'd gone from catching well to catching nothing. The next hour or so I caught not one fish, and went for a quick walk, Jeff Surmon on peg 50 had about 6lb of bits, and Luke above him about 5lb. I went back and tried the pole and worm again, first drop and the float went down, I connected and it felt like a good skimmer, when I got it in close the fish rushed to the bank, I thought it was a chub, but then saw it, bloody jack pike! Not long after this a guy walked past me with a camera,he asked me if I was sponsored by Thatchers, pardon I said, he asked again, I said yes I am. "Wish I bloody was" he said. I realised he meant Thatchers cider lol, but let him go believing I was.

I cast the gbait feeder across and this time the tip rattled, for the last 30 minutes I had a bite every cast, but only from small roach and gudgeon. I tried the pole thinking the fish had come back on the feed, but sadly it was still dead. Match finished at 4:30 and I was tinged with sadness as I really thought I was on for a decent weight, and I thought 20lb would be enough to win.

Scales came down from the end peg, Rueben Guerra on end peg 63 had 12lb 6oz which included some big roach, one would have been near 2lb he said. Dave chucked back in peg 59, and the next few anglers had 7lb+, my turn and I was a little disappointed to see the scales register 11lb 9oz, as I thought I had at least 12lb, so I was second in the section. The peg below me was in the next field and that was fellow blogger Ivan Currie, he had 5lb+ see his blog for details. 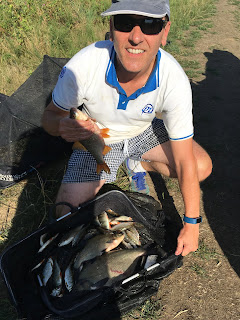 I was really glad to get back to the Crown, I ordered a pint of Thatchers and a pint of water and ice, heaven! Results as follows

1st Neil Richards 20lb of bream, skimmers roach on the pole in the first 90 minutes.  peg 7
2nd Rob Jones 16lb 6oz skimmers and roach on the pole all day, peg 122
3rd Phil Bendall 16lb 5oz same as Rob, peg 88
joint 4th Warren Bates and Dave Clapton 16lb 3oz. They were pegged next to each other, around 26 / 28 and Warren had mainly roach and some skimmers, Dave had a big 6lb slab to go with his roach.

I think the river fished quite well considering the conditions, but we do need some rain!

I got £20 for second in the section, so got my pools money back.

Wednesday I a off to Nottingham to fish the Trent for a couple of days as practice for the division one national, then it is back on here Sunday for the Superleague.