First off for those waiting for a blog on my couple of days on the river Trent you will have to wait, I am short on time and I will do the blog on this before my blog on the National itself. Suffice to say I didn't bag up but I had an enjoyable time.

I got back late Friday night from Newark, and would have like to have stayed in bed Saturday morning, alas I was up early to peg the river for the superleague. I met Warren Bates at the Pumphouse and together we spent nearly three hours putting pegs in. It was not straightforward, and I had to put some pegs in that I would have rather nor fished, but with some pegs overgrown and boats moored up in the trees we had little choice. It was later that day that I went to sort out my gear and realised I was rather short on pole rigs, especially 2 and 3g, worse still I could not find any floats to make rigs up. Luckily the young man in the team Andrew Cranston came to my rescue and said he would bring me a few rigs Sunday, he was also getting my bait, a big cheers mate, thanks!

Sunday morning, I had not slept well and didn't like what I saw in the mirror (who would I hear you say lol) it was not alcohol related I might add. This was reinforced when I got to the draw at the Crown in Keynsham to be told by Dean Harvey that I looked like shit! I passed on the list of pegs to help all the teams know where there pegs were and then got myself a breakfast. The Thatchers team today were myself, Mark Harper, Andy Power (guest), Andy Cranston, Nathaniel Johnson, Luke Sorokin, Rob Jones and Nick Chedzoy. Chedz was enlisted to draw for the team, and he came back with a set of pegs that I thought were OK, but Mark Harper was on one I would not like. I was on yet another end peg, but this time the upstream end peg, peg 3 in the little field. This is a peg I have drawn quite a few times over many years, and I've won money off it more often than not. However, this season it has been really poor with excellent anglers Lee Trivett and Kev Dicks only managing 6lb weights, add to this peg 7 has been bossing this section I really wasn't confident, but I hoped the fish might come back to see me lol. 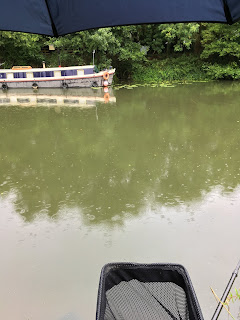 Setting up I had plenty of time and got my brolly up to keep my bait and a few other things dry. I put a feeder rod up and a waggler, but the waggler was really only there in case I was really struggling. Pole rigs were a 2g with 18 to 0.10 and 4g with 16 to 0.12. I was going to put a flat float up but there was not much flow at this stage and I didn't put it up. With the match starting at 11:30 I Was ready on time, and in went 14 balls of Sonubaits finest groundbait (River, Lake and Black) with a good helping of casters and hemp, and a pinch of pinkie and chopped worm. I began the match on the 2g rig with caster on the hook, I had six roach quite soon, but all of a sudden things went pete tong, bleak were a problem and if I did get a bait to the bottom it was hard to get a bite from a decent fish, I was soon on a maggot and my woes continued, and when the first hour ended I doubted I had 1 1/2lb and I was thinking the peg was still poor. I continued to feed hemp over the top and tried both rigs and differing hookbaits but was still only getting odd small fish.

About 90 minutes in I hit a bite on the lighter rig and lots of no5 elastic came out, as I played the fish I really was thinking it was a pike, but after a few minutes I caught a glimpse and saw it was a bream. It was a right pain on the light elastic, and I couldn't get the pole up without the elastic going in a tree, then the bream shot upstream and everything went solid, it snagged me. For about a minute nothing moved and I was now peed off, I had no choice but to pull hard as I assumed it had left the hook  in the snag. Luckily before the line parted the bream came free, and eventually I netted it, but then had to untangle the elastic from the tree, what a plonker! I was also having fun with all the slugs, they were everywhere, nets, rods, poles, luggage agh! 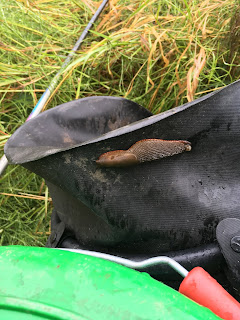 I dropped the feeder in over the pole line looking for another bream, but the tip remained still. Back out on the 2g rig and I had a couple more roach and small perch and then hit another bream, this tore off and the hook came out, it was fouled for sure. I decided to top up with a ball of gbait, and shipping back the pole cup fell of, doh! I got the 4g out there and put two red maggots on, soon after I had a decent skimmer, but then small roach took the bait. Time to put a worm and maggot on, and this worked as I struck into another bream, with heavier gear and elastic this one was much easier to land and a nice fish at nearly 4lb. I topped up again wondering how many more might I catch? Well I can tell you the answer to that, none, no more bream or skimmers showed for me.

I spent the rest of the match catching in fits and starts, when the fish were there (roach) it was good, but for some reason they would go, and changing rigs and hook baits was necessary. I think Pike had something to do with it, and in the last two hours I had more trouble from them than in the first three hours. Steve Priddle on peg 5 came up to see me, he had been struggling and was piked out worse than me it seemed. I landed one about 4lb, and lost another that was huge. The last 25 mins of the match I couldn't get a bite, and this was I am sure down to the big pike being right over the gbait. My smaller pike I landed. 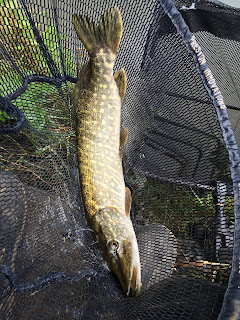 Talk on the bank during the match from James Carty and Jack Jones who had come for a watch was that the river was fishing hard and I was probably winning the match, but I know only too well that bream can show late. However, most of my team mates were saying the same during the match. I had the scales and so once packed up with Steve Priddle I weighed in, the needle swung round to 18lb 4oz which I was happy with. Steve had 3lb 9oz, and then Charlie Vallender on form peg 7 had 13lb+ and that turned out to be second in the section and so I was top in the section. A picture of my fish thanks to Steve. 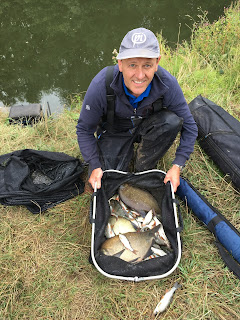 Back at the results and as more and more anglers came back it was confirmed I had indeed won the match, happy days. Even better my Thatchers team had done exceptionally well winning 4 sections, coming 2nd in three and a third in the other. This meant we won the day and now with one match left we are just 1/2 point behind DGL!

Well a bit more prep for the national is needed this week, but a good draw is needed for sure, fingers crossed.
Posted by Tim Ford at 21:29