As you may recall my local SWWL folded this year and as a result Thatchers had to join the UTWL something of a challenge on venues we don't regularly fish. Travelling to Radcot meant I was up at 5:30am to get myself ready and on the road, had to scrape the ice off my car before I could set off. I stopped off at the McDonalds near Shrivenham and within 5 minutes all of the team were there.

The draw was at the Swan pub in Radcot and just after 8am James Carty pulled out our set of pegs, he managed to tell Martin  Barrett he was on the wrong peg, but luckily we got to Martin before he left, lol. I was at "St Johns" and all I could find out was nobody in my ream new what it was like. Luckily I spied Shaun Bryan who told me it was an iffy section and that peg 1 was the favourite peg in the section, I was on peg 2. I had little idea of where this bit of river was, but was told head to Lechlade and then it was by a pub called the Trout. Thankfully I found the right area by asking an angler just as I was about to go the wrong way, but the parking was all gone by the entrance and so I had to park in a layby a few hundred yards away. A Thames legend was in the layby Paul Passmore, and he was in my section too. He said this was only the section he did not want to draw and it was fish in some pegs and not in others.

I pushed my gear up the river with stalwart Brian Melksham, it was mice to be able to open gates and not have to climb over them. My section was looking tough, John Bohane on the downstream end peg, Richard Chave next to him on a peg with a lovely bush on the inside, noted for perch and odd barbel. On the upstream end peg was Derek Jarman of Lobbys. The peg didn't give me great vibes at all, I was sat on a point with the river going away from me, and beyond halfway it was not moving,

Picture of my peg, after around 100 canada geese had landed on it, luckily none of them dropped a load on me lol. 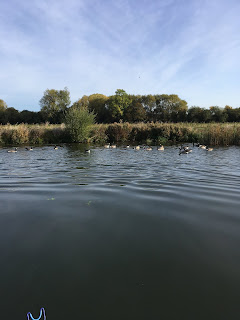 Looking down to my right Brian Melksham was a long way down, he had a tree downstream and opposite him but said he had a lot of weed in the peg. 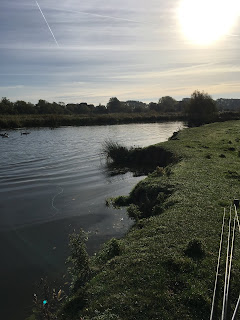 I got some rigs out and plumbed up one to find out the depth, It was deep at 4m about 7feet, but then as I went out it just sloped off deeper and then starting sloping up shallower. As the water was effectively flowing through the peg at 45 degrees it seemed this dept variation followed the flow, that meant I could not find any flat areas other than in the bottom of the "V". I was a bit miffed as I felt it limited my options, but you've got to get on with it. With the river being about 9 feet deep but hardly flowing I set up a 0/8g bodied float with 0.08 to 22, a 1g pencil rig with a 20 to 0.09, and a 3g rig for holding still with 18 to 0.10. I also set up a 1g float for fishing chopped worm down the peg, and a feeder for chucking across.

The match began at 10:30 and I fed 5 balls of groundbait mixed with soil at 11.5m slightly downstream. I put a few pinkies, casters, and minced worms in the mix but not much as I was worried this could be a hard match. I started on the pencil rig, but after 10 mins I hadn't had a bite on it, onto the 0.8 rig and not a bite on this either. It took very nearly 30 mins for the float to dip under and I came back with a very small dace. I got the odd bite after this and by the end of the first hour had 10 little dace, a gudgeon and a 2oz perch. 8oz would have been my guess. In the next 90 mins I caught a few more little fish but also had 4 roach which were welcome and a 4oz perch. After this the peg just got harder and harder. There were no bleak in the peg, certainly none on the pole line or closer in as I never had one all day. As a result I fed casters over the pole line thinking that they would be best in the hope of getting roach  or a bonus, but the pole line just went away from me, and Derek who probably had similar to me then hit a bream on the pole, he estimated it at 5lb and had caught it on a pinkie trying to catch anything. A bream rolled by his float about 5 minutes later, but despite his best efforts he could not get another.

From what I could see I thought I was beating the three lads below me, but was sure I would need a lot more than my estimated 1lb 12oz. I think this is where my match went wrong, I should have chucked the feeder across, short of some weed, in the hope of a bonus, but I tried the chopped worm lines on the pole, and they threw up zilch.

With about an hour to go roach started topping in my peg, the first fish I had seen top all day, I put all my effort into the 11.5m pole line to try to catch some of these roach. The pencil rig and heavy float failed miserably. The 0.8g rig was all I could get to work, I even caught a few roach on a caster, but then stayed on that bait too long, when I went onto a maggot I had regular bites in the last 15 mins. I had some nice 4oz roach, but to little to late I thought.

With the match over I was not looking at a good result I thought, it could have been worse as Brian hooked a bream on the pole below me but he lost in the weeds.

When we weighed in Derek had 7lb 10oz, so the bream was a big help, and he won the section with that weight (well predicted Shaun) my turn and 4lb 1oz, some nice roach in the end, just came on the feed too late. Brian had less than 8oz and I also beat the next two guys who really struggled. Sadly for me the three lads in the next field all beat me, Paul Passmore had 4lb 13oz, Chavey 6lb+ of decent perch, and John had 4lb 12oz. Just 4 points out of 8 for me. Not knowing the peg or stretch was a bummer, I certainly should have looked for a bonus across I feel, but can't say the peg really got my juices flowing.

Back to the pub and other than James Carty (who had drawn himself one of the worst pegs on the river) who had 2 points everyone else had done well it seemed, with Lee Trivett being joint first in his section.  Teams on the day went like this:-

As far as Thatchers are concerned to come second was a great result for us in the first round and it was just the start we needed. No fishing for me next weekend, could do with drawing a real flier to make things easy for me lol.

An open was fished at Swineford today, Results on this match are below, the long walks were worth it!