Due to the SWWL folding Thatchers now have to fish the Thames WL and as a result there are some clashes with the Com house. I was told by PC Barrett that I am fishing the Thames next week in the WL but that today I was to fish the comm house and not the practise open on the Thames. I was happy enough with this and didn't need to do much prep as a result, I did open a bottle of Glenfiddich the night before to get me in the mood lol.

Sunday morning and I was running a bit behind schedule and got to the draw later than I wanted. I ate my breakfast far to fast and was finishing it as the draw began, today the pegging was slightly different with two sections at Chequers for the first time in many years, a section at Jack Whites, two sections at Crane and only one at Swineford. People do not like the long walks at Swineford despite the fact it is the best fishing in my opinion, Chequers anglers can drop their gear off by their pegs but would the fishing be as good? As per my expectation I was up the Crane as I often am, my peg was the top end of the bay in the little ashtip field, a nice peg and I was happy with it, I had one peg below in my section and 6 above me. My only concern was that my peg had been battered on Thursday but hopefully not going to be an issue. 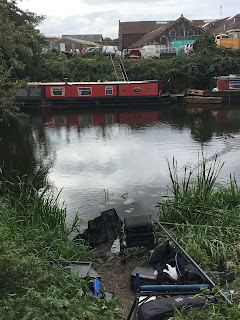 The river was hardly moving and was gin clear, the rain last week had already run out of the river, if any actually got in that is. I got my box in the water (this photo was taken after the match) and sank down but was OK. I couldn't see a big weight being needed in the section today, I thought 12lb would be my target and set up four pole rigs to "plunder" the roach. A 1.5g PB Silvers, 1g pencil float, 4x16 strung out, and a 4g for fishing over depth. Most rigs were with 0.09 to either 18 or 20 PR333. I did set up a crowquill but had no time to put a hook length on. I spoke to Glenn before the match, he was at Chequers and said he was regretting coming back on the river and his peg was shite and moaned like a good un!

When the match began at 10am I did not ball it in, yes you read that correct, no gbait went in! This peg is only about 8 to 9 feet deep and gets a lot of a pike problems, and as I am convinced pike like gbait I was going to go down the old way and loose feed hemp and casters at 11.5m. Well I was regretting this decision after an hour as I am sure all I had was about 12oz of tiny fish. However, if you loose feed only generally the peg should get better and so I had to carry on with it. Putting a maggot on the hook was a waste of time, it would not get past the fry, a caster was a little better and would get me the odd 1oz fish. Ninety mins in and all of a sudden I had a run of roach, not big but getting on for 2oz and this was better. Then they went funny and I struggled to hit bites on the 1.5g rig. I switched to the pencil float and if I could get the bait down I caught a few more roach. Eventually the tiny fish disappeared and this meant I could use all my rigs with just the odd bleak grabbing a bait on the drop.

It was a strange match, I often put the rig in and had no time to feed the hemp and then the caster as the float went under, but after catching 3 or 4 roach this would stop and I had to try another rig depth etc. At one stage I was catching on the strung out rig three foot off bottom and thought I had it sussed, then that died and it was back deeper. It was a real hard working match trying to catch small roach, but I was getting annoyed at the odd fish which I bumped or came off shipping back. A lot of fish were just hooked in the lip and after the match many people had the same issue. The plan to avoid the pike was working though and I had not had one attack. Below me Ben Rendall had struggled for a few roach but with an hour to go he landed a chub of over 3lb on the feeder, he lost another not long after. Below him in the next section was Shane Caswell, poor old Shane was on the first peg over the gate, a peg that should not go in really, I didn't laugh much at his predicament.

Going into the last hour I was hoping the better roach would feed, and I tried hemp a few times, I had the odd bite on it but hooked nothing, caster on the hook was still best. I was still swapping rigs and was on the pencil float with 20 mins to go when I hooked a slighty better fish, it might have been a perch, but I'll never know as a pike took it and bit me off. Back out and the peg had died, I was shocked the fish had gone after one pike attack. After 5 mins of no bites I gave it 6 big pouches of caster and sat on the 4g rig with double caster. The float went under and I had a roach, then missed a couple of bites and went out deeper on my 1.5g rig and had another roach and then the all out was called. I hoped I had 8 to 9lb but being short of my target was not thinking I would do great in the section.

The scales were up in the long ashtip and when they finally got to me Andy Britt was top with 10lb exactly and Kev Boltz was next with 8lb, I hoped I could beat Kev. I had a lot of fish but no quality, Ivan Currie on the scales thought I had more than Andy, but I did not, I had 1 ounce less, doh! Ben had 6 1/2lb below me, so I was second in the section.

One ounce, grrr, ah well it happens, I probably lost at least a pound of fish and missed the net with one when it seem to stick to my hand, such is life. 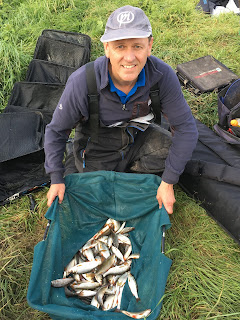 Back at the results and it seemed my lot had done well, with three section winners, two seconds and a third, and we did manage to the win the day meaning we have won the first two rounds, but Bathampton are close on our tail coming second both times. Winner on the day was Lee Warden, he was on peg 15 at Swineford and after balling it after a couple of hours he had 20 small skimmers for 21lb.  Second was moaner Glenn who admitted to 10lb and weighed 18lb, he lost the plot fishing paste it seems PMSL. Tony Gilbert was I think third and Nicky Johns 4th with 16lb+ and both were at Swineford wouldn't you know.  Other than Glenn Chequers was poor with 3lb a good weight, so short walk crap fishing or long walk great fishing... you decide?
Posted by Tim Ford at 20:18