I've not been fishing the last two weeks, needed a bit of a rest and as it turned out the weather was pretty poor last Sunday. Thatchers were entering a team in the Thames championship today but I did not put myself forward as I didn't want a long day, I've got to fly to Munich tomorrow for a few days. I'll not travel far next weekend either as I have to got Frankfurt for the week, all very busy at the moment.

Back to today, I decided to stick to very local and went for Windmill Fishery which is under new management. I haven't fished for carp for quite a while, so I had to sort my gear out a fair bit to make sure I had the right top sets, rigs and hooks. I got to the draw with 10 minutes to spare, I think some Thatchers traditional cider I had last night may have been the cause.... Dave Haines organised the pegs for the 12 of us who were fishing, it was good to see the lads from "Last of the summer wine" Bob Warren, Bob Price and Martin Alexander, lol. To be fair I hope I can be fishing and looking well as they are all doing, great blokes who've I've known a long time.

I drew peg 17, this put me on the gap between the islands, and with an empty peg either side I could fish to both points of the islands. Though the water level is so low here that you don't really want to fish right next to them as it is a few inches deep. 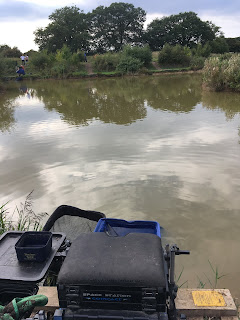 As I've not been here for some time I was not sure what was working, so I set up a few rigs to cover various options. First up was a lead rod with 0.19 to 16 PR38 for banded pellet, which I planned to cast towards the islands. A paste rig for 6m was set up, never had a bite here. A long line rig with 4X12 Tyson dibber for fishing banded pellet towards the right hand island, I had 0.16 to 16 KKB hook again for banded pellet. I set up two rigs for the margin, one to fish paste and one to fish worms or dead maggots. The only margin I could see was to my right but it was so shallow I went out till I found 12 inches and fished here.

Either side of me today were Martin Alexander on 19 and to my right Hainer on 15, opposite me just to the left on peg 4 was red Stu Barnett. Stu is doing well on commercials and so I'd keep my eye on him. We started at 10:30 and I fed soaked 4mm pellets at 6m, and hard 6mm pellets across to the island on my right and cast the lead over to it, an underarm cast was all I needed. 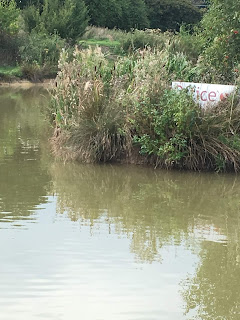 It wasn't long before the 8mm pellet in the band was picked up and the rod tip flew round. In fact the first hour was very good with a number of carp coming to the lead, though I did say it wouldn't last, and I reckoned on having 36lb, a great start. As I thought things went downhill and despite fish still being by the island they would not take what ever bait I tried. I did manage to nick one from the left island but this was the only carp I had here, this was the only fish in the second hour.

I tried the pole across, and couldn't get any indications, it seemed the carp were staying further over, eventually I caught one on the pole but only about 2lb. Martin Alexander came up for a walk and a moan as he was struggling, soon after he left me I had another small carp on the lead. This though was my lot for the third hour.

Halfway through and I was a couple of fish in front of Stu, and couldn't see anyone by me catching so thought I was doing OK. I tried the pole again and think I hooked 4 fish, lost 3 foulers and got one out. Then chucked the lead out and before I put the rod in the rest a fish was hooked. Sadly it was a one off. I was hoping that the margin would come to life, but I wasn't enamoured with the depth and I saw fish come in but I couldn't catch them at this stage. Stu had caught a couple of big fish in his margin and I was now thinking he was beating me.

I kept altering the feed across on the pole, the number of 6mm pellets, and I fished with a 6mm in the band rather than an 8mm, just because it was so shallow and the pellet would sink a bit slower. With 90 minutes to go the fish across started to get more interested in the feed and were visibly coming into the feed when I fed. Swinging the rig out was tough as the wind was a bit awkward, but I was getting a decent response now.  I would feed some pellets ship the pole to 16m, feed some more pellets, then swing the rig in. I'd get a bite / indication every time but missed a lot, certainly many were liners, and I lost and landed a couple of foulers, but I couldn't fish any shallower as the float was touching the 4" hook length. I did finally manage one carp in the margin, but wasted more time chasing shadows and missed fly under bites which I assume were fish spooking off. I ended the match fishing across and caught OK.

Stu shouted across that he had 105lb on his clicker, I shouted back I only had 92lb on mine. No one believed me, they thought I had over 100lb, but I had a lot of carp around 3lb. I soon found out that to my left the lake had fished well, with Matt Collins on peg 2 weighing 215lb  to win the match, he caught mainly in his margin maggots on the hook over gbait. Opposite Matt Dave Wilmott on peg 23 had 135lb and that was 2nd overall. Mar Summerhayes next to Dave had 97lb and that was third. I knew I was not going to get any coin but still had to weigh in of course, and my carp went 92lb 15oz, so accurate clicking today. Talking of accurate clicking, Stu's 105lb actually went 87lb, I think he got excited when he heard  City were winning 4-1 lol. Stu reckoned I had at least 8 more carp than him, which shows the difference in size of fish we caught. 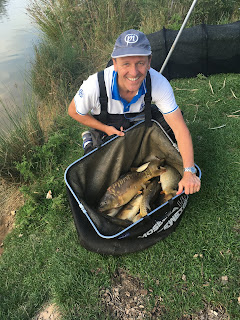 Last prize to mention is of course the silvers winner, and today that was old Diddly Bonk himself, Dave Haines. He had 17lb of roach and skimmers on casters, a nice bag, and he had a few carp on the caster too. 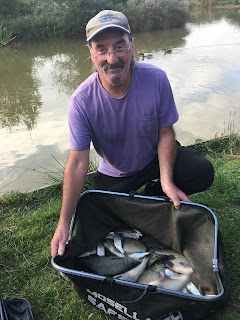 Nice day out, lots of fish in this lake, but they weren't giving themselves up easily at times. I could see carp but not catch them in my margin, and everyone was saying the same thing, except the winner Matt, his net was made up of a lot of double figure fish up to 15lb I was told, so well done mate.

Bit of bad news to end on, the South West Winter League has sadly come to an end. One of the teams could not get a team up and this meant we did not have enough teams to make a league. As a result Thatchers have been accepted into the Upper Thames league, along with Nomads. It will be a good league, but very tough for us to compete with the teams who have fished the venues for years. Of course I am gutted to be missing 4 matches on the lower Avon, one of the finest bits of river fishing out there. The remaining teams are using the dates to run opens on there as teams of 4, I think anyone can fish them, so if you fancy fishing the river give it a go.
Posted by Tim Ford at 20:20