Last weekend I didn't plan to go fishing as I was going to be away all week in Frankfurt. In the end I did sneak a few hours in on the river chew, I managed about 8lb of dace, a few roach and a 1lb trout. It made a nice change to fish a little river.

Monday to Friday I was in Frankfurt at an exhibition, it was a bit of a slog, early starts and late nights, and on Thursday it was our party on the stand, three hours after it finished I was waking up again. 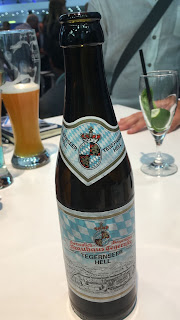 Suffice to say I was really looking forward to some serious sleep. However, Thatchers had entered a team in the Thames champs and were finding it difficult to get the 6 anglers needed and so I put myself forward. Waking up at 5:45 this morning was not really a lie in bed...

I got to the Swan at Radcot just a few minutes before the team draw was made by Andy Ottoway. He put himself on a good peg, and the rest of us were not sure what we had, James Carty, Andy Cranston, Martin Barrett and super sub Nicky Johns made up the team. I was at Clanfield, permanent peg 59, as I have never fished Clanfield this was an unknown quantity. I followed the lads who were in the other sections here, and eventually found my peg and parked behind it, very nice! Even better there was a pallet in the peg, happy days. 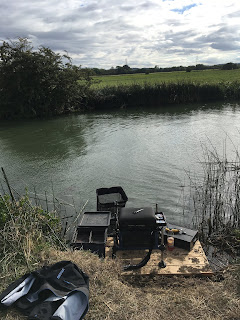 I struggled to see where the flow was, and as I had no idea of depth I got out a 1g pencil rig set at 10 feet and dropped it in at 6m, must have been about 4 feet deep here, so go out to 9m and still not much deeper, hmmm. I shallowed the rig to 6 feet and shipped out to 11.5m and then to 13m and the rig disappeared. Eventually I realised the peg was just getting deeper the further across I went. I settled on a line at 13m where I would feed a few balls of gbait and try 1g, 2g and a 0.4g rig for hemp. Inside this I saw no use in fishing as it was full of weed and during plumbing up I hooked it a lot. Right over at 16m was a hawthorn bush, It was deepest here, and I set up a 4g flat float for fishing chopped a worm. A whip for bleak and a waggler for over were also put up.

The match began at 10:30, and I cupped in 6 balls of gbait / soil  that had a little bit of pinkie, caster, hemp and chopped worm in. I started on the 1g rig with a caster on the hook, the float went over the gbait and did not go under, but I let it go a little further and had a bite and a little 2oz roach was swung in. The next few drops were a complete waste as the bait never got to the bottom. I picked up the 2g and tried again, even with this rig I had to push the bulk down to get past tiny bleak and minnows. Fifteen minutes in and all of a sudden the wind got up, it was coming straight at me and with nothing but fields opposite it was a fierce wind and became a nightmare. I was really struggling and tried a worm head, this got me my only perch of the day. Back on the caster and I had to fish overdepth to try to get a bit of presentation, out of the blue I had a decent fish on, a lovely roach getting on for 10 to 12oz. Bites were so slow that I had to try maggot / pinkie, but these baits were useless and were snatched by micro fish.

About 90 mins I fed the 16m line with a bait dropper of worm and caster. I gave it 15 mins and then tried it with a dendra on the hook, only had to wait a minute for a bite and fish on. It was not massive but a chub of 6oz was welcome. Unfortunately despite my best efforts I never had another bite on this!

Half way through the match and I was pretty fed up, not a lot in the net and the wind was really doing my head in. I was struggling to get my loosefed hemp to 13m, feeding maggots over was impossible , and generally presentation and holding on to my topsets was a challenge. A switch back to maggot on the hook, fluro, finally got me some bites, mainly from small gudgeon and occasionally a small roach. The 2g rig got trashed when I swung a fish in that fell off, and the rig tangled badly around the pole. The 1g rig sufficed, although it was really hard trying to get it in the right place with the wind blowing the bulk 3m towards me! I knew I was not going to do any good with gudgeon now (from the off would have been OK) and kept trying caster / hemp. I missed a few bites on hemp and did have 1 roach on it, but I think the wind was killing it. In the last 30 minutes I had fish on pinkie, and a few small roach showed up late.

The guy upstream of me said he might have 3lb, interestingly he said his peg was deep at his feet and shallow across, opposite to mine! Below me the Shakespeare angler said he had not had a roach and fished worm for most of the match and had 5 to 6lb. I hoped I might have 4lb. Packed away and was thankful I had not broken anything in the wind, a number of anglers had suffered broken pole sections.

The scales started from a couple of pegs below me, he had 2lb and was a local angler, next was Shakey who had 6lb 6oz, I had 4lb 2oz, and then the lad above 4lb 8oz so another who needs to go on an estimation course lol. Chip shop sausage for me then. I only lost one decent roach today, so not a lot more I could have done, unless I sat it out over for chub. My section was won with 7lb, which I heard included a 5lb+ chub. I saw a few more lads weigh in and I guessed I was going to be halfway in the 21 peg section.

Back at the results and Andy Ottoway had a nice day catching 12lb of small fish, James Carty had 6lb of bleak, and that was our two best weights. Sadly Nicky Johns had a bit of a mare, he had caught around 200 fish and thought he had 5 to 6lb, but when he pulled his net out he had a hole in it and weighed only 14oz for last in section. That put paid to any hopes of a decent result sadly. Think we probably ended about 8th, with only Otter picking up any dosh, Drennan Oxford won, they are very hard to beat on their local water so congratulations to them, Shakespeare were second.

No fishing again next Sunday, as on Saturday I am planning a few beers with friends and family to celebrate my 50th birthday, watch the Rovers then a pub crawl down Gloucester Road, everyone welcome.