Well after the bagging session on the river and hearing of another few good catches on the river I was sightly sad to be going to the canal, especially after some severe frosts. The draw was supposed to be at the Crown pub in Keynsham, but the landlord forgot so it was moved to McDonalds near Twerton at the very last minute. No problem and nearer to the canal.

I paid Andy Cranston for my bloodworm and joker, paid Nathaniel Johnson my pools and had a quick chat with a few people, and it was really good to see Liam Braddel turn out for our team but that was sure to mean one of the flyers gone lol. Liam did the draw for our team and came back with peg 7, I was in B section at Darlington up towards the wooden bridge in an area that was very poor in the Xmas match I fished.

I got parked up near the canal and walked past the entrance to the tunnels where 4 lucky anglers were, and then past the bay where Liam was, and past the straight where I fancied, here were Shaun Townsend, Glenn Bailey and Darren Gillman all in my section. I went round the bend and passed Mike Goodhind and Rich Whitmarsh, and then found my peg, close to Rich but a long way to Jan Macezck on the end peg. Got my box sorted in the canal and everything close to hand and proceeded to knock up some rigs. I could tell you all about the rigs but in reality only two of them caught me anything!

When the match started at 10am I fed the usual bread at 5m, also fed some joker right across at 11 o'clock and that was it for starters. 15 minutes on the bread and not a bite, tried a pinkie nothing. Rich also had not had a bite. Looks like it is going to be hard then! I finely chopped up two lobworms and fed these straight across with a tiny bit of joker added in. I tried my 4x12 wire stem, wire bristle jobby with 0.07 to 22 across with a pinkie. I had a bite and a small perch straight away over my joker, and then nothing... went over the chopped worm and had another perch on pinkie. That was the last bites on pinkie. Think after 40 minutes half the section were still blanking, it was crap.

Knowing the canal was now going to be rancid I fed various areas with tiny amounts of joker, hoping to get a few perch or ruffe lined up, well we can hope. I took another 2 perch over my joker line across, but was never to have another bite here. I never had another bite over the worm line either, and tried many hookbaits here. I spoke to Glenn and he informed me it was fishing just as bad round him too, so nobody was running  away it in our section.

I could not get another bite on the far bank and did not for the rest of the match. Rich though managed to get a couple across including a roach which was obviously lost. I caught another perch on my top set straight in front, the only bite there. I caught 2 perch fishing in close to the bank to my left, nothing to my right.  With about 40 minutes to go fishing 12m to my left up the inside next to a boat I had a perch and two micro perch in as many casts. This was the first time all match that I had seen any sign of fish by the boat.

Well I cannot say I was sad when the all out was shouted, I had 9 fish for about 5oz I thought. Every fish I caught came when I dropped the rig in, and if I didn't get a bite on the first drop on a line I had to move, so I did a lot of moving lines! I missed one bite all match and never lost anything. 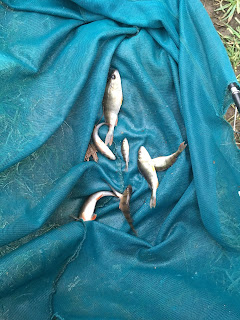 Mike Goodhind blanked, and then back round on the concrete Darren Gillman had 10 quality perch for 9 1/2oz and with that he won the section, well done matey and he is top individual in the league at present. Glenn was next and he had 7oz and won the B division with that, but got knocked out the knockout by Darren. Jeff Sibley had a few ounces, and then on peg 1 Towner had the most fish in section, but since they had only been born a couple of months ago they only weighed 4oz. Shaun had a pike in his peg before the match, and here in the picture he is holding the biggest fish he caught, a gudgeon, which was chased in by the pike. We did laugh! 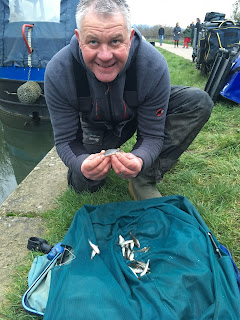 I ended up 2nd in A div and 3rd in the whole section, so decent enough for the team with just 6 1/2oz. Other than A section the rest of the canal was as shite as my section. With a few people breaking the 1lb mark but ounces taking section money.

A Section was the place to be, the first two pegs in the tunnels were superb, with Rich Lacey winning with 13lb, and Mark Williams next to Rich having 8lb. In the bay Liam Braddel had just under 7lb of small roach with bites all day. 4th place I think went to Steve Skelton up by the bay past the George where he managed a big skimmer plus a few bits for 2lb 13oz.

On the team front my Thatchers lot had 5 people catch and that was 2 section winners and 3 seconds, Nathaniel blanked and went home early to get pissed I imagine. Even with Nat going AWOL we managed to win on the day and we are leading the A div but only just.  Stand and Deliver won the B div I think.