Back on the River

I had a much different Christmas than any other before, this was due to me taking a holiday with the family to Cape Verde. I have been to Sal Island once before and thought it would be a great choice to get some winter sun as I have always wanted to have a "hot" Christmas. It didn't disappoint and the weather was great and I spent Christmas Day in the pool, and on a beach bar watching the sun set, it was great. 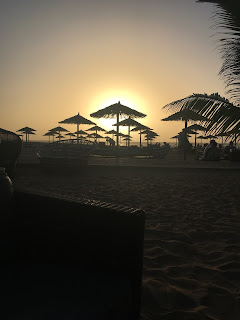 Before I went on holiday I ordered some bait with Scotts Tackle, I ordered 2 pints of casters and some dendras assuming the river would be more likely my choice and it would be coloured. However, when I got back it seemed there was no match on the river  Sunday 30th and nothing close to home, so after talking to a few mates I opted to fish Newbridge and picked up a day ticket when I purchased my bait. I got up early Sunday and grabbed a MacD's breakfast and got to the river at 8am. I spotted a couple of vans parked up, Warren Bates and Ben Rendall were already there and just going off to there chosen swims. They told me they wanted to catch some roach and Warren was going in 20 where he could see fish topping and Ben 24 where Warren had bagged up before the river came up a couple of weeks ago. As for me, well I fancied a crack at the bream and so I parked behind peg 18. As I was setting up another van arrived and bream slayers Jerry Pocock and Dean Harvey turned up, both complaining they were hoping to fish 18 lol. Jer went above me in 16 and Dean to his favoured 36.

As the light became better I could see the river was still quite pacey but the colour was now a greenish tinge, I haven't seen this for many years, it was almost as if the river had not been ran off and I really liked the look of it. I'd like to have fished a flat float, but there's not much space between the trees either side and I could see me struggling to land fish with the flow taking them downstream. A feeder it would be and nothing else as you can't run a float down due to the trees downstream coming out a long way. I mixed up some groundbait first, 1 bag each of Sonubaits Black and River, plus some brown crumb. It was then the easy task of setting up the feeder rod, a 3/4g open ender and a 14 PR355 to 0.13 powerline. I was finally set up and ready by about 9:15am. 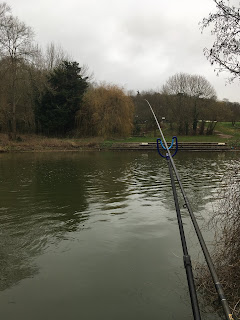 I began by throwing in 6 balls of gbait (containing casters and pinkies) out to about 15m, not as much my normal 12+ as I feel the fish are already in the peg and I was going to be feeding regularly from the start with the feeder. A nice underarm swing out with the feeder and with 3 red maggots on I was glad of rattle on the tip first cast, another bite next cast and then a roach. I then put 4 red maggots on the hook and on this cast I had a much better bite and for a few seconds thought I had a bream, but a skimmer of 1lb was landed. Wow did it fight well in the flow! The next two casts also brought skimmers and after an hour I had five of them in total. Going into the second hour I decided to start to introduce some chopped worms, not a lot of them though as Jerry had told me that in the matches on here recently maggot had been doing the damage. However, the addition of worms did no harm and I had about 8 skimmers in the next hour (from 1lb to 2 1/2lb).  Jerry came down for a chat as he had only had 3 skimmers and some roach, but my peg was solid and 4 red maggots was doing the damage every time. I did miss a few bites but some of the indications were definite line bites.

As it got to about 1:15 I had 23 skimmers and 3 bream, I really didn't want to put any more fish in my keepnet, luckily Warren had a spare in his van which I borrowed, I hoped it would not be the kiss of the death 2nd net syndrome. A skimmers and two bream were soon in the new net, but then all went quiet and for the first time bites stopped, I felt as if the bream had moved in and pushed the skimmers out, then the bream had backed off. I assumed this as Jerry started to catch some skimmers and said he was now getting an indication every cast. Dean Harvey rang to chat to me as he had heard from Warren I was bagging, he told me he had some scales in his van so could weigh my fish rather than estimating them. Dean was catching roach and landed a pike of about 15lb!

I had to pack up at 3pm as I was going to a family do, and with 25 mins to go bites came back and I had another 3 bream and 2 skimmers before I had to call it time. All day long I had used the same hook and hooklength, and I had only lost 1 fish, can't fault that. It was great to see so many skimmers in the river.

As I packed up quick I got the scales and then Jerry, Warren and even Dean came to see my catch and help me weigh them in. The net from Warren I used for 90 minutes went 25lb. The first net was much heavier, and when all weights were added up the final tally was 89lb 12oz! So close to the ton, it was there for sure but I'm not worried it was a special day and a lovely way to end my 2018 fishing account. I've never caught a net like that on a river in all my years, finally I got the right tactics, on the right day, on the right peg in the right conditions! Nearly a perfect day, just needed to hit a few more bites. 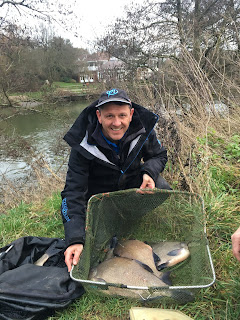 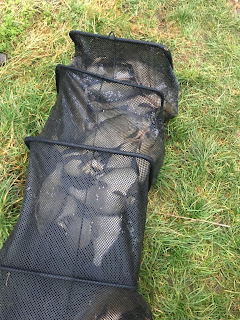 Let me wish everyone a Happy New Year and I hope the drawbag is kind to you in 2019, I just hope to continue to be healthy and happy and enjoy my fishing.
Posted by Tim Ford at 10:55