I will openly admit here and now that I wimped out of fishing this weekend. I saw the weather forecast for hard frosts followed by heavy rain, and a night out on the lash Saturday put me right off going. Quite honestly after seeing the number of anglers posting on facebook Saturday that had packed up due to being so cold and wet I feel I made a good decision. It was good to have a few beers out Saturday, and met up with my new Thatchers team mate Shaun Townsend, great to have him in our team.  For me the social side to match fishing is great, and it's one of the reasons I like to be part of a team, and Thatchers anglers are a great bunch of anglers who like to share their knowledge, a laugh and a few beers, and Shaun will fit right in.

After a relatively poor run back in 1999, I had managed to frame in the last match of November on the canal, so I was pepped up for the next match the Bristol & West Xmas match on the Bristol Avon fished from Swineford to Crane. I drew peg 6 up at Swineford, it's a few pegs below the outfall and is a shallow peg with plenty of flow and depending on the conditions a good bag of small fish can be almost guaranteed but there are also bream about. I really didn't think I would catch small fish on the peg on this day and I went down the one rod approach, a gbait feeder with 16 to 0.14. I cast the feeder two thirds the way over which I felt was about right as any further might get me into the weed beds which grow here. For the first two hours I never had a sniff, not a touch on anything, but in the next two hours I had 4 chub and 2 bream, and I also lost two fish. All the fish came to maggot or caster hook bait combinations, nothing on worm. I weighed in 18lb 12oz and that was good enough for 4th place and good pick up on the day.

The following Sunday it was the Bathampton Xmas match and the one you really want to do well in. The river had gone into a bad flood and was expected to be a struggle, most people wanted to draw in the trees, so when I pulled out peg 9 in the little field I really wasn't happy. However, when I got to the peg it didn't look that bad and it had a decent depth fairly close in. I set up two gbait feeders, one with a big hook, and one with a bigger hook lol. I was using my then usual flooded river gabit, Sensas Red Magic (pure stodge in my opinion though lol) with chopped worms and casters added. The only thing I had bites on was lobworm, and using bits, a half and even a whole lob, I used a size 10 to 0.14. I managed 6 roach and 4 eels, and I had 2 whacking bites on a whole lob which took the bait but I never connected. I also recall a strange thing, a swan which often came in by my net to feed decided it wanted to get out on the bank. As it swam in close over my line the rod went round slowly, I assumed the swan had touched the line but then the swan was past it and my rod was still going round! I picked up the rod and was attached to something huge, I pulled as hard as I could but this fish charged off down the inside of the river eventually snapping the line in a snag. No idea what I'd hooked. Anyway my 10 fish weighed 3lb 5oz and that easily won my section. You have to remember that in these days (before mobiles) unless anglers were walking the bank you had no clue of how a river was fishing, so I could not believe it when back at the results I could hardly find anyone with more than 3lb!  I ended up coming 4th and picked up £150.

Three framers on the trot, well could I make it four? Well the weather on Saturday 18th December was shocking, heavy snow, and on Sunday for the Docks Xmas match next it never got above 1C all day and was -8C at night. My luck deserted me when I avoided drawing the favoured Welshback area and I was heading towards Bathurst Basin. It was awful down here on the day, and I blanked, never had a bite run over lol!

I had one more day out on December 29th , it was supposed to be a feeder lobworm session on the river with Brian Gay for a feature in Match fishing magazine. However, Brian called me and we agreed with the conditions we were unlikely to catch any eels, instead it was a trip to Bathampton's Newton Park as Brian had the idea for me to fish for silvers on the prolific carp venue. Before Brian arrived I cast out a gbait feeder with some fishmeal in to look for a carp, no sign though. I then fished a 2 1/2AAA waggler with 18 to 0.10 feeding caster, I caught small skimmers and roach on this. It was an interesting day and varying the shotting and depth were necessary to keep bites coming. Brian had a go using my waggler, and I chucked the feeder out again and I caught a 6lb carp. Brian commented that he had not seen any other angler catch a carp all day, and he was chuffed that I had managed one and 12lb of silvers. In the the end he ran the article without the carp and called it "Silver Polish".  I was glad I could help him, but I will say I felt the pressure to catch for the cameras, and didn't want to cock it up!

I have lots of plans ahead of me now, so I won't be fishing next weekend at all and then not again until after Xmas (weather dependent lol). Therefore I will wish everyone who reads my blog a very Happy Christmas, and just like to say thank you to those of you who kindly tell me you read my blog and enjoy it. I was asked recently why I don't do any advertising on here, well this blog was never about making money, I originally did it to save me hours on the phone, or emailing people who asked how I did at the weekend or how I caught. It wasn't that I didn't like to talk to people (lol) but my boss wasn't happy with all the fishing talk at work! I then realised that I could hopefully pass on some information from my own experiences, and I know I've helped a few people and encouraged some back on to the bank. I've also met many new friends through the blog from simple pleasure anglers to seriously good top match anglers. For this I am truly grateful and it is more than I could of hoped for when I began hitting the keyboard nearly 10 years ago in January 2009. 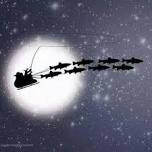