This match used to be on a Saturday on the canal (though many years before that it was on Frys ont he river) and I've always tried to fish it if possible. There were around 25 people fishing it today and I was hoping for a better day than the same match last year when I drew in section that was dire.

Mike and Nicola Goodhind were running the match and Andy Britt had pegged it. The town was not in as some of the pounds were dry due to restoration work, peg 1 was in the tunnels and Darlington was in as was up past the George. the canal has not been match fished for a while so I wasn't sure where I wanted to draw. I paid my pools, picked up my bloodworm and joker from Darren Gillman who had kindly ordered for many people. After Kev Dicks had drawn 4 pegs for the organisers I stuck my hand in the draw tub at the same time as a number of others. Peg 6 stuck to my mit, up at Darlington.

Drove to the canal and passed the peg on the duck ramp (peg 3) Steve Skelton, and then two in the bay Jack Jones and Jeff Surmon. I was probably 100 yards past Jeff which was a shame as I always fancy the peg just past the bay where it first narrows up, but moored boats meant it wasn't pegged. Forgot to take a picture but I was basically on the concrete in the middle of the two sets of steps opposite. Although lots of room to my right Ben Rendall on 7 was pretty close to me on my left. Ben asked me for some advice as we set up, as he said he doesn't fish the canal much, so I told him how I would approach his peg. I got organised and set up my rigs, a 4X14 with 18PR311 for bread at 4m, a 4x16 with 16 PR311 for fishing over the bread line and at 11.5m at 11 o'clock, it was a bagging rig if skimmers showed. For the far bank I set up 3 rigs; 4x12 with 0.07 to 20, 0.3g with 0.09 to 18 PR311 and a chopped worm rig with 0.12 to 16. Being an open match, and with the mild weather I was hoping to fish positive and get among some skimmers.

When the match started I fed a ball of bread at 5m. Some casters and a bit of chopped worm 13m across to my left, and some joker and casters 13m across to my right. Dropping in on the bread line with the biggest punch I had, it was bites straight away from small roach. To my right Jeff had a 2lb skimmer 2nd drop on bread, then after 15 mins Ben had a 1 1/2lb skimmer on bread and then lost one. Me... roach, small roach that started to struggled to engulf my punch. A few boats went through but the fishing didn't suffer. I finally gave in and tried a smaller punch and then hit more bites from these small roach. Just after the hour mark the roach were to small to warrant continuing and top ups had not improved anything. With no skimmers I hoped I might get some on the other lines, and I now fed some joker in gbait on my 11.5m line.

I first went across over my long joker line, using a big red maggot I had 5 roach in 5 drops, then the bites stopped. Out with the 4x12 rig with a pinke and 4 more roach and then bites stopped. I rested this line and went left trying caster, nothing, red maggot got me a couple of roach and a little perch. Back over the joker line and all I could now catch was minute ruffe, this was not good. Halfway through and I couldn't really make anything happen, meanwhile Ben was getting fish on caster. I had enough and went for a quick walk down to Jeff and Jack, both who had 4lb+ .

Back on my peg and I decided to feed 2 big balls of gbait and joker over my original long joker line hoping the gbait might see off the ruffe. I tried the 11.5 line again, a roach, a roach and then a 12oz skimmer, at last! No more skimmers from here but some roach before it slowed and I refed. Across over the converted line and a roach and then a proper fish hooked, it pulled out a fair bit of elastic and when I netted it I reckoned it was a 1lb 1/2lb skimmer. This line was now a bite a chuck from roach, but I kept thinking I needed bigger fish and tried bigger baits on and off without reward. The worm / caster line threw up a few small perch and roach but was never great and I forced this line which didn't work. I kept taking the roach from the two gbait lines topping up as soon as bites slowed. Ben then hit me in the ribs when he took another skimmer on his caster line, but lost two more straight after.

With 10 minutes to go all lines were fading, back over the 11.5m line and a small roach on pinkie so I put a big red maggot on again, the float didn't move for a minute and then buried, skimmer on! As I tried to ship back this fish swam hard toward me and to my right, this meant it put a lot of pressure on the elastic as I could not ship the pole back in the right place due to the angle and the walkers. The inevitable happened a head shake and the hook pulled out, damn that was a big skimmer. As I went to ship out again I could a boat coming up, I left the float there until it was about 5 feet from the approaching boat and lifted the rig out but a skimmer was on, but only for a few seconds then it was off too... fecks sake. The boat had one right over the line and with only 5 mins left I knew my chance had gone.

I packed up quickly as I had the scales and started weighing in with Andy Britt. he had 7lb 14oz which included a couple of decent skimmers, perch and a roach of 1lb 6oz.  Next was Nicola who also had a couple of big skimmers and had 6lb 14oz. Ben Matthews had 5lb 14oz, but this included a 1lb 13oz roach, wow! Ben weighed 8lb 2oz to win the section and then I weighed 7lb 7oz. Clearly either on the skimmers lost would have won me the section, but such is life and Ben had lost three of them. To my right Jeff had 7lb exactly, and Jack had 8lb 6oz. However, to their right it was SOLID in the first 3 pegs. 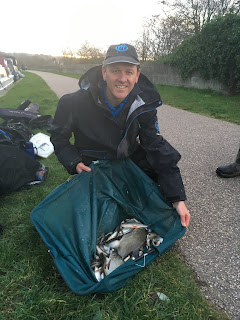 1st Dave Stiff  18lb, peg 1 a lot of small skimmers on worms, and 3 decent perch across
2nd Steve Skelton 15lb skimmers from peg 3
3rd Nathaniel  Johnson 12lb up by the school past the George, couple of skimmers and lots of small roach
4th Jerry Pocock 10lb  in between 1st and 2nd. 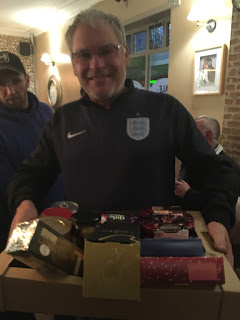 It was good to see plenty of people back at the results and Jamie Brown had come in to see his old mates. There were about 22 prizes, and so only a few anglers missed out on a prize, most of them came from the section up past me where it was a real struggle with Darren and Shane Caswell only getting 1lb+. Other than this area (by the wooden bridge) it has to be said the canal fished well and it normally does first match, so I wasn't totally surprised.

Not sure what to do next weekend, will have to see what is on but no idea at the moment.