Travelled back up here again as I been working most of the week in Munich and I didn't need to do that much prep for the match.

There were 24 people fishing today and with a club match on the back two canals this match would be on the lakes with 5 people on the first canal. I really wanted to draw one of the lakes as these are usually best for big weights with the larger carp. There were a few lads up from Bristol with Jack Jones back for another crack, as well as Aaron Britnell and Mat Sheppard. When the draw was done I was the only Bristolian on the canal, ah well, peg 48 smack bang in the middle.

As you can see from the picture I took the canals have a serious trim on the far bank. 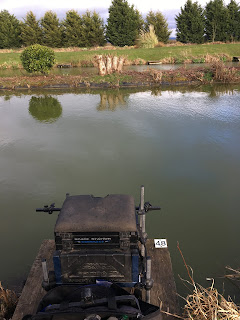 Having not fished on the canal for a while I was hoping I could catch a few and not get battered by the locals. Bait wise I had decided after last week not to take any maggots as the small fish were all that really ate them. So it was a simple bait tray, micros, 4mm pellets, corn and some soft pellets for the hook. Rig wise I was covering my options, a 4x10 for left and right margins, and across. A 4x12 F1 pellet for topset plus one, and a 4x14 for the middle. All rigs had 0.11 powerline to 16 PR512.

We started at 10:30 and I started down the middle, but this was a waste of time as I only had one skimmer. Already the lad on the right hand end of the canal on peg 53 was catching F1's well. I came in on the top set plus one line and finally caught an F1. I caught about 10 of them over the next hour when this then went dead. The middle was still rubbish and bar another tiny skimmer it was no good all match. I tried the margins and managed one F1 out of the left side, bit early I guess. I didn't really want to go right across as the wind was nasty again, so went back on the topset plus one line again. This needed a bit of nurturing but I started get the odd F1 again before once again they cleared off. I looked around the area but no signs.

The lad on 53 had slowed up after catching well in the first 2 hours (he said he thought he had 40lb) but I wasn't setting any fires alight myself now, but I could get the odd F1 in the margin, usually first time I put the rig in after resting it, and that would be it. I had to try across and so fed a little bit of micro via a toss pot and gave it a go. It was tricky but I got a couple of F1's then fouled a carp mid water (that happens a lot on here I recall!) which snapped me up when it got to the aerator. Another hooklength on and a couple more F1's before this had to be rested. This was the pattern of the day, catch a few rest it, go somewhere else, but as the match went on it just got harder and harder for everyone on the canal except for the guy to my right. He had only had 3 fish in the first 3 hours but was now catching carp down his margins, he fouled a few and got a ghostie out that was about 8lb.

I fouled another carp across, but despite it being hooked in the tail this one stayed on and it was about 5lb. For the last hour all I had was odd bites in the margin from mainly F1's and one small carp. I hooked one just before the whistle but after a few seconds it came off, whilst the guy on 53 landed an F1 just before the end.

The scales got to me fairly soon after the match had ended, the first two lads on the canal had low 30lb weights, and my nets went 63lb, so again a decent day's fishing. The guy to my right had 60lb after his late sacking with a lot on paste, and Jake on 53 did me for the section with 66lb. Oh well close again but no cigar.  I wonder if me not having maggots was a mistake, but the lad to my left fished them at 5m and struggled. Still lots to learn about this F1 lark, but it is fun fishing. The match was won by Nigel on peg 37 on Heron with 119lb on paste all close in.

Well spring is still not here, bit blustery and cold, and I didn't feel that special with a bit of sore throat and a cold it seems, urggh.
Posted by Tim Ford at 19:56