You may have noticed the lack of blog last week, this was due to me feeling unwell and I had no energy to do anything. During this week I have felt better but have had some poor sleep for some reason. However, I was going fishing Sunday but had to decide where, with the one less hour in bed and my lack of sleep I decided to stay local and get as much sleep as possible lol.

After spending Saturday in just my Rovers top enjoying the sun it was back to thermals for Sunday. The weather had changed as forecast and the wind was a cold one from the East I think. I got to Wetherspoons just after eight, it was empty bar one other person, clearly the hour less in bed had kept the alcoholics away lol. After I scoffed everything I was swiftly off to Windmill Fishery and was there by 8:45, fifteen minutes before the draw. I paid Dave Haines (now retired) my pools money and tried to glean some knowledge from the regulars. Paul Elmes who won here last week on peg 23, Shaun Townsend and Dave Wilmott were all fishing, so that was three flyers gone. There was about 14 people fishing and I drew about halfway, I pulled out peg 5 one I have drawn before. Dave Wilmott said to me he did not fancy it and said I'd do well to frame from there. I then realised Dave had drawn 23 and Paul had drawn 24! With Towner on that side of the island  on 20 it was already looking like being very tough to get in the top 3.

Got to my peg and on peg 7 was Tom Baker who fishes this venue quite a bit, and on peg 3 was jovial Chris Davis who didn't disappoint and got a few jokes in to make me laugh. Chris had over 100lb on peg 6 last week, but I thought the weights might be lower this week with colder and windier weather. I surveyed my peg, the far bank here is a good 16m away, but I didn't intend to go right in tight as it is very shallow. I instead looked for 2 feet of water which I found about a metre off the bank. 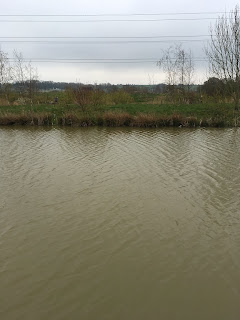 As you can see from the photo as per usual the wind was light before the match began! I set up a 4x10 with 0.15 to 18KKM-B for fishing banded pellet. I also set up a .4g float for fishing in the deep water at top set plus one and across at 13m in the same depth.... never had a bite in the deep water. Finally had a 4X12 set up for fishing in the margin where it was a bit deeper at 3 feet close to my right, and further away the 2 feet rig was the same depth.

We started at 10:15 and as normal the wind increased and it was going to be a pain. Chris started in his right hand margin and caught a few small carp quite quickly, I could also see Towner striking regularly, whereas I was sat like a gnome without a sign. It took me 40 minutes to get a bite and then I hooked 4 carp quite quickly and landed 3 biggest about 6lb. I had been toss potting in 4mm pellets and feeding occasionally with a catapult. It went quiet again and I had to wait a long time for another bite. I tried my margin early but unlike Chris I had nothing, and Chris had also dried up, but with wind being bad he stayed short whilst I persisted mainly long. About now 6 swallows flew by the lake, that's the first ones I have seen this year.

After about 3 hours I was on about 6 carp and 2 skimmers, but I was a long way behind the leaders I felt. I decided to have a change tactics. I changed the 4x12 rig to 0.11 to 18 PR412 hooklength and found 3 foot of depth across, so came further back from the far bank. The bottom here is just a slope, so when you find the depth you have to mark / remember where it is otherwise your hook bait can either be well on or off the bottom. The change of tactics was to try to catch some more skimmers as I felt my only chance of getting some money back was to win the silvers. I went in to winter mode and fed just micros via a toss pot, I was still fishing at 14.5m so it was still hard graft in the wind. I had a 6oz skimmer straight off, then a couple of 1lb carp, so at least the change was working. I was feeding very cautiously trying to prevent the carp from coming in, but after a short run of skimmers the swim died and feeding small amounts was not working, so I fed a full toss pot. This brought me a carp straight away and then another, but then a 1lb skimmer. For the remainder of the match it was just a case of working out what to feed and when. I had a bad 5th hour but then the last hour improved and a few more skimmers and small carp showed. I lost a few foulers, but there were never many fish in the swim today (they were all up at the end of the lake!) and that's perhaps why the skimmers kept coming back.

When the match finished Chris had already packed up and gone, from the banter I could tell it was close between Paul, Towner and Dave, I just hoped I had done enough on the silvers but knew that Dave Haines and Andy Gard would have both targeted them. Luckily my silvers weight of 12lb 11oz was enough to win the silvers, with Andy coming second with 10lb. My carp weighed 44lb 12oz so I ended with 57lb 7oz. Thanks for the photo Mike Staite. 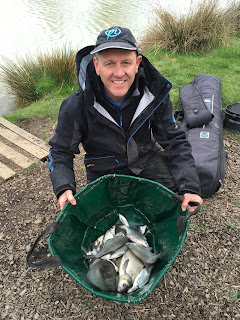 The top three in the end were... 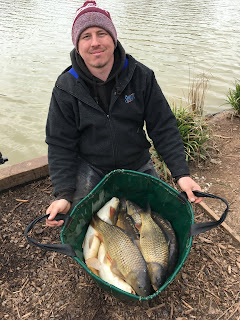 After the match it was back to the Folly pub where Paul and Dave bought the beers, nice one gents. A good end to the day and it was nice to be in the warm and have a few laughs. I'll have to fish on Saturday next week, where though I do not know just yet.