Another attempt to draw at the right end of the Windmill match lake unless the fish have decided to spread out. I reckoned that by the law of averages I should get a decent draw at it seems I have gone a long while now without one, well we can but hope.

Thatchers have two teams in a spring league canal series, there was a chance I would have to fill in at one stage but in the end I was excess to requirements. It was then the reason why I decided to stay local at Windmill and met Glenn Bailey and Mark Jefferies for brekky at Wetherspoons in Hanham. There was a virtual full house today, 23 fishing and that would put a lot of pressure on the fishery. If I could pick a peg here it would be (at present) 22 to 25 and peg 2, all at the car park end, and the further you go down the lake last time I was here the worse it got. Into the drawbag and sadly the bad run continues as I pulled peg 15 out, this is in the middle of the second island and is quite often left out. Very wide here and a few reeds opposite that can hold a few carp, but I was doubtful they would be in the vicinity today. For company I had Mark Jefferies on 16 and Lionel Legg on 14. My view.. 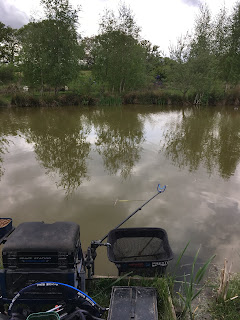 I will not lie I was distraught at drawing this peg, and after pushing my trolley to it and having a look and getting my box in place, I went for a walk. I walked around the whole lake taking a look at the water as well as listening to the birds and when I got back to my peg I had hatched my plan. It was a straight lead for the reeds opposite, and then three silvers rigs. A 4x14 for fishing top set plus 3 left and right with 0.10 to 18 PR516. A 4x12 for fishing on a top set in front, and a 4x10 for fishing top set into left margin and this would also do for fishing shallow.

When the match began I fed a small ball of micro top set + 3 to the left and a ball of gbait with maggots to the right. I fed some 6mm pellets across and cast the lead short of the reeds. Never had a twitch, so cast the lead tight to the reeds and never had a twitch. End of the carp fishing. I tried the micro line with a soft pellet but never had a bite, so onto the gbait line where I had about four tiny roach. I came in close where I had been feeding frugal amounts of maggot. I had some tentative bites here and a few more small roach. It certainly wasn't going to plan after an hour. Podge had managed a foul hooked skimmer and carp, next to him on 17 Martin Reyat had three carp.

In the second hour the micro line was abandoned as nothing was interested in feeding over it. The gbait line threw up two skimmers which might have been 3oz each and a couple more tiny roach. The close lines when tried after fishing further out always gave bites straight away, but if I caught one or two roach that would be it. The fish were mostly an ounce, and I was really not sure this was going to get me in the silvers coin, but all anglers down by me were struggling. I caught an occasional better fish, I remember most of them lol, a couple of 4oz roach, 4oz rudd, and a couple of hybrids 8 to 10oz. All these bonus fish came on the close lines.

Mark next to me was a little bored and took a couple of pictures of me, he said you don't get many action shots on your blog. Fair play cos I didn't net many fish today! 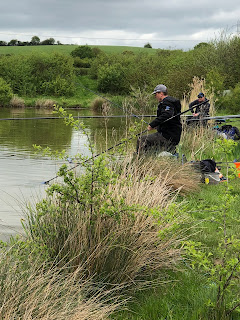 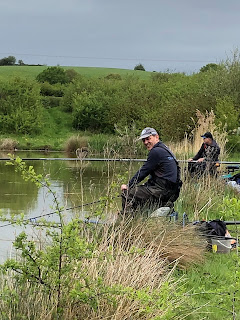 After a few hours anglers started walking, the lake was fishing very hard, but up at the other end carp were showing themselves in some pegs but were proving hard to catch. Mike Nicholls on peg 24 had quite a few skimmers and was way in front on the silvers front. With a couple of hours to go Mark decided to pack up and throw back his 3 carp, Glenn on peg 6 also packed up, not sure he actually caught. As my longer lines were dead I decided to start loose feeding maggots out to 13m, very very lightly. I tried my shallow rig over this and caught a couple of small roach. It was like the inside, catch a couple and then nothing, so it was a case of rotating three lines catching very little. I did catch an 8oz skimmer on the long line shallow, and with 30 minutes to go I caught one of over a pound and by far my biggest fish of the day. I did lose a lot of fish off the hook today, but I think it was because they were not really feeding and were also very small, all the fish I caught were very rough and sore having obviously recently spawned.

I must admit I was not that unhappy when the all out was shouted, I had no idea if I was going to get any coin as clearly Mike was taking the silvers top spot. The scales started with Mike up on 24 and he had a nice bag of skimmers that went 19lb 8oz to win the silvers, after that no more than 3lb of silvers was weighed in until me, my bag went 8lb 4oz and indeed was enough to get second in the silvers and some money back. I am glad I took the walk around the lake early on, I had come to fish for carp, but ended up fishing like I would on a canal and at least the float went under!

Overall the match was won by Geoff Francis who drew peg 23 and caught 6 or 7 big carp late on a waggler towards the island point on pellet for 50lb 1oz. second was Dave Willmot on peg 25 with 46lb 5oz, and third on peg 22 (again) was Chris Davis. With Mike winning the silver on peg 24 you can see how important it was to draw up that end, four pegs in a row with the money, and then me down the other end. I could be bitter about these guys who seem to draw the same area week in week out lol, but that's just their good luck at the moment and you've still got to catch them, so well done.

Think most venues have struggled this weekend, after a lot of hot weather the temperature has dropped and the fish don't like it.

Not sure if I will fish this coming weekend, last day of the football season and their could be cider and a late night involved!
Posted by Tim Ford at 21:06