Haven't been to Viaduct for quite a long time so when Glenn Bailey suggested we go there on Sunday I said yes. The match was on Lodge, a lake where the fish can be a bit moody and I was in the right frame of mind for it thinking the best fishing would be the last hour. We stopped in Canards Well for breakfast and it was very nice indeed.

When we arrived at the fishery we found out only 9 people had booked in, a shame as 10 are needed for the winner to qualify for the all winners final. I think a lot of anglers had either taken a rest after the 5 day festival here or were at the festival at Todber. Of course it could have been they didn't fancy a match on Lodge which had been pretty tough all week. The draw was done and I found peg 73 in my hand, a corner peg with a tree in it that you share with peg 53. Funnily enough Glenn had drawn 53 so we had to look at each other all day! The next angler to me on my left was Nigel Bartlett who would be fishing for silvers. I was happy to fish for both silvers and carp as you can get double bubble here. Picture below of my view of the Lodge. 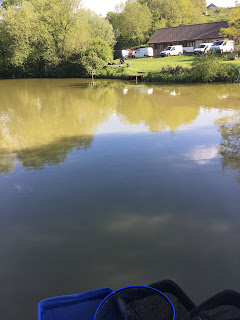 This peg has margins, to the right you have the willow tree, and I would feed some 6mm pellets here at 14.5m. It certainly looks sexy, but there was a distinct lack of fish here, no signs setting up of any carp at all. 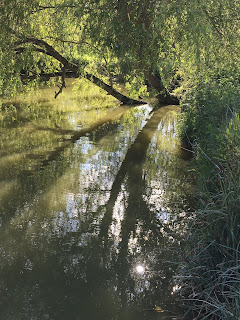 To the left there are some brambles that grow out into the lake and it is deeper here than the tree margin. I fished a top set + 2 here again with pellets. 4x10 rig with 0.17 to 16KKM-B same as in other margin just a deeper rig. I also set up a couple of 4x12 floats, one for fishing meat at 5m with 0.17 to 16 PR456, and another for fishing long with a soft pellet. A mugging rig and waggler were also put up.

Before the match started Nige told me there were a lot of carp in front of him and between us, they might move down later. The match started at 11am and I fed the long margin and the long pole in front only. Starting in front it was very slow, I had fed a small amount of 4mm and 6mm pellets hoping for an early carp, but all I had were a couple of tiny skimmers. Glenn had a carp after 10 mins on the paste, looked at least 14lb. I switched to the right margin looking for any residence, I was pleased when I hooked one after 5 mins and even more pleased when I got out in front of me. However, it then got under the brambles, got it out, went in again and this time got broke off. No more carp in the right margin just a couple of skimmers.

I went back out in front and changed my feeding around, just feeding a few 6mm pellets in a toss pot and firing a few by catty to spread the feed. By working at it I had a couple of skimmers and then about 1 hour and 20 mins in finally landed a carp. I took a few more skimmers from this line but as we moved into the middle of the match I couldn't get any bites and it was really fishing hard. Glenn only had a few skimmers to add to his carp, Nige was doing well on the silvers, but everyone was struggling with two carp the best!

I had thrown the odd dozen 6mm pellets into the left hand margin, and with just over 2 hours to go I tried this as I saw Nicky Ewers over on 59 get his first carp of the day and it came from his margin. I put an 8m pellet in the band and dropped the rig but it didn't settle properly, thinking I was on a bramble I picked the rig up and then felt something and then saw a swirl as a fish swam out, bugger. Well it wasn't a disaster as not long after this I had proper bite and fish on, but once again the brambles did me, aarghh! I tightened up the 19H elastic and went back in hoping there was another carp there, there was. This time I was able to get the carp away from the edge and scooped up an 8lb common. I had another carp before it went quiet and then I had a 2lb skimmer. Time for a change.

I tried the meat line, and I had to wait quite a while for a bite and then I missed it, and the next two, and then had a 2oz roach. Nothing here yet then... Back into the margin and just one big skimmer here, had I blown it? I glanced back out and noticed a few bubbles on the meat line, so had to try it again. This time I had couple of skimmers and then a decent carp, and after a ten minute wait I had another carp. I was now finally getting decent signs of fish feeding, and odd carp had showed around the lake. I had another couple of carp and then with less than 30 minutes hooked a beast that I believe was hooked near the mouth. It just fought so hard and fast it was incredible. Two or three times I got it from under the pallet, and then just as I thought it was coming in it turned and the topset exploded into three pieces, bollocks! 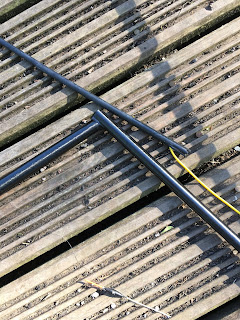 I grabbed the elastic but the fish pulled to hard and the line snapped and everything shot back. As I tried to deal with the mess I had I realised there was a cut on one of my knuckles and very soon it started to bleed, a lot. I carried on fishing though. Rather than getting a new rig and topset sorted for the meat line I thought I would try the brambles again, the carp were back here and I had another couple landing a double after the whistle.

Mat Long was doing the weigh in and started with Glenn, I asked if he could weigh me last so I could sort my finger out. His mum Helen then let me wash the finger and applied a couple of plasters. As I packed up the cut bled again and it seemed most of my luggage had some blood on it lol! 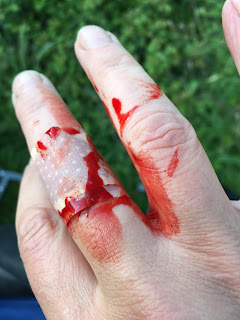 I wandered up to see Nigel weigh, he had 31lb of silvers which was a good weight on the day and easily won the silvers prize. He caught some skimmers on soft pellet but also a lot of fish on caster short. 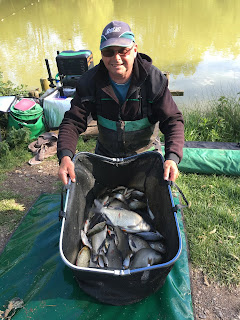 Glenn kindly pulled my nets out to try to stop my cut from bleeding, in the process he hurt his back! I had 18lb of silvers, and my 9 or 10 carp went 80lb, for a total of 99lb 13oz. That  was enough to win the match and Glenn came second with 55lb, so as you can see it really fished hard today! Unfortunately I forgot to get a photo of me with my fish, ah well. I was pleased that I had that late run of fish today, and I felt I got the feeding right, I fed very little as I thought the carp would not be that hungry after 5 days of matches. Could have done without the broken topset though, lol! Still it could of been worse, I was sat in the sun and at times was down to my T shirt, poor old Nick Ewers on 59 was freezing in the shade all day, and to top off a shit day he was actually shat on a few times by pigeons.. PMSL.
Posted by Tim Ford at 21:24