I really did not want to fish this league, I don't get on with canals in spring (some may say I don't get on with canals any time lol). However, this was the third round and with a few of the Thatchers team struggling to fish it I volunteered. Only trouble was I was working in Munich again, had plans Saturday, and so my time to get some preparation done was going to be very limited. Luckily Andy Ottoway came to my rescue lending me some top sets, rigs and hook lengths, this added to my canal rigs that had survived the winter league should suffice.

Sunday morning and I was up at 5:45 to be ready for Shaun Townsend picking me up at 6:45. It was a bright morning and the forecast was now for sunshine all day, not what you really want trying to catch skimmers. We got to the draw venue (Marlborough Football Club) in good time and I bought us some rolls and tea. Lucky Liam Braddell was doing our team draw, whilst James Carty was doing the other Thatchers team draw, and his team were winning the league after the first two rounds. Liam has drawn himself two end pegs in the last two rounds and won both of the matches, today he drew himself another end peg but said it wasn't that good, lol! I was handed peg A15 at Roadside, no idea where it was or what it was like, but we had the Sat Nav post code. Shaun dropped me off and he went on to his section Iron something or other.

Peg 16 was next to a bridge and was therefore an end peg, so I was close to one lol. James Carty was further down the canal and gave me some pointers on how he would fish it. I then struggled to the peg along the narrow and uneven towpath, thought at one point the whole lot was going in the canal, and I only had to walk two pegs lol! A nice bridge shame I was not next to it. 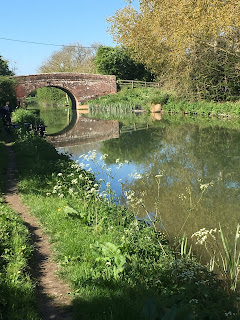 My view below, no features at all to speak of. 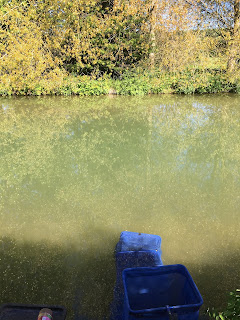 I plumbed up to get to know the contours of the canal, I could see it was shallow in close as I could see the bottom. After this the canal dropped off quickly to about 5 feet, it then steeply shelved up and I wasn't liking it at all. at 11.5m is was about 16" deep and soon after this it was a foot at best. I set up a couple of rigs for the track, not worth mentioning as I never had a bite on these. A couple of rigs for a swim about 2 1/2 feet deep at an angle (one bulked one strung out both with 22 to 0.07)  a tiny rig for fishing in the shallow water. Lastly a worm rig but I never had a bite on this either.

The match began at 10:30 and I fed 3 swims, a couple of boats had gone through before the start and had coloured the canal and the track was tried for 5 mins and abandoned until the colour went.  Fishing in the 2 1/2 feet swim had the same result. At this early stage the lad on the end peg, think he was called Steve Lee, knocked all of his groundbait in, oh dear! I picked up the shallow rig and went over with a pinkie on the 24 hook. I had a bite straight away and had a little roach, and I had a little roach on the next 3 drops and then a little gudgeon. Even in this shallow water I had to work the rig to get a bite, and was soon on a single squatt, but when a couple more boats came through my bites dried up. I decided to push the rig right over against the tiny bit of cover I had, and even though I had not fed here I caught two roach were a couple of ounces each. They were the only bites I had here.

Back on the 11.5m line and some more small roach and after an hour I would say I was doing OK and as well as anyone else. I tried the deeper 2 1/2 foot line but I could not get a bite here. I Caught a few more small roach across and then as 90 minutes had passed all bites stopped, and I mean stopped! On my right Ian Dunlop had been struggling but he now started to get bites and caught the occasional 4 to 6oz skimmer. He looked to be fishing the same as me, feeding the odd small amount of gbait and loose feeding some squatts over the top. As Ian carried on catching I went 90 minutes without a bite at all, then caught a small perch on the 2 21/2 ft line.

The rest of the match was awful for me, and I sat and watched Ian catch in little bursts, and then with an hour to go Steve on the end peg who had struggled for a long time started catching roach and skimmers by loose feeding squatts across in the shallow water (he later told me he saw roach topping down by the bridge and they eventually moved up to him. All I had was two more small roach and with 15 mins to go my one and only skimmer of about 3oz. It had been a tad boring and with no phone signal I couldn't even ring anyone to have a moan lol! Still at least I got to see a red kite and there was a cuckoo calling close by, rare these days so happy to hear one.

When the scales arived Steve weighed 4lb 8oz, my turn and only 1lb 13oz, then Ian who had 6lb 2oz I think. Oh dear "BATTERED!" I only beat one person in the section and needed some of those skimmers. I spoke to Ian after and he fished very similar to me, but surely I did something wrong? Well anyway he fished a very tidy match so well done. As it was Shaun had an even worse day catching just two gudgeon for 1oz, he was beat both sides too, but only by an ounce so not battered. Nick Chedzoy had 12oz which is good for him, and then there was Liam, well Liam had 8lb and came second overall.

Simon Hebditch won with 14lb, then Liam then Ian Dunlop, and 4th was Tom Morretti with a level 6lb

No idea how the team did, but pretty low down, and the "good" Thatchers side also blew out I think.

I cannot finish without mentioning good old Gary Etheridge. Gary was in my section a little further down. After the match whilst I waited for Shaun I chatted with Gary as I have known him since the 1990's. As we chatted he then went to one side of his car and starting making strange movements... Turned out Gary had a slow puncture (a flat tyre now) and he was giving it his all on a foot pump. Gary was struggling so I offered to help him, and in no time I managed to get 30 PSI in the tyre for him. He then advised he had put the spare on yesterday but it blew up, it was only 20 years old, lol!

No fishing next weekend, I'm going for a long walk to forget about this day ;-)