The reason for no blog last week was due to my spending the weekend away with my wife, we went to Worcester and onto Shropshire and finally Manchester where we saw my eldest daughter. We were away for our wedding anniversary (24 years) and I really enjoyed visiting some tremendous National Trust properties.

Where to fish this weekend? Well most anglers were on Tony Rixon's float only league, something I couldn't commit to sadly,  so I ended up deciding to stay local and give Windmill another go. Just hoping the carp were not spawning but what ever the fishing could be tricky at this time, just hoped I would have a better time on carp than last time here. When I got to the draw there was a low turn out, I assume to all the other matches where the regulars had gone to, so only 9 fishing. The wind was hacking down the lake and a quick walk down it didn't show much carp activity until near the end where the wind was blowing down to. A peg down here would do, assuming the wind got no worse. I was first to draw and I pulled out peg 1, this is at the opposite to where I wanted to be, I moaned a bit, but others told me it was a good peg and carp were moving on the point of the island.

At my peg and there were indeed carp moving over on the point so the signs were good despite the nasty wind which did get worse. 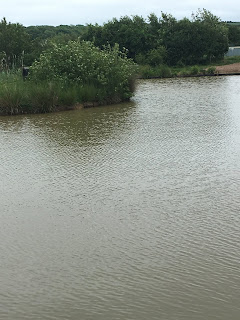 I set up a straight lead for fishing banded 8mm pellet, using a 14KKM-B to 0.17 powerline, and also a pellet waggler in case the wind dropped (yeh right). I only set up two pole rigs, one for slapping using a 16KKM-B to 0.15 powerline, and one for the RH margin where it was about 3 feet deep. A 4x14 with a 16 PR478 to 0.17 to fish meat. I had to chop some reeds down a bit so I could get into the margin, I could not fish right tight in as there were reeds under the water, so about a foot away from the bank it was. 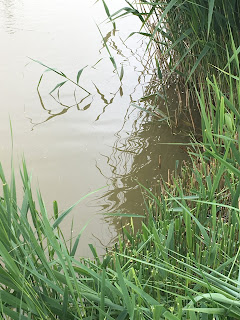 The match started at 10:15 and I began on the slapping rig at 14m feeding some 6mm pellet whilst I fed some 8mm pellet to the end of the island. After 25 mins I had not had one indication on the pole, so with carp still showing across I threw the lead at them. There were certainly a few there and the tip showed a few liners before eventually I hooked up with one only for it to snag me up solid about a metre out from the bank. Just past the first hour I finally managed to get a carp in the net on the lead, then it was just liner after liner and not a proper bite. I tried the waggler but the wind was just killing it.

I went back onto the slapping rig and hooked two carp and lost both, I assume foulers which is annoying when only fishing a foot deep. It was tough hanging onto the pole, trying to feed a bit of bait and also feed across, accuracy went out the window. By 1pm I had only 3 carp in the net for 11lb, but those anglers around me were not catching either. Luckily for me things improved after this, with a quick 3 carp on the lead, and then 5 on the slapping rig. However, each time you caught a few the fish on a line seemed to spook. Gerry Welch on peg 22 then started to catch regularly on a method feeder, he was casting to the other end of the point so I could his feeder landing and the swirl when the carp swam off. I did manage to get another couple on the lead at this time, but I also pulled out of a few halfway back, weird.

I'd fed some meat in the margin and tried it with 2 hours to go, I had a 6oz carp and a 2lber, then a 5lb carp. No more bites or indications here, I kept swapping between the lead and slapping just trying to get an odd carp and would try the margin in between. It wasn't until about 25 mins to go that I had my next bite in the margin, it felt like a decent fish and I played it out in the open water until twang! Bloody hook length had snapped! I chucked the lead out whilst I put another hooklength on the pole rig, and just has I finished the tip had gone banging round. Managed to grab the rod before it went in, reeled the fish back to about halfway and that one came off,  WTF!  I couldn't believe it! I dropped back in the margin with the meat and had to endure a couple of minutes of slight dips before a proper bite. This time hurrah I got the fish out, it was a double and my biggest of the day. One more bite and a tiny 6oz carp, all out.

I had 85lb on my clicker and with no silvers hoped that I would be right. Fishery owner Brad weighed me first, and my two weighs went 84lb 8oz. Gerry opposite (who was on the golden peg) said he only had 70lb, but there was one other angler Mark Summerhayes who I had been told had caught well, so I would have to wait till everyone had weighed to know if my weight would stay int he lead.  On peg 3 Nick Saunders had 68lb 14oz,  a good weight as he battled with the wind for half his catch fishing right over on the pole, like me Nick said he lost a lot of fish off the hook. When I got back to the car park I was happy to find out I had clung on to the win, Mark Summerhayes having 80lb 10oz from peg 14. The silvers was won by Bill Ferris with 14lb 11oz of hand size skimmers.

A shame there weren't more at the match, but similar to when I won at Viaduct a win is a win lol, and I was happy to pick up £50. I went back to the Folly to have a cider with Hainer.

Finally well done to my mate Glenn Bailey who won the float only today with 221lb on Carey peg 81.
Posted by Tim Ford at 21:29