After a great weekend away last week in Blackpool, even if the Gas lost, I was feeling rather achy. My wife and I decided to join a gym again (25 years after the last time) and I had gone to some classes and was feeling the effects. One class which involved lifting weights, squats and thrusts was full of women, mostly older than me, half way through I had to take a long break whilst the women made me look stupid lol. Only 2 weeks gone and I feel better for it and enjoy it, hopefully soon I'll be able to last a whole class.

This match was my first time out after struggling on the riverfest, the river had fished a lot better last week and with some rain might make the fishing better and the river have a little flow. Nick Chedzoy drew the team pegs but he had the last set and to be honest we didn't have what I thought was a decent draw. Myself I was on peg 49, a peg I've had before and it is a bit all or nothing as the flow is on the pole line and not much elsewhere. The peg is a long way off the water, and not for the faint hearted but it is something I am used to. Picture below shows how wide the peg is, but it's one of my worst pics, primarily because we had a lot of rain and the phone was kept in my pocket mostly. 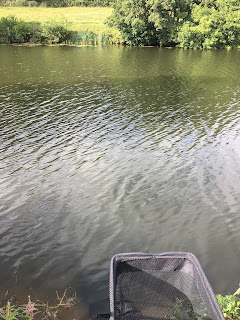 Set up the usual rigs for the pole, a 1.5g pencil float, 2g, and 3g and a flat float for chopped worm. Also a gbait feeder and a crowquill. I did not set up a waggler as this peg is so wide and has very little if no flow past midway. Also I know from drawing this peg before that the far bank is snaggy with weed coming out a long way and not great for fishing across. I plumbed for fishing the pole at 13m it was deep at least 13 1/2 feet.

I balled the peg at the start at 12:30 just as the first heavy shower arrived! I began on the 2g rig with a 20 N40 to 0.10 with a caster on the hook. Float buried first chuck and hybrid was swung out. Next drop another hybrid that I had to net, about 6oz. Two further hybrids followed and then some roach about 2oz. After 20 minutes the caster was rejected and so I switched to maggot to catch a few more roach and a small perch. On about 40 minutes the bites just stopped, and none of my pole rigs could induce a bite. I tried the crowquill and had another hybrid and a couple of roach before that too died. I spent another 30 to 40 minutes without a single bite on anything.

I was going nowhere when I tried the pencil rig again and the float settled and buried and I had a small roach, a couple of missed bites forced me to put a pinkie on the hook and I caught a few more roach, a small sized maggot was the best and I even caught an 8oz chublet. After about 30 minutes this died and despite trying all the usual top ups and hookbaits it was dead. This was a problem as usually the pole line is the banker on this peg and I was worried about things already. I was right to be worried as I could not raise a bite on the crowquill, nothing on chopped worm either (again!). Casting the gbait feeder out to just past halfway I could get bites from tiny chublets, tiny roach and even gudgeon. Putting on a big hookbait like a worm and 4 maggots was no good. I did try the crowquill over the top and had the same tiny fish but not easy to hit bites, I hooked one slightly better fish but a pike grabbed it and bit me off.

I kept hoping the pole would come right but it never did, and as the rain and thunder abated I gambled with an hour to go and reballed it, a roach first drop got me excited, but that was my only bite. I sat it out on the feeder in the vain hope of a bonus, but just a small perch and a gudgeon.

I thought I had 4 1/2lb and that was not going to be any good today. In fact I weighed 5lb 4oz and that only beat two people in the section Jerry Pocock and Ivan Currie. I was chip shop sausage though as to my left Andy Powell had 11lb some big roach and 2 skimmers on the pole, and to my right Mark Brush had a bigger 11lb some roach on the pole and some decent chublets on the feeder. Well that was a lesson for sure, maybe I had some soap in my groundbait lol!

The winner on the day was Dean Harvey on peg 5 in the little field, he had 3 bream and a couple of skimmers and a big eel on the feeder and chublets on the waggler for a great 29lb. Chris Parr was 2nd on peg 3 with 24lb and Charlie Valendar had 20lb on peg 65 with some big roach. Better mention Nick Chedzoy came 4th with 19lb on peg 124 otherwise he will moan at me I expect. 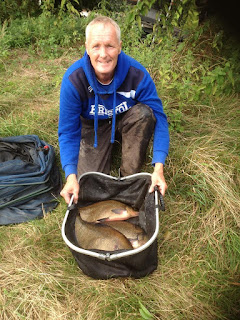 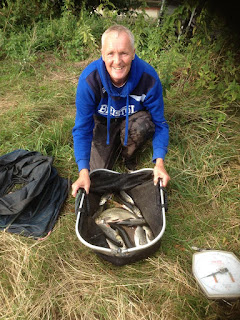 Diawa Gordon League won the day with 43 points, and despite my inepitude Thatchers came 2nd with 38 points. That means with one round left DGL are 21 points ahead and have already won the league unless they don't turn up. Thatchers are 12 points clear of third placed Garbolino Blackmore Vale and so need a good result to cement that place. I am not fishing next match, luckily I'm on a weekend at the races at Newbury as I may well have been dropped anyway! That said Thatchers are fishing the Div one National on Saturday and they will need a good draw as the venue Aire and Calder canal, and New Junction are producing some good weights but also blanks!

Onwards an upwards!
Posted by Tim Ford at 22:15