Well after a great weekend at the races last week (where for once I won more than I bet) this weekend was all go, watching cricket Friday night and a good gas win on Saturday and Viaduct Sunday. I haven't fished this league this year and was filling in as a stand in for Tom Magnall.

Me and my wife at the races last week, just before my first winner of three, and we watched Madness
after. 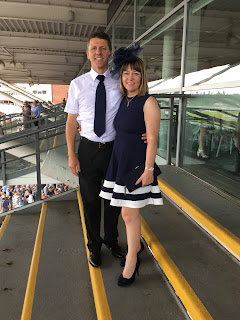 Having not been to Viaduct since my June holiday, and hardly done any carping I did need to some preparation, rigs, hook lengths and I had to put some elastic in my XS90 pulla kits. I did all this by Saturday morning so was happy. I was picked up Sunday morning by Rich Lacey, another angler with a van which meant I could have a good chat there and back. We were going to stop at Cannards Well for Breakfast but it was shut, looks like it is being refurbished, so bacon baps in a garage it was. At the draw I was getting the gear out and chatting and then noticed anglers walking to their pegs, the draw had started.I ran up to the Lodge and pulled out peg 112, a really good peg. As I had an open mind on what to fish for I now decided to target carp as on Thursday Norman Sterry on peg111 had 465lb!

Got to my peg and opposite me on the spit on 129 was driver Rich, on 110 was Paul Elmes and on 111 Russ Peck, both excellent carp anglers. I didn't see who was on my right on 114 as they were behind the tree branches. I was slightly worried about using the new pole today, I had forgotten my margin pole and that would have been useful for the bay to my right, but I would tackle that anyway with red hollo 11. Open up my holdall and get out my big tube of topsets, ummm where are all those new pulla kits, this is all river topsets! Well I assumed I had left the new top sets at home and all I had on me were some old top sets, one with 11 hollo, one with 13 hollo and one with 15 hollo. This meant my options were very limited and I had to decide on rigs. In the end a deep rig for fishing banded pellet with 16 KKM-B to 0.15, a shallow rig on a long line, and a 0.15 margin rig for fishing pellet. 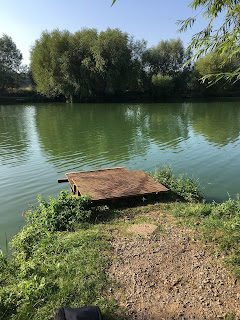 Obviously it was a long hot sunny day and this would make the fishing tougher but I was happy that a number of carp were showing before the match began. At 10:30 we started and I began at 5m on pellets, nothing much happened other than 2 skimmers. and it seemed quiet for most anglers. I was feeding 6mm pellets out to 14.5m and was soon shipping out the deep rig to try this line. It wasn't long before the float shot under and the 13h elastic was shooting off towards the opposite bank. It was obviously a fouler but I survived the initial run and was soon playing it on my top set where it was a waiting game. I was waiting for the fish to give up, but instead the top set gave up and snapped in my hand. Luckily I was able to keep the elastic under my control and eventually landed a 10lb fish hooked in the anal fin. I was now down to two top sets, so I took the margin rig off and was soon back out and I hooked another carp which soon came off. Then had a skimmer. Then I had another carp on which was a fouler and came off. I was soon into another carp which was fouled but I landed it and this was in the pectoral fin and near 12lb. One hour and 15 mins and I landed a carp hooked in the mouth, I now had three carp and a few skimmers. I had fouled all the carp right near the bottom, and even though there were no signs shallow I gave it a go for 15 mins but had not a single sign.

The next 90 mins were rock hard, with hardly any bites for me. Russ and Paul were not bagging and only had a couple more fish than me. I upped the feed on the long line and this worked in as much as I got some fish into the peg, but alas it was very frustrating as it was fouler after fouler. I tried different size pellets to no avail, I tried shallow on two more occasions and hooked two carp both came off as they were FOULERS! I did manage a couple more on the deep line and then switched my attention to the margin on a top set plus one. It was slow going but I managed to hook 5 carp and land all 5 as they were all in the mouth, and didn't snag me.

The match was over and I knew I was well beaten by Russ and and Paul so no money today. I felt like today I lost more fish as I landed so a good weight was on the cards if I could have sorted it out. A paste rig might have worked but I discounted it with only a couple of top sets. My final weight was 88lb something for no good, Russ had I think 109lb and Paul 169lb which was good enough for 2nd overall. Piccy of Paul. 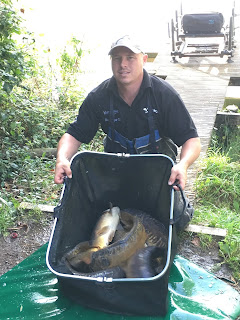 Winner today was Glenn Bailey on peg 85 who had 181lb of carp on paste, including a 21lb beast caught in his margin.  Silvers winner was Tony Thick 38lb 12oz on peg 95.

I don't know much else as I had to shoot off with Rich as he was going out, but I am sure Tony will cover everything on his blog.

When I got home and put the gear away I looked for my new top sets, couldn't find them. Looked in the holdall and there they were in another new tube, so they were with me all day, what a plonker!