It has been a blank two weekends on the fishing front, in fact three as it turned out. I went on holiday with Wendy to Zante again, a fantastic little resort where the people remember you and welcome you back with open arms (well the bar owners remember lol). That was two weekends taken up, and this weekend I was supposed to be fishing the Thames Champs, unfortunately I have some bottom issues this week and I was forced to pull out of the match and do my best to sort myself after a visit to the hospital didn't really help. Luckily in the end I went for a natural remedy; a hot curry and plenty of Cider, and wouldn't you know Sunday has been a good day, yay! 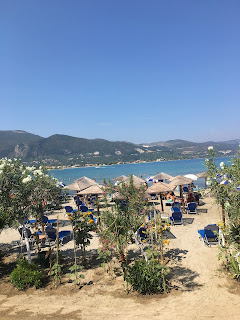 Of course I did have a shock in the meantime when I found myself on the cover of Anglers Mail. They had used my catch shot of chub on the River Tone, taken by the one and only Brian Gay. That was a nice surprise. 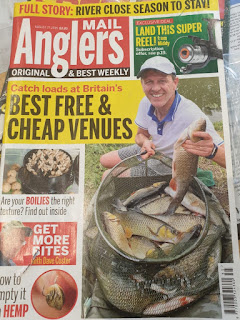 I should mention that the Thatchers team have not fared well today on the Thames and Geraint Powell who took my place had 3lb+ of gudgeon so I didn't miss much. It was also the last match where young Andy Cranston fished for Thatchers as he is moving on to fish for Dorking, so good luck to him I hope it works out for him.

I've not been able to fish as much during the summer as normal, and that's been due to me doing lots of other things which I've thoroughly enjoyed, I will have to sharpen up on the fishing front pretty quick though to compete as I have a couple of Riverfest qualifiers on the Thames coming up!

Back in August 2000 I was fishing the river Huntspill on a Superleague match and I had drawn permanent peg 92. I had 2 small skimmers on the feeder and after this only had tiny roach and perch. I had 5 eels and again some tiny roach and perch on the pole, all in all I only weighed in 3lb 140z, but this was worth an OK 8 points out of 11. I remember some anglers did well on the pole by feeding really heavy with maggots, catching some big eels and occasional quality silvers.  One week later and I was back to do it all over again but this time on a Huntspill open match and I drew peg 193. The feeder was better this time with 4 hand size skimmers and a bream, plus a 12oz eel. Double red maggot caught all of my fish, I got bit off by a big eel on the feeder that day and lost another on the pole. They were costly as my 3 kilo 350g was 100g short of winning the section.

After two decent matches it was back on the Spill for the Superleague. Well what is it they say "one week you're a lion, the next eek you're a dandelion". 13oz and I only beat one person in the section, oh dear!

Saturday 26th August and a bit of pleasure fishing at Witham Friary where I fished the top lake. I started fishing casters for the crucians, and caught for an hour before it died completely. I switched to fishing with luncheon meat and caught small carp up to 3lb. I used to cup decent amounts of meat in back then, but this was a day when I found throwing in 4 bits of meat was far better. On the Wednesday I fished an open match at Bullocks Farm on the carp lake which I am sure would have been run by Tony Rixon. It was certainly not like fishing commercials these days, and it was a long wait for bites. I managed 7 carp and a tench on meat or corn, 4 to the far bank and 3 on the margin. I had 30lb exactly and that was good enough for 3rd and some money.

A practice match on the K&A canal at Horton was piss poor, I had just 1lb 4oz of tiny fish and hardly caught for the last 4 hours. It was though still enough for me to be picked to fish the following week again in a superleague round. This time was a little better as I caught for two hours at 3/4 where I had fed 2 balls of gbait and loosefed squatt over the top, before having to fish tight across for the odd blip. 2lb 11oz was worth 7 out of 11 points.

Saturday September 16th and more pleasure fishing, this time on the Avon, I fished the high wall peg on the Crane. I fished a 7 n04 stick float with a 22 to 0.10. Feeding caster & hemp I soon had trouble with bleak and had to push the shot to a bulk just 10" from the hook. It was OK though and I had a good double figure bag of roach and dace. What I do remember that day is hooking a very large chub, at first I thought it was a pike, but it swam to the far bank by the boats and soon I had it back in the middle of the river. My heart was in my mouth as I caught a glimpse of it after 5 minutes, and then it came off. I'll never know how big it was for sure of course, but it was a whopper.

The following weekend was the first round of the Commercial House on Fry's the whole league of anglers used to be able to fish on Fry's. I drew upstream end peg 1 and didn't really fancy it to be honest, plus I had an angler pleasure fishing opposite. The wind was awkward and with only half the river available to me I fished a waggler down the inside and loosefed maggots, and tried gbait and caster just shy of the middle. The middle of the river was not great but as the match wore on the inside line improved and in the last two hours I was catching roach, dace and bleak with a 20 to 0.10. It looked wrong but the waggler was the only way to present the bait well and I enjoyed the match. 8lb 2oz was as it turned out a great weight and I came 3rd overall and picked up over a ton.

My last match of September 2000 was the first round of the ATWL at Keynsham. I drew the Crane, the peg below the High wall. The river was a bit pacey and coloured and not really conducive to this section as you wanted a bream peg for sure. I gave the stick float a go but the swim got to boily and I had just a handful of roach and bleak and was really struggling after 2 hours. With nothing to lose I fished the gbait feeder 2/3 over with a 16 to 0.14. It was all quiet with no bites, then out of the blue a proper bite, but it wasn't a skimmer it was a chub. Carrying on I fished double or triple hookbaits and ended up with 6 chub. My weight of 12lb 1oz won the section and if I recall correctly Martin Barrett was 2nd in the section with 6lb. I used to like the river when it was like this, as if I couldn't catch roach I would go for big fish on a feeder when a lot of anglers preferred the float. Of course it was a risk, but as I got to know the pegs I knew where it was right to fish for them, and if I blew out I didn't worry too much as the same result would have happened on the float. Team won the day, so a good start.
Posted by Tim Ford at 20:31