It seems a while since I have had to get up early on a Sunday, just my luck then that Saturday evening I developed griping stomach pains that had me concerned if I would be going fishing the next day. Whatever caused it I was up a lot in the night, but in thr morning the pain had subsided to just the occasional twinge.

I was glad to get the gear in the car in the dry, we had certainly had some rain overnight and more was forecast later. The journey to Clanfield is not so bad 55 miles and it doesn't take long to get there, I did though stop off in MacDonalds in Shrivenham to meet team mate Jack Jones. Soon we were joined by Mick Nowicki, Kev Bennett and Richard Chave. I got to the draw venue and was told I had to register quick, which I did and I paid my pools. Then said a few hellos to anglers chasing the dream, and there were plenty of top anglers here, Mark Downes, Sean Ashby, Simon Willsmore, Howard Kaye, Trevor Chalk and I'm sure I could go on! Good to see John Nobby Moody.  I was not far back in the queue, and was soon staring at the number 26. Thanks to a handy sheet I could see what permanent peg I was on, 46 which of course I knew nothing about. I didn't get any good vibes about the peg and so shot off to see it for myself.

To say I was disappointed when I got to the peg is an understatement! I was hoping for a peg with some nice tree cover so I could have a good go for a chub, what I got couldn't have been further from it. An open peg with a weedy bay and a great big red marker buoy. I'll get some more excuses in later don't want to use them all up at once lol. My view, the red buoy is of course to warn the boats of shallow water. 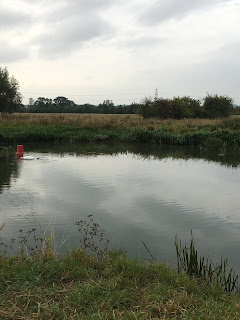 I began setting up and picked out a 1gm pencil float first and used this to plumb the contours of the peg and then check the flow. The peg was another of the sort I seem to bloody draw up in this part of the Thames Deepest part at 7m and it shallowed up from there as I went across, the main flow was also about 7m to 10m. I opted to fish at 10m as there were some small fish topping but not in closer than this. The peg was about 9 foot deep here, and the rig seemed to go through well. I also set up a 4x16 with strung out shot, if bleak were an issue I had a whip set up. I plumbed up at 14.5m in the shallower water and had a 1.5g bodied float with 0.15 to 14 N50 to fish chop worm. One of the organisers came along and told me he didn't rate my chances, but said they did catch odd bream on the peg across in the winter (later another angler told me that was in 1978).  I was ready for the all in for a change, the angler below me was Simon Willsmore and I did much prefer the look of his peg, with flow down the middle and a snaggy tree over. I couldn't see the angler above me as he was up past a bend and hidden behind the many trees below him!

The match began at 11am and I cupped in 4 balls of Sonubaits, black roach, crushed hemp and soil. I fed some worm straight away across as if there was a bream it might need a bit of time to settle. I dropped in with a caster (ever hopeful) and did have a two 2oz roach, though one missed the net. After a gudgeon I couldn't get a bite on a caster, so onto a maggot trying various colours and I could get the odd bite mainly from very small roach and gudgeon, I did get my best fish a 4oz roach on this early. Simon had balled it, and I did notice on two occasions he had a bit of elastic out so something a little better, roach about 6oz. An hour in going nowhere fast so onto the worm line, 15 minutes and no bites so I fed some worms.

The heavy rain had arrived and gone, it was replaced by a pain in the ass wind right in my face. There were a few boats on the river today, and due to the bend and trees above me when they came through my peg they were very close about 5m to 6m away which didn't really help matters. A short clip below of one example.

I was not catching anywhere near enough fish or enough quality, but my plan today had been catch what small fish I could and then focus on fishing worms for a chub, each time I tried the worm line though I had nothing, the bream were not interested or not there. With about 2 hours to go I found a shoal of gudgeon further down the peg and these came fast for a while, I caught on both the pencil and the strung out rig, though sadly any roach I did catch were certainly only 1oz. I had decided to feed another long swim further down the peg, but with some gbait and soil with worm and caster.  I tried this with an hour to go and no bites on the worm rig, but small fish were topping so I shallowed up the strung out rig and tried that with a caster, couldn't get it to the bottom due to bleak! Fishing 14.5m for bleak was not going to be an option now and never was for me. Finally snared a perch though on my chop worm line, it might have been 2oz, and I spent the last hour looking for that bonus with no reward.

The scales came up from the pegs below. One angler had 15lb, 2 big chub and perch from a peg that had recently thrown up 30lb, so obviously the current hot spot. Simon weighed 4lb 6oz and then I weighed 3lb 6oz, Simon's weight was enough to win the 5 peg section and get £50, he had 4 decent roach and a 6oz dace, and those fish made all the difference.

Poor old Jack Jones had hid 4 decent fish on his chop worm, but everyone was a pike, with the last one being 15lb. What a gutter! We both fished positive as we knew to qualify you needed some chub. The weights on my board didn't make good reading and 4lb was mega. Ah well one more go for me in this competition, next Saturday on the Thames at Reading. The middle section last year was full of bream and I think four anglers had a ton, I'll take drawing one of those pegs please!
Posted by Tim Ford at 20:27