I was feeling better this week and was able to get back to the gym and travel with work again. Also got up to the Cross Keys for a few ciders on Friday night with Martin Rayet and Glenn Bailey (late celebration of Martin and mines birthday). Though this night out was bad timing as I had to get up Saturday 5:30 for the riverfest, so getting in bed by midnight was a bit later than planned but twas a good night out.

Saturday 5:30 I was functioning OK but was a tad wobbly at first, but I was soon completely sober and wide awake as it absolutely hammered down with rain as I loaded the car and I got soaked. I had to change my socks, trainers and coat before I left. On the way up the motorway the weather was vile and I stayed well within the speed limit, other than that it was a straight forward journey to the draw venue, Beale Park. I met up with team mates Jack Jones, Geraint Powell, and ex team mates Andrew Cranston and Tom Moretti. We discussed the bream pegs that last year threw up four or five tons, and if you drew in that zone of 20 pegs you would have no chance if not on the bream. The other two zones were going to be roach matches and were more up for grabs. The pegs to draw were apparently 32 to 37, well I didn't manage to draw there and was on peg 16. However, Jack on 33 and Andrew on 34 were potentially in for a good day, drawbags lol.

After a short drive in my car I had a fair walk to get to my peg and I was blowing and soaking wet again but this time from sweating. The peg looked OK, I couldn't get into the water and had to fish off the bank, there was plenty of cover either side of me and lots of weed in close. The river is wide here but I wasn't planning to fish far out and was told there were no bream here. 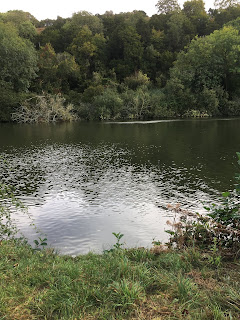 Despite all of the rain the river only just had a touch of colour in it and just a little flow. Two of the stewards who walked up with me told me that last weekend the river was tap water and full of Canadian pond weed. The photo below shows it was still clear in the margins. 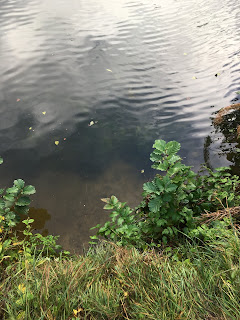 My set up was based around catching silvers on the pole, and maybe some chopped worm fish as again the stewards said there were some decent perch around. First up was a crowquill set up with 18 N20 to 0.10. This allowed me to plumb the depths around the peg and I found I only had 8 feet (thought it was deeper) and in some parts of the peg it was thick with weed. Out on the pole and I plumed around and ran a rig through, I had to go to 13m to decent flow and weed was only a problem towards the end of the peg it seemed. The wind was really gusting and mainly downstream and the float was clearly being pushed downstream. Rigs would have to be heavier than required, a 1.5g pencil float which would probably need to go under on the drop, and a 2g rig for easing it through. Both rigs had size 20 N20  to 0.09 as starting points. I also set up a 4x18 strung out rig with 18 to 0.08 for fishing hemp.  Lastly a chopped worm rig, but alas as I never had a bite on it, it really needs no more words.

I was ready with 12 balls of gbait mixed (Sonubaits black roach, river, lake and soil) just before the all in, and was soon letting fly. First rig out was the 2g to fish caster, and first cast a small roach, next cast a missed bite and then a dropped off roach. A much better roach was hooked and as I took the top three sections off the elastic was slack, grrrr. Another couple of 4oz roach and then another decent one hooked and I lost this one too! However, I lost this one as it weeded me and I had to consider how I played these roach. Bites went iffy and I went onto the pencil float which helped and I was getting regular bites but fighting the wind, I wasn't bagging by any means though, but I did get a 10oz roach which I got out by taking off the top 5 playing it for a while and then took two sections off to net it. I repeated that a couple of times with roach and a perch. I had started to get a bit of bleak tiny chub trouble and soon I was forced to push the bulks down. Sadly the peg was just going away from me, I tried hemp on the hook and didn't get a bite, and a few goes topping up didn't bring me any response and the loose feed just made the bleak worse.

The middle hour was really poor for me, and I could not see where or how to sort anything out and could feel my chances had slipped away. Bank walkers were saying there were a few anglers catching decent roach and those on the feeder had little to show in my zone. The bream were showing though in the expected flyers in the middle zone.

With about 2 hours to go and having not fed any casters for ages I was still hard;y able to get a bait past the bleak and if I did there were no roach. In desperation I tried a piece of hemp again. My confidence with hemp isn't great, not helped by needing glasses which makes it fiddly hooking it. Anyway first drop on the pencil rig and blimey I'm sure that was a bite! Then a roach yay! It was a bite a chuck on this and I'm sure I should have tried it earlier now. Again, it wasn't proper bagging, I was missing too many bites and the roach weren't all clonkers like you might hope. Still it was fun and when the wind dropped I got on the light rig and was getting bites on this every drop in until 35 minutes to go when Mr or  Mrs Pike turned up. Two strikes and this unsettled the fish it seemed, and this combined with the flow slowing right down it was a struggle till the last 5 mins when it was a bite a chuck again.

I knew my effort was not going to see me do any good, and I had not fished the best of matches in reality. I had come with a plan to catch big roach on caster and I couldn't, it was though in the end good practice and confidence boosting catching on the hemp. The scalesman gave me 11lb 10oz, and this was 3rd in my 10 pegs beaten by Dave Harrell on peg 12 qith 15lb, and Ian Young on peg 19 who had a brilliant 24lb of big roach to win the zone. Ian caught all of his roach on casters over gbait, and topped up throughout, interestingly he had no bleak issues, but had 5 pike strikes.

Down in the bream epicentre the match was won by Andrew Cranston with a huge 194lb who caught all match on the feeder! Take a look at the weigh sheet below for the weights, what a shoal of bream and skimmers there is that live here! Interesting is Jack Jones, he had nothing halfway through the match and then the bream moved into his peg, and he caught bigger bream than Andy, in fact in the last hour Jack had 72lb (put in a separate net) with bream to over 8lb. 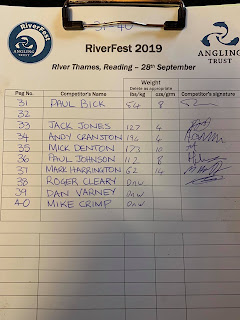 Well that's my lot for trying to get to the final, no success and not even close this year, and I know I must draw better and fish better than I have done and will keep trying.

I did not fish the Commercial House today but on a rising river at Crane and Swineford Andy Gabb won with 40lb of bream from peg 7 at Swineford and 20lb was 6th. Thatchers won the A div only dropping one point so a good day for the team. I'm back off to the Thames next week for the first round of the ATWL, Radcot and Lechlade area, I feel I'm due a decent peg up there, well you can hope can't you!
Posted by Tim Ford at 20:00