Another week passes by and another with a fair bit of rain at times. After a week of plenty of exercise I was feeling good, then started to feel like I had a sore throat and by Sunday morning I had a runny nose, cough and felt piss poor, great. My youngest daughter was going to pop back home and see me the weekend but she was sick, then Friday had to have our eldest cat put to sleep. Not the best of starts to a weekend for sure.

This round of the winter league was to be fished on the Thames around Radcot and Lechlade, I haven't done that well up here in the past, a mixture of bad pegs and not on the right methods. I was determined to ensure the preparation was good and all I needed was a decent peg. I felt bleak would be really important and so made up 6 rigs for them, four for whips and two for short lining. I was up at 6am Sunday and got away with time to spare, 10 minutes from McDonalds at Shrivenham I had a call from Shaun Townsend who was running late and asked me to pick him up some brekky from McD's.

At the draw I could see the river had plenty of pace which should improve things, the Thames doesn't really flood and go dirty as it is a lowland river and not a spate river. James Carty did the draw for us and was soon back with our set of pegs, I was up at Lechlade in A section, Pegs 1 to 3 are usually the best I was told, and I was on 6 with one peg below me. Lee Trivett reckoned I was on a shit bit, well that kind of shouldn't have surprised me really, I seem to be an run of crap pegs at the moment. Anyway off I went with Shaun following me as he was in B section and also not in the best of areas.

After a bit of a walk but nice and flat and no styles I arrived at my peg, though I did walk past it at first. Once again the tree lined far bank I longed for was not there, this week though I did have features in the form of boats. 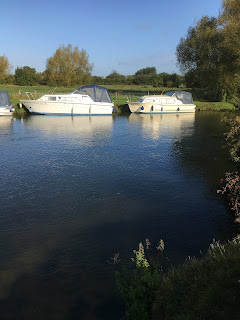 To the left of these two boats were more boats including barges with people on them, and a husky dog which barked at me constantly for an hour, not really what you want and eventually the owners had enough of it and chucked it back in the barge. I had to get in the water here to fish the peg, it was obviously a favourite dog entrance into the river by the state of the bank. Once in the water though all was good. The river flowed from left to right, I could see the bottom of the river a long way out so it wasn't looking to be deep. In fact when I plumbed up the most  could find was 3 1/2 feet. But there was weed everywhere it seemed and I was struggling to find a clear run. I found something to work with out at 13m but a fair way downstream. With the wind getting up and blowing downstream and into my bank, and the flow being pacey light rigs were a no go. In the end I set up one 2g rig and a 3g rig for here. I also set up bleak rig for short lining (whip would be a waste here) and a 2.5AAA waggler.

We started at 11am, I put 5 small balls in on the 13m line and went out with a caster on the hook on the 2g rig. Trying to get it to go through was a nightmare. Weed was still an issue and the wind was really blowing the water and float downstream faster than the flow. Ten minutes in no bites, onto the 3g rig and I put a maggot on and took 6 inches off the depth. I got a bite and a fish on, felt like a reasonable roach but I will never know as it weeded me and came off. A couple of runs through later and I hooked another and landed a 6oz roach. I had a couple more smaller roach and tiny dace, but it was clear this wasn't working.

I had a quick look short for bleak but didn't get a bite, so out went the waggler and I had some bites on this from bleak. I was getting bites most runs down and was at least starting to put something in the net regularly. After a while the bites went iffy, I tried deep on the pole but had nothing to show other than a few burst maggots so bleak were still about. I tried my bleak rig out at 13m, this was OK but I could not get them lined up really well as the wind was now battering the river and me and it was a real struggle to hold the pole at times. Red maggot on the hook was definitely the best hook bait for the bleak and odd little dace. I had to switch back to the waggler as the wind was now turning me around.

I caught on and off all match on the waggler, and also did manage a few bleak and dace at 6m, but it was literally just one fish here now and then. Fishing the waggler I still had to fish well off bottom to avoid the weed, towards the end of the match I did manage a couple of small roach on it but nothing to shout home about. By the end of the match I had about 100 fish. I had no idea what had been caught in my section but without any decent weight building fish in my net I was expecting the worst. The scales came up from peg 1 where Mark Brush made no mistakes on this noted flyer and had 15lb with some skimmers mixed in (he came second overall). Mike Bernstein had 6lb+ then there were two 11lb weights, one of roach and one of dace. The lad upstream of me was on the same shallow weedy water as me and he struggled for less than 4lb. Then I weighed 5lb 6oz. Finally the lad on the peg with lovely willow trees opposite had 10lb of roach and bleak. Sure you've worked it out that I only beat one person, so not a good day.

Some people said there "used" to be chub in the shallows, maybe if I had blasted maggots I might have hooked one, though with all the weed I'm not convinced I could have got one out. Other than this I cannot see it was possible to do anything else on the peg with the weed and wind, in fact a couple of guys back at the car park told me I'd done well off the peg, lol.

As we thought from the draw we had some tough pegs, to go with my result James Carty beat one I think, Andy Ottoway was last, and Towner beat a couple. Jack Jones won his section, Lee, Ian Pauley and Martin Barrett were second in theirs. Despite are four bad uns we scraped in as 3rd on the day, 1 point behind DGL, and I think 7 points behind Blackmore Vale, well done lads.  Winner on the day was Richard Chave with 17lb from the flyers at Radcot, I wish I could draw pegs like Rich, even if I only caught half of what he does!!!

I'm on the canal next week in Bath for the Commercial House, maybe a change will bring me a better peg my luck has to change before long.
Posted by Tim Ford at 21:36