Thatchers were involved in the second round of the ATWL today which was to be fished on the K&A canal at Horton. I wasn't planned to be in the team (I was asked to fish the Comm House last week) but one of the team had to pull out and I might have to fish. In the end Mat Challenger wanted to fish it and he took the last place leaving me free to fish this match on the Bristol Avon at Newbridge. I had kept a keen eye on the river level all week and whilst it was dropping it seemed like it was going to be a bit pacey and probably a feeder match, for this reason I only ordered a couple of pints of caster and half of pint of maggots, I had plenty of dendras and lobs already so a cheaper bait bill this week, sorry Mat!

I had managed to get rid of the man flu symptoms by about Thursday and had managed three trips to the gym and 2 games of football, all this exercise would help the long walks on the river. Friday night I went to a school reunion, I saw some people I had not seen since 1985, but we all got on well and I tried to speak to as many people as possible. The 80's music and general good vibe meant the Thatchers Gold went down too easy, and I was pretty hammered by the time I got home the next morning. It was a quiet Saturday (lol) and all I had to do was make sure I had the right feeder rods, feeders, hooks and line in the box as well as get some groundbait sorted.

The draw was at 9:30 Sunday morning, meaning I woke up without an alarm and was feeling much better than I did Saturday morning. I got to the cafe in Willsbridge and had a large breakfast which was really nice, I'd like Tony Rixon to try it and see what score he gives it. Dean Harvey and Kev Dicks run these matches together and they do a really good job. Twenty eight anglers were in attendance today so a nice number for Newbridge and the match was pegged from 3 to 77. I had a number of pegs in mind that I would like to draw today, 10, 18, 24, 36, 50, 56, 59 and 61. Pegs where bream have shown / are pegs I like to fish. When I pulled out 18 I was happy, and the last time I drew this I had over 90lb, but this season it has been really poor and nobody has done any good on it. However, after a decent flood and as I have done well on this peg many times I was still going with a positive attitude. 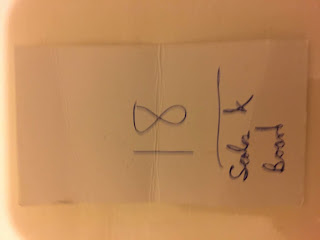 Drove to the river and I was disappointed to find I couldn't park behind my peg, I had to walk all of three cars length to get to my peg! Plenty of time to set up then, two feeder rods were assembled, but in the event I only used the one. My Preston Supera 12ft 6" 50g feeder with 2oz tip in, with a 28g open ender with 0.15 to 14 N50. I would dearly like to fish a flat float in this peg but with the pace it would be a bad idea as you are boxed in by two trees which I believe would make landing decent fish a very difficult proposition. I mixed my groundbait straight away and today's mix was Sonubait original Super feeder, Robin Red, and brown crumb.  I mixed about 3 kilo of dry gbait, far too much for the feeder alone of course, and split it up into two bowls as one mix would be wetter and for balling in. I had the board and scales and I was the last peg in the section, so all above me today. One of the best bream anglers around was next to me on peg 16 Paul Purchase, above him on 14 was Lewis Walker on 14. Above the bridge were Warren Bates 12, Dean Harvey peg 10, Mike Martin peg 7 and Ben Matthews on 3. 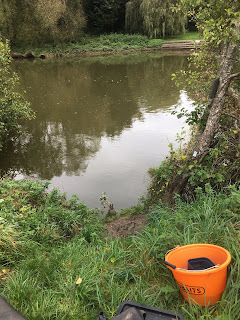 The match began at 11:30, I threw 9 balls of my red groundbait in at about 14m, then underarmed in my feeder with my standard opening gambit 3 red maggots. I actually had a bite first chuck but missed it. Next cast and I had a hybrid that might have been 8oz, I then missed about five bites which were obviously roach bites. Hooked the next one and it was a decent roach not far off the pound mark. A few more roach rattles were missed before a more positive bite and something really fought back for a while. In the flow I thought it was a bream but very soon once in close it was clear it was not, but up popped a hard fighting 1lb skimmer. I had a couple of small roach and a little perch to end the first hour.

Into the second hour and I was still getting bites but I was trying different hookbaits to see what was best, it seemed clear to me at this stage that I had no bream in the peg as I was getting small fish bites. Worm was a waste on the hook, treble red maggot or treble fluro maggot was OK, I also tried two maggots and two casters which I felt gave me a chance of a bigger fish. I took another couple of skimmers and a roach but wasn't making any real inroads into a decent weight. With a lot of rowing boats launching opposite and sat in front of me I popped up to see Paul Purchase who told me he had two roach for 4lb and with a few other fish I thought he had more than me. I went back and carried on, I wasn't putting masses of bait in the feeder, about 30 casters and a tiny pinch of worm to try and keep bites coming. It was just a steady middle of the match with very odd roach, but I had changed hook bait to double caster for the roach and I hooked two skimmers on this. It became clear to me that caster was the hookbait to concentrate on, and fishing double and occasionally treble I sat it out and got the odd skimmer.

With about two hours to go I think I may have been winning or second in the match, but I always expect bream to feed late and so new I had to get lucky. It was very difficult for me in the last two hours, bites had really slowed up, and only one skimmer and a roach on the penultimate hour was not good. I then heard from Mark Harper on 59 he had 5 bream, and Ben Rendall on 24 also had 3 bream. Into the last hour and still no sign of a bream, I lost a 12oz skimmer at the net, and then had another soon after. I then fished worms for the last 30 minutes praying for a stray bream, it didn't materialise but with 15 mins to go I did have another skimmer, and this one was near to 2lb and was my biggest of the day. The match was over at 5pm, and the rumours were that Mark, Ben, Chris Ollis and Craig Fletcher had bream, with the top 4 being paid in the frame I was hoping I could win the section.

I began the weigh in up at peg 3, Ben had a large bream and some roach for 9lb 14oz, Mike struggled for 3lb 1oz. Dean had a couple of skimmers and bits for 6lb but he lost a munter, might have been a barbel. Warren went on the float late on and he did well to catch 8lb of roach. Lewis had struggled 3lb+ and then Paul Purchase weighed, his two big roach had shrunk, as together they weighed 2lb 10oz (still nice fish), and in total he had 11lb 4oz. 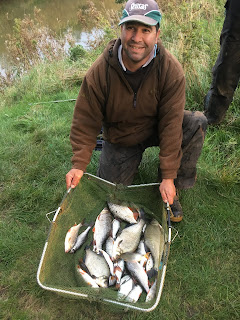 My turn and I had admitted to 12lb, but was well happy to see the skimmers had weighed heavy and I recorded 15lb 10oz and a section win. I had 9 skimmers in the the end. 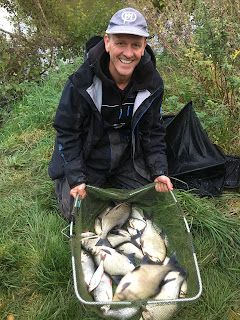 The results were at the Riverside pub in Saltford, and it took a while to get everyone back and some people did have a fair old walk to their peg. I sat down with the lads and still assumed I had only won my section as talk was of a number of 20lb+ weights, but when the results were read out and my section was paid out to Paul Purchase I was smiling.

Finally a pick up, and in the frame on the river, a long time coming. I did enjoy today, catching smaller fish on the feeder is always more of a challenge, of course a few nice large drop backs would have been welcomed, but I had to work at it and the match went by quickly rather than a drag.

Next week it is the commercial house, Swineford, Crane, Jack Whites. The river could be really good as no rain is forecast, about time I drew a right dolly lol!
Posted by Tim Ford at 21:36