After a dry week the river was dropping well and the match on Sunday was looking to be a cracker I thought, of course a long came the rain and messed all that up. It was just a question Sunday morning of how bad the river would be and feeder fishing would be the main stay with a few pegs OK for bits shallow. A draw at the Crane would be best I thought but nobody can really tell from the draw what your peg is like until you get there and see it,

I was team captain today, and had the duty of collecting pools money and drawing for the team. I pulled out end peg 7 for the team, which meant someone would be on the cattle grid end peg, that turned out to be Guy Manton. I myself was in B section at Swineford but until I got to my peg I didn't know where. It was going to be a long walk, and I kept the warm clothes off, getting the gear over / through the first kissing gate at the end of the first field was OK, and a couple of pegs past this was team mate Rob Manns, he had a steady peg but quite some weeds in it, I carried on walking up past the second field where all the pegs had some slack or steady water, and as I did it dawned on me where I was going to be. The last push on into the third field past the high bank, on peg 27 was Ben Rendall, the water hits the inside here and his peg was a mess. I was on 28 and basically it is the same flow in close and not going to be good. 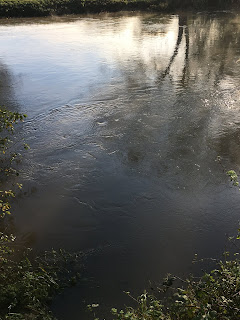 I was going to have to fish standing up as there was no way of getting a box in place. First job was to mix my gbait, where was it? Bugger it was back at the first gate, and I had to walk all the way back there to get it, I was warmed up nicely lol.  Back to the peg and I cut a few steps out and felt safe, then set up a feeder rod and put a large lead on to feel around the bottom for snags and see how deep it was. There seemed to be a lot snags and only at the uppermost part of my peg did I find a clear area with about 6 feet of water. Further out it was bombing through and very boily. I opted to go heavy to keep everything in place and tight to see the bites. A 60g Preston Open Ender with a size 12 to 0.17 and a 4oz tip in the feeder. The 4oz tip was not needed but I thought it might help distinguish the bites better.

We began at 10:15 I dropped the feeder off the end of the rod which was only about 6 feet from the bank, above me Ben balled it in. I had no plan to ball it as I wanted to be sure where my bait was. I probably had ten casts when Glenn called me to tell me he had caught a fish and as he did I had a bite but it didn't develop. I reeled in to find two chewed maggots and an untouched worm, so cast out this time with four flouro maggots, and it didn't take long for a decent rattle to materialise and I was glad to see a fish pop up, a 3oz chublet. No more bites on the maggot so that was a one off. A few more permutations before I popped on a lobby tail. I had three casts on this with no sign, and on the fourth cast the tip went within seconds of me putting the rod in the rod rest. I connected and a roach of maybe 3 to 4oz was bagged. Again this was a one off, and I never had another bite on a lobby.

The river was changing all the time in close, and sometimes it would look OK then it would push and boil and any leaves would hit the tip hard, but I was able to tell the difference between this and bites. Trying a dendra with a couple of flouro maggots again and another bite and a small dace. Not long after Lee Trivett walked up, his match had been cancelled, and Lee saw me catch another dace. From the Crane, up walked Mat Challenger and I chatted to these two for a while hearing about other people having more fish than me lol. Mat saw me catch a little dace and then went on his way. I spoke to Ben on and off all day, well we had to keep ourselves amused, and he was still blanking.

My match went poor for the next 90 minutes with not a single bite on any bait, and I lost 4 or 5 hooks and also a feeder. Ben then caught a roach and said he had missed 3 bites. In the last hour I had small roach and then a beauty of a fish that you don't see that often, a bullhead! 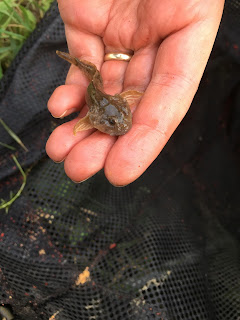 I had heard that Dave Stiff had 2lb so I spent the last 30 mins on a lob looking for an elusive better fish, but it never came.

With the match over I packed up quickly and took my gear down to the gate by Dave Stiff so I could then get going once weighed, as I did this up came Ivan Currie and Paul Purchase with the scales, I had the board so we started in my peg. My little bag of fish went 14 1/2oz , Ben's roach 4oz and that would be the only person I would beat as I expected. Dave had 2lb 3oz lots of small roach and he said he missed about 20 bites. Then Paul Purchase in a nice looking peg had 2 bream and 2 skimmers plus bits for 14lb+  enough to win the match. Ivan had 3lb 6oz of bits and Shane Caswell 1lb 8oz.

Paul with his bag. 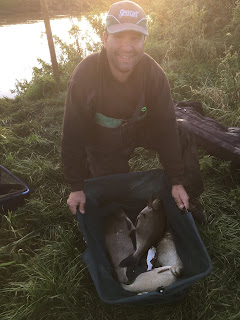 A nice steady walk back and I was glad to get back into the pub for a cool glass of Thatchers. Lee Trivett was back in the pub for a chat with the team, he told me my peg looked the third worst peg on the day (Ben above me having the worst, and Derek Coles having the second) and I can't believe I have drawn a shite peg again, I thought I might be on the start of a run of better pegs.

Team wise we had done well it seemed, with two section winners, and we did manage to win the day beating both of the Bathampton teams and we have a healthy lead going into the last round.

All of these anglers had a bream in the net so well done.

No fishing next weekend, then it is the Poppy match the week after which seems to be a sell out.
Posted by Tim Ford at 20:00